Will I See a Ghost

WILL I SEE A GHOST?

“Will I see a Ghost?” is the one question I am frequently asked at the beginning of my tour.  Either that or “Can you guarantee me a ghost?”  I also have had the occasional review that says they loved the tour and the stories told, but they couldn’t give the full 5 stars as they didn’t see a ghost!

The truthful answer is no, I can’t guarantee anything paranormal-wise.  I can’t guarantee that you will see a full-bodied apparition, a shadow figure or even something resembling Casper.  I can do many things in life, but producing something on command, something that we really don’t know much about or even how it works is a tall order.  Having any available entities perform for my guests night after night would be interesting, but not possible I’m afraid!  Although thinking about it, how boring would it be if we knew what was going to happen every night, rather than not knowing what to expect?  The motto at Haunted Horizons is and will always be ‘Keep it Real’ and that is what we do.  Putting something on for people to believe they have had a paranormal experience is NOT an option!

The lucky ones are those that are ‘gifted’ and claim to occasionally see, feel or hear a ghost.  Unfortunately, for those of us that are as psychic as bricks, we have to rely on the generosity of the few to inform us of anything around the tour group.  Even then, any gifted person would tell you, there isn’t always someone ‘at home’.

I have often thought how cool would it be to be able to say to my guests at the start of the tour “those who want to be possessed, make sure you visit room 2.  Anyone wanting to touch base with a demonic entity, he’s waiting for you upstairs, take care as it’s a bit warm up there and the creeper is lurking around the corridors somewhere!”  In normality, the paranormal isn’t like that.  In normality, it doesn’t happen all the time.  In normality, none of us knows if, or even when, something unusual or possibly paranormal will happen.   If it happened all the time it would be called normal and not paranormal.

So why do a few people expect to see a ghost on every tour and ghost hunt we do?  Are we possibly conditioned to expect to see an apparition?  It is a Ghost Tour after all!    Or are there other factors that we have to take into account?

Well, my theory is …. we have numerous horror/ghost films that depict haunted homes and locations.  You can guarantee that every one of these locations has at least one, if not many, creepy figures, frightening the bejesus out of the owners, making their lives a misery.  It’s nearly always the same storyline too.  There is one parent and/or possibly a child that is affected, everyone else thinks they are going through a bad time or need to cheer up until the inevitable happens.  The whole family starts to be affected, the last one being the sceptic.  As soon as the non-believer has their own experience, they all end up leaving the building during the middle of the night, never to return again!  Sound familiar?

I know that some of the films claim to be based on real occurrences, but they tend to be VERY loosely based on the actual story.  There can be and often is an awful lot of poetic licence involved.  The reason for this?  No one wants to watch a film where they just heard footsteps walk down the corridor or saw a figure pass by the bedroom door!  It’s so much better to have items, as well as the odd person, thrown across the room or dragged out of bed because they had their foot sticking out the blankets.  The stuff of nightmares!  Or how about a certain family member being possessed, be on the brink of death and require an exorcism from an elderly priest who has carried out this procedure numerous times before, but finds this one the worst and most powerful entity he’s ever had to deal with!

What about all the ghost hunting programmes we have on TV or even some on YouTube!  Does watching these shows make us believe that you will enter a known haunted location and see a ghost every time?  If not see a ghost, at least feel one or have one follow you all the way home?  Are they really having that much paranormal activity happen in the short time they are there or do they film for a number of hours or even days? Is the footage then clipped and put together to show more activity than there really was?  What happens to the footage from the venues where nothing happens?   If nothing happened on one of these shows, would you still watch it?  I know I wouldn’t.  I want noises in the distance, I want EVP’s (and boy, they seem to get a lot of them), I want action! 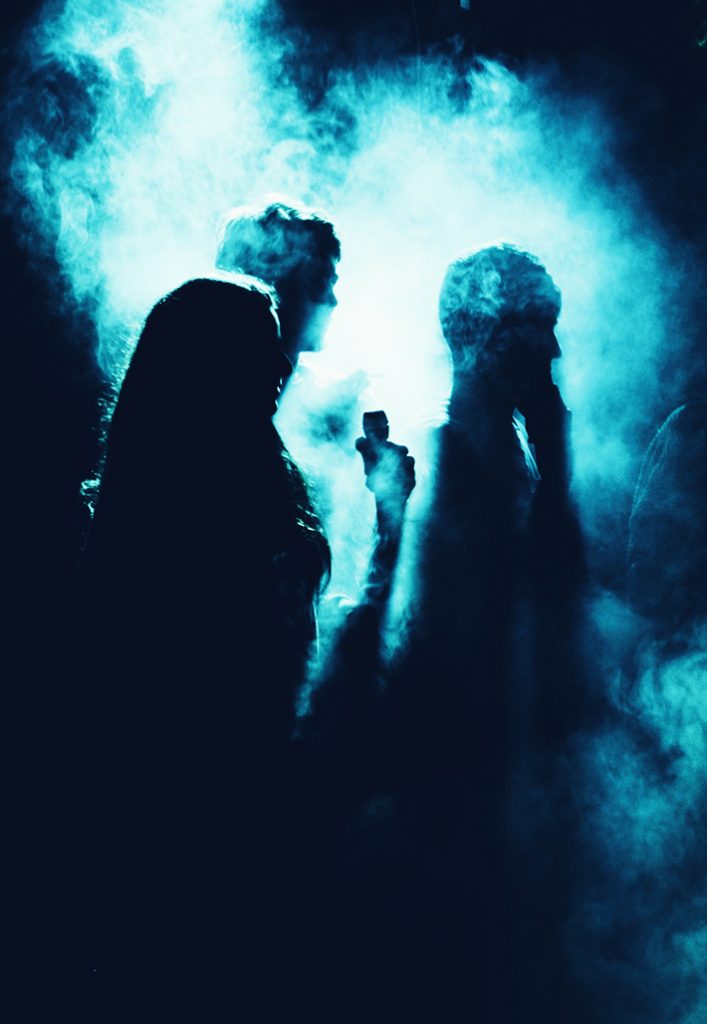 So why do I think that these are amongst the reasons why some people believe that they could and should see a figure on a Ghost Tour?   I have to admit, before coming on my first Haunted Horizons tour several years ago, I did wonder if all that could happen to me!  I really can’t remember if I wanted to see a ghost on my first tour, probably not as I was terrified, but I expected to be scared and run screaming from a building.  I didn’t, under any circumstances, want to be followed home!  So, did any of this happen to me?  Nope!  Was I disappointed?  Honestly, no I wasn’t, I loved every dark, scary, eerie moment.  I had been on several tours and ghost hunts before I could say that I had something possibly paranormal happen.

Since this time, I have travelled the world investigating with my boss and best friend Alison.  So, have I seen a ghost?  Well, yes …. I have.  A couple is in the ‘possible/maybe’ category, but three I can say “I’m sure I did”.  Two shadowy figures, one at Tailem and the other at Z Ward and a full-bodied apparition at the National Railway Museum.

At Tailem Town Pioneer Village we were having a night where many guests had freaked out in the Emporium.  One guest, by the time she got to the church, couldn’t go any further.  I left her with Michael, one of our guides, to fetch her a glass of water from our base camp.   I’d almost reached my destination when there was a figure walking towards me in the dark.  “How can you see a dark figure in the dark?” I hear you ask.  Well, all I can say is that it was darker than the dark.  The height and shape were that of Michael whom I had left just outside the Church with our guest.  Thinking that Michael was having fun with me, I called out ‘Ha-ha Michael, very funny” and turned my torch on the figure …. there was nothing there.  I may have sworn!

At Z Ward Asylum I was setting up to do a live feed/investigation on our HH Facebook page.  Alison was in the Day Room as I walked down the hallway with my arms full of equipment, heading for the Mirror Room to place some equipment in there.  After setting up some equipment on the floor, I moved across to Cell 2.  As I stood in the doorway, I saw an oval shape on the floor by the column in the corner of the room.  My torch was in my pocket and, it was very dark and I didn’t want to fall over anything that was possibly on the floor, so I turned on one of the flashing cat balls to give me some intermittent light.  At this point, the shape in the corner stood up!  I admit I did swear …. Again!

At the National Railway Museum, as a guest, we were in a small investigation group.  The men were in the caboose (no longer accessible) and another lady and I were in the ‘Ladies’ carriage.  We re-joined the men and waited for them to come out of the caboose.  My hubby and son exited the carriage to the left and I saw another person, which I assumed to be the husband of the other guest, go to the right.  She asked where her husband was and I reported to her that he had got off and was walking down the side of the train as I could see his legs.  He then came from a completely different direction!  The figure that I saw had disappeared.  Not only that, the exit to the right was blocked off so no one could have got off that way!  I know what I saw!  I may have sworn (again!).

So how come is it that I have seen figures/ghosts?  This can be easily explained.  I am in our own haunted locations several nights a week for several hours at a time.  And, as I have mentioned before, I travel every year with my BFF Alison (and sometimes Craig) to different parts of the world.  Alison hires known haunted locations for us to investigate.  I am, what you would call, an active investigator.  I’m not one that sits in an armchair and talks about it, I’m out there, in the field.  Because of this, I have a better chance of seeing a figure than anyone that is on a two-hour tour!  I have a better chance than a lot of people, I am very lucky indeed to do what I do.  But does this mean I see a lot of figures whilst out and about …. nope, not at all.  I have never, as yet, seen a figure whilst abroad!  Why?  Probably because I was only in the foreign locations for a few hours at a time and not night after night for years like I am in Adelaide.

Is it possible to see a figure on a two-hour tour?  Yes, it is, as it has been reported numerous times at all of our venues.  It’s a case of being in the right place at the right time.  The luck of the draw.

So, come on our tours and investigations and enjoy the locations, learn their history and hear about the paranormal activity experienced.  Lower your expectations on seeing/feeling or hearing something and enjoy the night.  Once you relax and enjoy yourself, you never know what might happen!

To hear more on this subject, click on the link below and watch GhostCast – our Vodcast on this topic.