Leap Castle, said to be one of the longest continually inhabited Castles in Ireland is located in Coolderry, County Offaly. Some report it to have been built around 1250 CE.  Other reports state it possibly was built in the 15th Century by the O’Bannon Clan, the original name being “Léim Uí Bhanáin” or “Leap of the O’Bannons”.  This name came about from the Legend that two O’Bannon brothers leapt from a rocky outcrop where the castle was to be built. The survivor would get to rule the clan and build the castle. Leap Castle may date back further than this, however, as there is evidence to suggest that there was another ancient stone structure prior and that the area has been occupied since the Iron Age or even earlier.  It is also said to have been used by the druids for ceremonial purposes.

The O’Bannons were a wealthy clan and secondary chieftains to the ruling O’Carroll clan who already had a long history of aggression and bloodshed.  In 1513 there was a recorded attempt by the Earl of Kildare to seize the castle. This attempt failed but another attempt three years later was more successful, but partially demolished the castle in the process.  By 1557 the O’Carrolls regained possession of it and ruled Leap Castle using it as their principal stronghold.

By this time there were already problems starting within the clan. When Mulrooney O’Carroll, the clan chieftain passed away, his two sons, Thaddeus and Teige started a bitter battle for power.  This feud culminated in Teige bursting into the room now known as the ‘bloody chapel’ while his brother (a priest) was giving a sermon to members of their family.  He drove his sword through Thaddeus, his brother and family members watched him die as he lay mortally wounded across the alter.  Teige eventually got his comeuppance as he was later killed by his cousin Cahir (Charles) O’Carroll.

The next owners of Leap Castle were the Darby family who came into possession of the castle through marriage.  Jonathan and Mildred Darby were said to be greatly intrigued by the paranormal and Mildred went on to become a writer of Gothic novels which in turn led to the publicity of the castle ghosts.

Sadly and mainly because the Darby family were English,  Leap Castle became a target for the IRA during Irelands fight for independence in 1922.  The Darby family abandoned Leap to the fate of being bombed and looted.  The IRA even took the domesticated peacocks and hung them from hooks along the top of the tower.

Leap Castle fell into complete ruin and remained empty until in the ’70s when an ancestor of the original O’Bannons, Peter Bartlett purchased it.  Although he did manage to get restoration work done, he passed away shortly after and two years after this Sean Ryan, Leap Castles present owner purchased it. He continues the passionate work of restoring this vital part of Ireland’s history. 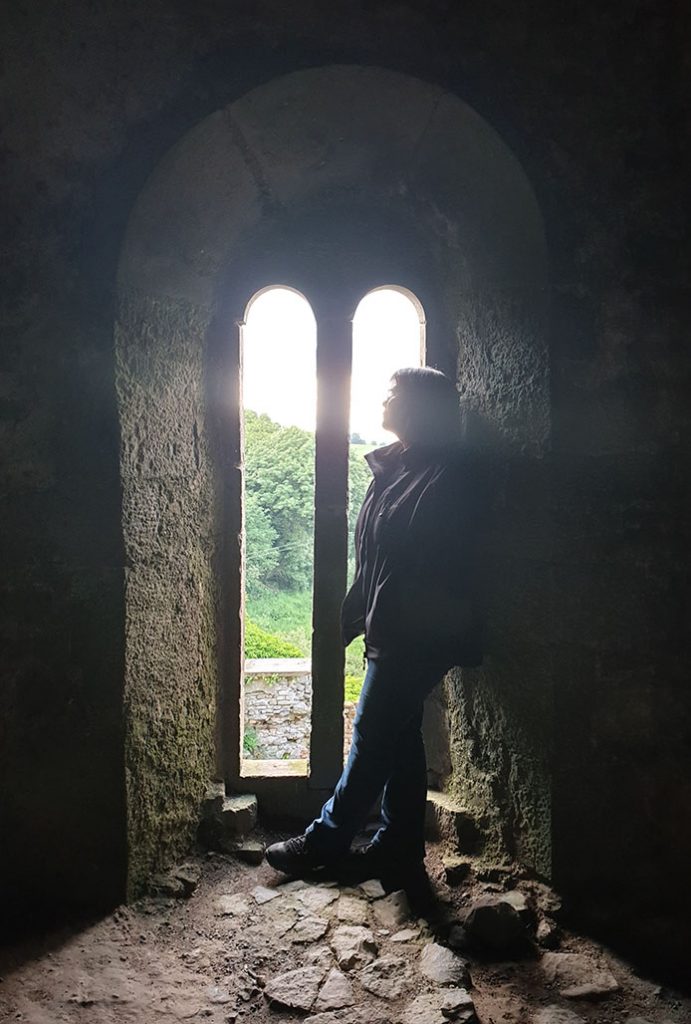 With so much dark history, it is not surprising that ghostly tales were bound to arise.  Many have reported experiencing everything from a child through to the now-famous Elemental.  But why would they be there – why would it be haunted?

The O’Carrolls ruthlessness and murderous ways would probably be a good candidate of course.  The ghost of Thaddeus has been reported to still pace the Bloody Chapel and some of the rooms below.  But Thaddeus wasn’t the only death in the castle.  The McMahon family, for instance, had been invited to a celebratory feast after defeating a mutual enemy clan.  For whatever reason, the O’Carrolls decided to poison their guests, during what should have been a victory celebration.  The same fate happened to some of the O’Neil clan.

In the 1920s an oubliette, hidden behind a wall in the Bloody Chapel, was discovered during renovations. It may show that the O’Carrolls had a hand in many more deaths.  Skeletons impaled on spikes were found lying at the base of the Oubliette… enough human remains were brought out to fill three carts.  However, it was also said that a pocket watch from the mid-1800s was also found there, so it may not have just been the O’Carrolls using that Oubliette!

In the era of the Darby’s, Captain Darby had amassed quite a wealth and legend has it that he hid treasures around the property.  Eventually, the ‘Wild Captain’ was arrested for treason and incarcerated in Dublin.  During his imprisonment, he was driven insane and once released, tried to find his treasures only to have forgotten where he buried them.  His ghost is said to be roaming the castle grounds still looking for his lost treasure.

Continuing with the Darbys, when Jonathan and Mildred Darby took over Leap Castle, They were very intrigued with the legends and tales of their home and enjoyed dabbling in the occult.  They would regularly hold seances, and Mildred went on to become a Gothic novelist which, in turn, no doubt, added to the publicity of the ghosts at Leap Castle.

The most famous of the spirits at Leap Castle is, of course, the ‘Elemental’.  Its appearance is said to have a decomposing face and comes with an equally rotting smell.  Nobody is sure where it originated from, but stories were being told from early on.

Could it have been put there by the druids to protect the land?  Maybe the Earl of Kildare, placed it there to help them take the castle from the inside, after all, rumours stated that he was a man of Magick?   Maybe an O’Carroll remained or could Mildred Darby have summoned an elemental during one of her occult rituals?  These are just a few of the theories behind why there could be an elemental residing in the Castle.

More can be read about the Elemental here, including Mildred Darby’s fascinating letters referring to it.

How excited were we as we pulled into the circular driveway of Leap Castle?  We had heard so much about it, seen it featured on many ghost hunting shows, and now Kag and I had it to ourselves for the night.

As usual, we weren’t expecting too much, after all, we know from experience that activity is not a daily occurrence. If it were it would not be termed ‘paranormal’ but ‘normal’.  Just having the opportunity of sitting in there would be reward enough though and anything else would be a bonus!

After being met by the wonderful Sean Ryan and having sat by the fire chatting with him, we finally set off to explore the tower.  This is all that is available for investigating as the rest of the castle remains in ruins. It is heartening to see that Sean is slowly restoring these other sections and the money from investigations is helping to do this.

After the initial exploration, we settled first in the large dining hall.  Things seemed to kick off almost immediately and got us excited for what the rest of the night might bring. 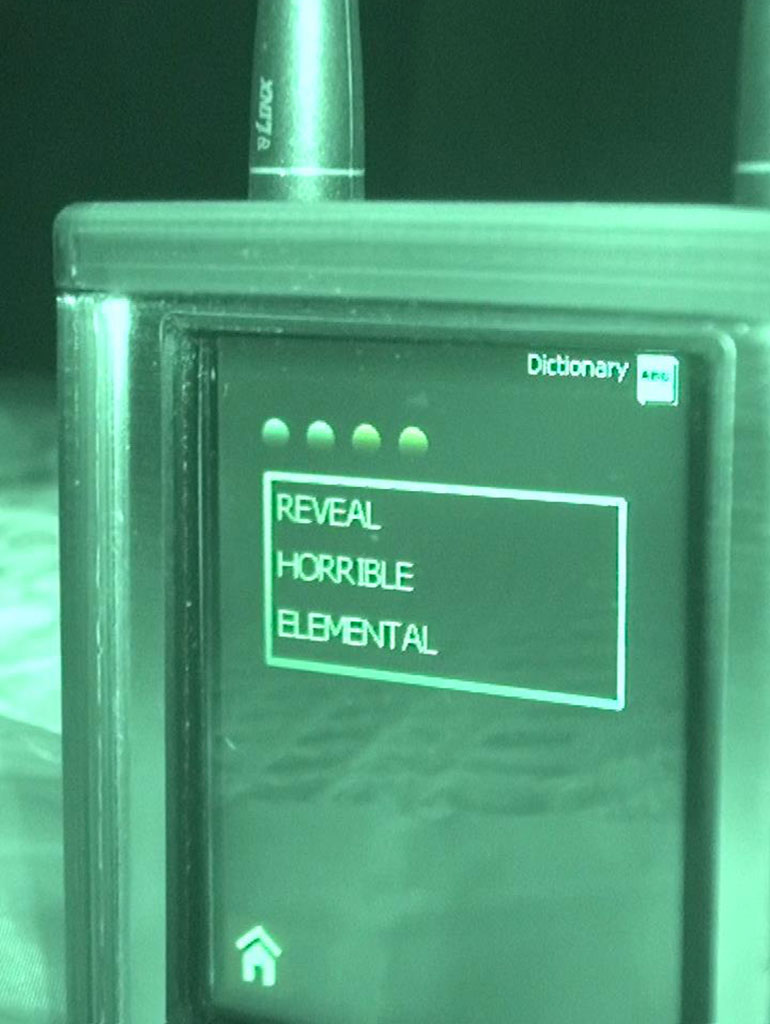 Firstly, upon turning on the Ovilus, the first words to come out included ‘Elemental’.  Strange timing and location for this… coincidence? Maybe, but it certainly got our attention.  This unusual timing was accompanied by Rempods and flashing cat balls that were activating while initially setting up.  On watching the video back, there are two points where we seem to have captured a guttural male voice.  One appears to be mimicking our word ‘ball’ on referencing the cat balls triggering.

Kag startled a little at the sound of footsteps running and was shocked that I hadn’t heard them too.  These were fortunately captured on the video which was running at the time.  At the same time, these footsteps were heard the Ovilus spat out two more words ‘horrible’ and ‘reveal’ so now we had three words showing on the screen ‘Elemental, horrible, reveal’.  Would it reveal itself? Was this going to be our lucky night?  Maybe something was just teasing us!

As we settled around the table and started questioning whatever was there it did not seem to want to talk us, as we captured no further EVP and even the Ghost Box remained quiet without anything of interest.  We did, however, have strange bangs from behind us.  One was loud enough to make me jump and become uneasy!  At the same time, some of the equipment triggered again.  However, with nothing willing to talk to us we decided to move up to the one we were most excited about… the Bloody Chapel!

Our excitement was short-lived as this was the quietest of the areas that we investigated.  The equipment once more triggered while setting up, but once we settled, there was no further triggering of any of the equipment.

We decided to go live to our Patreon Subscribers, and I left Kag to do a lone vigil with them while I sat out on the cold twisting stone staircase outside the room.  Kag may have had a couple of responses from the Ghost Box… one stating ‘leave’ another calling her a ‘bitch’ but apart from that nothing else transpired and we both agreed that it felt very peaceful up there.  I have listened back to the video footage on the camera I had on the staircase with me and there does appear to be very faint whispering, including my name being said.  Unfortunately, it isn’t strong enough to include in the accompanying video to this blog.

We finally did our last location, which was a small room below the Bloody Chapel.  Here we decided to do a headphone experiment.  This is where one investigator wears noise-cancelling headphones plugged into a ghost box while another asks questions that the headphone wearer can’t hear.  The idea is to prevent audio pareidolia.

We certainly had a couple of interesting responses from this, but nothing mind-blowing.

We could have stayed longer, but unfortunately, I was not feeling the best that night, having picked up a virus along our travels.  Reluctantly we had to leave and get some much-needed sleep.

Despite not capturing proof of an Elemental, some of the responses we got were curious, to say the least, and it certainly felt like something was teasing us just enough to keep us interested but not enough to give us anything definite.

Hopefully one day we will return to Leap Castle and be able to spend more time exploring.  Until then we would like to thank Sean Ryan for his amazing hospitality.

Alison has extensively researched the paranormal for over 30 years both in Australia and overseas.  She runs her research team Paranormal Field Investigators and owns Adelaide’s Haunted Horizons.