Alison Oborn is the Spectre Inspector

Alison Oborn is the Spectre Inspector 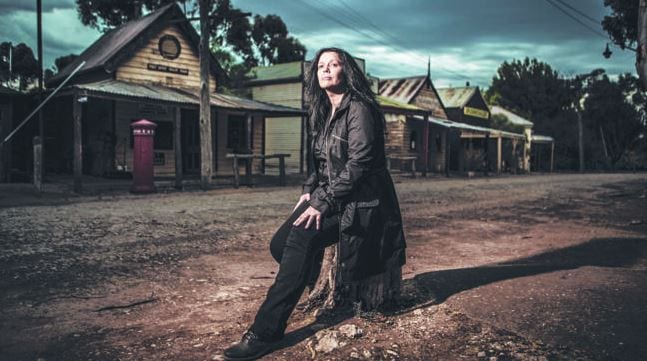 SHADOWY apparitions, disembodied voices and doors that slam of their own accord – these have been staples of campfire stories and scary movies for generations, but for Alison Oborn, they’re all in a night’s work. Oborn has spent a quarter of a century searching for spooks, parlaying that experience into a successful business hosting guided ghost tours in historic South Australian locations.

Oborn didn’t always seek out ghosts. In fact, she slept with the lights on until she was in her twenties to avoid them. “I was born into a haunted house,” she says. “It was an everyday terrace house, but the previous owner got mugged one New Year’s Eve and died of head injuries. My earliest childhood memory was being in the bedroom and hearing heavy, rasping breathing, but nobody else was in there with me.”

Her parents played down her fears, but her anxiety remained. “I lived in a house that scared the pants off me,” she says. “Whenever my sister or I said we’d just experienced something, my parents would make up a rational, natural story, so it wasn’t that my parents were feeding us kids ghost stories.”

When the family moved up the street, she would avoid the old house, going the long way around to visit her friend who lived nearby. “I was that terrified of the house that I couldn’t walk past it, right up to the age of 21, when I went back to England and stood outside it. Even then I felt uneasy.”

As a teenager, Oborn started looking for answers, but it wasn’t until she moved to South Australia in 1989 that she began to seriously delve into the supernatural.

“As a kid, it started out with hanging out in cemeteries, as we all do,” she says. “I just wanted answers, but at the same time, I’m just as fascinated with how the brain works, looking at that aspect of it. I don’t just jump into it and say it’s a ghost. I don’t want to lie to myself.”

Oborn’s curiosity has led to her operating ghost-hunting tours around South Australia, but to get from hobby to business meant spending 10 years in jail.

Oborn and her team, a group known as Paranormal Field Investigators (PFI), started visiting the old Adelaide Gaol in 2002, an experience documented in Oborn’s self-published book, Ghosts of the Past.

PFI had been set up largely as a result of Oborn’s dissatisfaction with working with other paranormal outfits. “At first I didn’t have access to other paranormal groups, so I kind of joined up with some UFO groups first and studied that, but I found that very frustrating,” Oborn says. “With a UFO you get a report of a light in the sky, but what can you do with it, apart from log it? You weren’t there, you didn’t see it. Plus, it’s not likely to happen again. With hauntings, if you’ve got a report of a building having activity in it, chances are at some point down the track you’re going to get it to happen again. You’ve got more chance of studying it.”

Scepticism isn’t what you’d expect from a ghost hunter, but it’s a theme that Oborn returns to regularly, both in conversation and in her book. Her descriptions of events are frequently accompanied by disclaimers and admissions of uncertainty and although she gives examples of her own encounters, she’s hesitant to offer an explanation. “I have a believing side but I also have a very sceptical side,” she says. “I’m never going to say ‘that’s a ghost, ghosts exist’ because I don’t know. I know I’ve got things I can’t explain – we get a lot on the tours – but I just don’t know.”

For all her professed scepticism, it’s clear that Oborn’s believing side is dominant. At one point she expresses doubts about the efficacy of electronic equipment in the search for spectral activity, saying that none of it is proven to work, but PFI’s research methods still include gadgets like audio recorders, electronic thermometers and night-vision cameras. The results from a dozen years of taping, measuring and photographing are slender at best – a prison door swings shut, a spot of light appears to hover in mid-air, an indistinct sound that might be a voice. However, Oborn says there are other phenomena that haven’t been captured on tape. PFI investigators have reported feelings of nausea and dread, shuffling footsteps, banging noises and shadowy apparitions, but Oborn says that most of these could have a natural explanation.

“You’ve got to have a neutral mind and be happy to have natural explanations if you’re going to get to a proper answer,” she says. She points to a recent PFI investigation in a private home. The occupant had reported seeing shadowy figures and feeling agitated and paranoid in one particular room of the house.

“We took our electromagnetic field meters in there. All teams use them but there’s no proof that they actually capture a ghost. What they are very good at is capturing natural EMFs in the walls. There was a massive EMF coming off the wall exactly where her head sits when she’s on the sofa. They’ve found the effect of high EMF can make people feel paranoid, feel that they’re being watched, so sometimes the symptoms of a haunting can come from that.”

While Oborn’s efforts are yet to result in definitive evidence of paranormal activity, they have borne fruit of another kind. She was a volunteer ghost tour guide at Adelaide Gaol and in 2010 she started her own tour business, Adelaide’s Haunted Horizons. “I got a love of tour guiding,” she says of her time at the jail. “How lucky is that, sharing your passion with 20 or 30 people who can’t go anywhere? Towards the end, people kept asking if we did tours anywhere else. There wasn’t anywhere else in Adelaide. We were investigating Old Tailem Town and thought we could do tours there.”

The move paid off. Adelaide Haunted Horizons now offers ghost tours and hunts, dark history and historical crime tours, and paranormal investigation workshops at locations including Peterborough, Gawler and Port Adelaide. Oborn says numbers have doubled in each of their four years of operation, with more than 1300 customers in the last six months. In 2013 she was the first ghost tour operator to be awarded a bronze medal in the South Australian Tourism Awards.

Oborn credits the success of her business to a straightforward approach, eschewing dress-ups, over-acting and special effects. “We try to keep it real in the tours,” she says. “We cover the proper use of equipment, the pitfalls in photography and audio that we mistake to be paranormal – and there are many. After all, I want to know it is happening for real, too.”

Her desire to unearth evidence of ghostly activity is tempered by the long and so far fruitless search. “I’m not optimistic that we will anytime soon uncover the evidence that will change the world,” she says. “People have been trying for over 150 years to prove that ghosts exist and haven’t yet.”

In spite of the odds, Oborn’s enthusiasm is undimmed. A clue to her motivation can be found in her explanation for the popularity of her tours.

“We’re all going to get there one day,” she says of death. “We’d probably all like to be reassured there’s something there after we die.”

Ghosts of the Past by Alison Oborn, published by Paranormal Field Investigators/Alison Oborn, $28 or $20 if purchased on an Adelaide’s Haunted Horizons Tour. Available from adelaidehauntedhorizons.com.au, Also available from the Adelaide Gaol.