Gungellan Hotel – is it Haunted?

GUNGELLAN HOTEL – IS IT HAUNTED?

The Gungellan Hotel, as it is now known, was originally the Railway Hotel and is still registered under this name.  It sits in the country town of Freeling, North of Adelaide.  This small town was founded in 1860 as a stopping place for the Gawler-Kapunda railway.  In 1867, The Railway Hotel was the 2nd pub to be built in the town and has been operating ever since.

It was In 2001, that the Railway Hotel became famous when it was chosen to feature in Channel 9’s successful T.V. series, ‘McLeod’s Daughters’. It was when they moved in to film this very popular show that the Railway Hotel changed to the Gungellan Watering Hole, and NOT Drovers Run, which I called it on our live stream investigation.  What can I say… I never watched McLeod’s Daughters, but still haven’t been able to live that down with the fans!

WHY IS THE GUNGELLAN HOTEL HAUNTED?

There have long been reports of ghostly goings-on in the Gungellan Hotel.  The present owner, Helen Hatch, told of her own personal experiences there, including witnessing a shadowy figure by the jukebox and having things thrown or moved.  The two most memorable incidents for her, were when the pokies started up on their own despite not being used and the day a can of beer rolled from the fridge and ended up at her feet.  It was as if whoever it was wanted her to open it for them.  Helen also went on to tell us that it was believed a Stockman has been experienced at the bar, which is believed to be the spirit of a man who was killed by a train at the nearby station.  I have since found the report of a man who couldn’t pull his horse up quick enough and a passing train hit the horse and cart.  The man was taken to the Gungellan Hotel, where he passed away a short time later.  The ‘stockman’ may also relate to another death when a customer died suddenly at the back of the hotel from a massive heart attack back in the 1800s.

We found out later, that the Gungellan Hotel dining area sits in an area that was once used as a doctors surgery.

Interestingly, none of these historical characters, except possibly one came through to confirm they were still there.  Instead, we were taken by surprise by what was to become one of the most uplifting investigations we have ever done.

We were invited to go and investigate the Gungellan Hotel by one of our Patreon subscribers, and our friend Ash McInnes, who had kindly arranged this with the owner of the Gungellan Hotel. This was to be our very first ‘Haunted Horizons on the Road’.  This is a project designed to showcase other haunted tourism businesses by live streaming paranormal investigations from them, in an attempt to help at a time where tourism is struggling. For this reason, we were extremely excited.

After having our meal there (highly recommended) and doing a quick look around, we settled in for the investigation.  As always we enter these places with no preconceived ideas or knowledge of the location.  We are told a rough history and a few experiences, but we try not to know too much information so it can be verified or not by people with the knowledge.  On this occasion, all we knew was a short history of the pub, the fact that this pub WASN’T called Drovers Run, and that tragically a couple of the Hotel’s regulars had passed away.  However, we were convinced that if we were to get anything, it would be to do with the ‘Stockman’ seen at the bar… historical links.  It wasn’t far into the investigation before we realised this was not going to be, it was about to travel in a direction and totally out of our control. 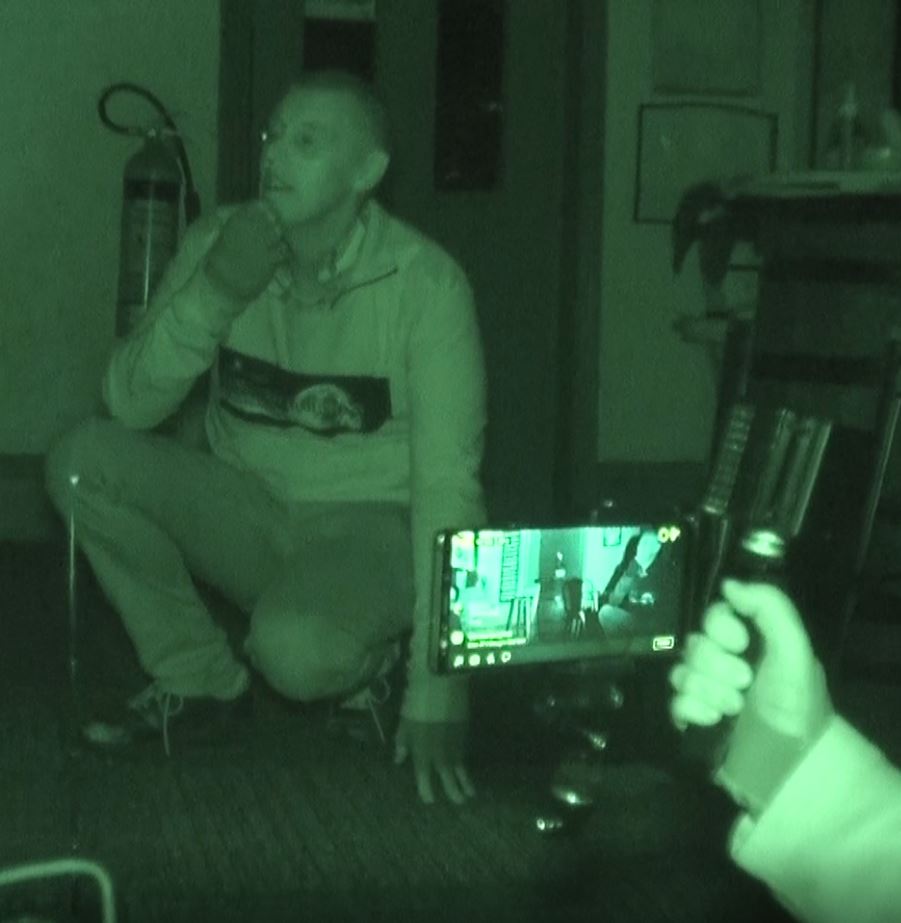 It started early in the evening as we finished setting up.  Suddenly the familiar music of a pokie machine playing echoed through the hotel.  Rushing over to the small pokie room, consisting of approx 5 machines, we found it still shut off.  As we ran past Helen who was still sitting on the floor, warming herself next to the open fire, she casually called out to us “That’s Macka”. We checked the machines but they were either switched off or had no credits except one.  When we punched the buttons, none of them moved or rang out and we were told the machines hadn’t been played in quite some time… except seemingly by ghostly hands every now and again.  Macka, one of the regulars who passed away, had a favourite machine and this still played when nobody was there.  Was he still doing this to let Helen know he was still around?

an E.V.P. session (voices on recordings you don’t hear at the time until played back) did not reveal too much except for the clear sound of glass chinking, similar to the sound two glasses would make when toasting.  None of us had a drink with us, especially in a glass.

We then brought out the Poltercom which is just another form of the spirit box but with an intelligently controlled motorised sweep.  We have never had great results from this, so rarely carry it with us.  This night was going to cause us to question these original thoughts.

At first, it appeared that a child was coming through as several times we heard “mummy’ clearly come through the static.  Upon asking the age, it came out with Eight.  We asked Helen if she had any knowledge of a young child dying in the Gungellan Hotel.  She shook her head and said she hadn’t.  After the investigation Ash did some more digging in the history and found that indeed a child had died in the area we were sitting.  An eight-year-old girl had been brought to the doctor and her parents were on their way back from Gawler with medication.  Sadly they did not reach their child in time, and by the time they arrived, she had already tragically passed away.  Is the child still there and looking for her mother?  We were never able to get to the bottom of this one, as communication rapidly changed direction.

The voices coming out of the Poltercom changed, and suddenly a deep man’s voice started to speak.  The name “Ian” came out several times.  It meant nothing to us and we ignored this at first until Helen spoke up and informed us that Ian was Macka’s real name.  It wasn’t long before his nickname ‘Macka’ came out too.  Helen showed us the drawing of Macka on the wall and told us how he had been an extra in McLeod’s Daughters throughout the series, so he was a big part of the Gungellan Hotel.  They even have a section of the wall as a tribute to him.

The second live stream session was for our subscribers and for this we moved to the bar.  For this session, we did an Estes experiment.  The argument against using a spirit/ghost box is that we know the questions being asked so are automatically biased to what we are hearing and expecting.  For this experiment, we put an investigator on headphones to call out what they are hearing without being able to hear those questions.  This takes away any bias to what the caller is hearing.

We put Craig on the headphones and started asking questions.  As we did, something was thrown behind the bar.  On checking, Helen found the only thing out of place was a crumpled up menu lying on the floor which had not been there previously.  Interestingly, Craig only called out three words at the time “Ian”, “Ian”, and “rubbish”.  Interesting as he had not been aware of what had been thrown behind him.

The experiment went on to reveal a lot more relevant responses to the questions asked.  The highlights of this investigation can be found on the video linked at the beginning of this blog, so don’t forget to give it a watch.  Remember though, the footage is taken from a live stream investigation, so obviously not broadcast quality but intriguing nonetheless.  From the responses we got, whoever is there is happy to be there.

It is never comfortable when you get a response related to a recent tragedy.  This is always the problem with doing investigations live to the public, as we are all in the moment, with no control over what direction it will take if any.  Once it did go in this unexpected direction, we were obviously concerned that direct family members may have been watching and the last thing we wanted was to cause them any distress.  Family members were watching, they have now contacted us.  They were happy that Macka made contact and we have now handed over the complete audio of that session.  Helen also benefited, as she was afraid of what was there, never understanding the strange events that were happening.  She now is a lot more at peace and chats to them constantly, as if they are still with her.

Maybe, just maybe things go in a certain direction for a reason.  Either way, it seemed to bring comfort to all around and we managed to showcase what has become one of our favourite haunted tourism locations. 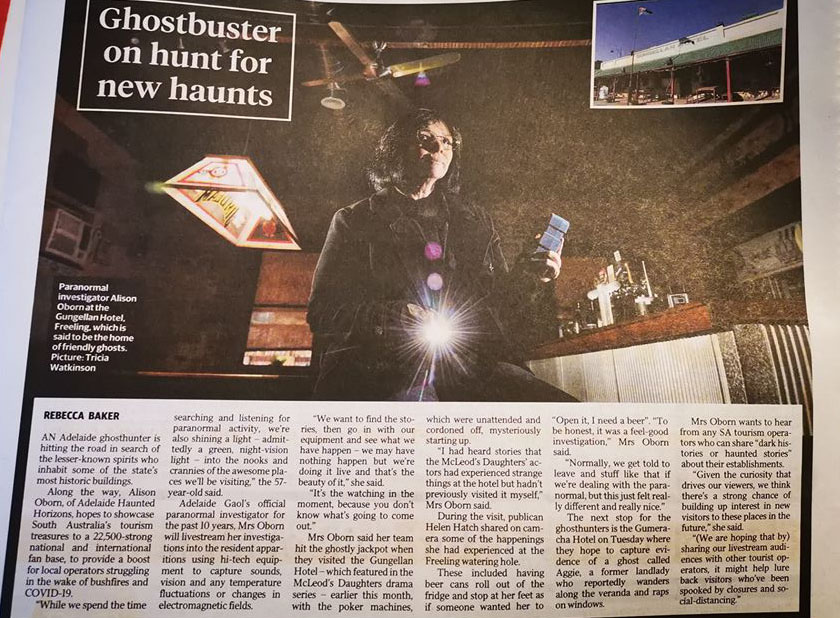 A little addition to this story.  The media wanted to do a story with us and the Gungellan Hotel, to cover this new tourism project.  No sooner did I walk in the door, the pokies went off.  Strange as they hadn’t gone off since our investigation and had also been serviced since my last visit.  It was almost as somebody was giving recognition as I walked in.  The photographer also became edgy, as she began to have problems with her equipment and camera.  She confessed that this had never happened before.