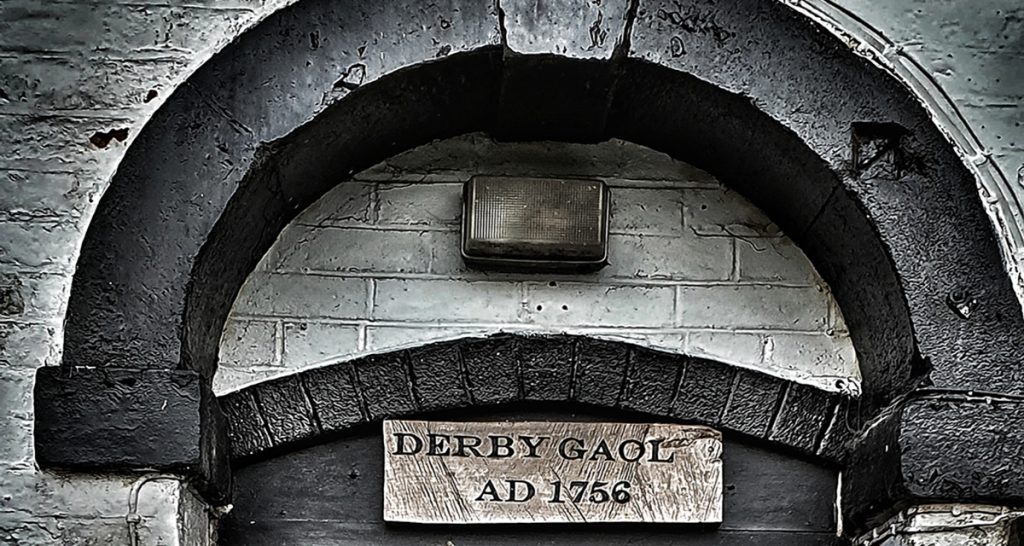 Old Derby Gaol Ghosts have been talked about for many years and we finally got our chance to explore these stories ourselves.  Old Derby Gaol sits in the heart of the town of Derby, Derbyshire in the U.K.  Originally anybody committing a crime in Derbyshire was taken to Nottingham Castle, however, it was seen that another more local gaol was needed and in 1652 the Cornmarket Gaol was built.  Derby Gaol can actually refer to three different gaols.  This first one did not last the tests of time and was eventually demolished to make way for the Gaol we are going to focus on today, the Old Derby Gaol in Friar Gate.  The third, Vernon Gate Prison, will be visited in another blog article.

Old Derby Gaol was built in 1756 and included stone from the original gaol and in an area named Nun’s Green.  This had been the traditional spot for previous executions, where prisoners were hanged, often from any available tree.  In England, at the time the Old Derby Gaol was in operation, the system of the ‘Bloody Code’ was in existence.  This Act began in the late 17th century and dictated that you could be executed for offences other than murder, unlike Adelaide Gaol where this was the only crime that would result in hanging.  Starting with only around 50 offences, by 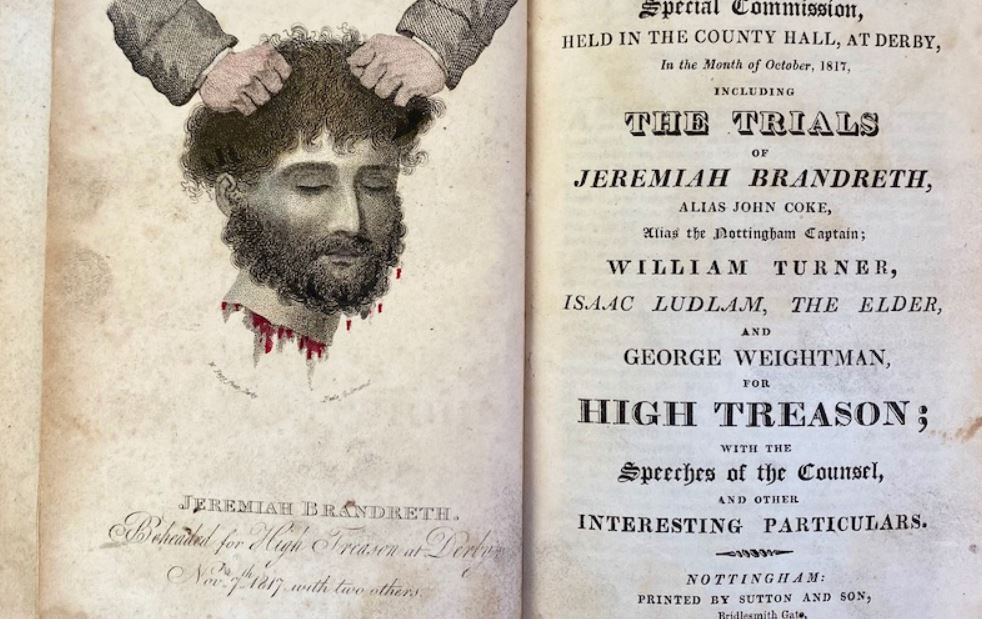 1756, when the Gaol was in operation, new offences had been added until there were over 200 that would see you executed, should you commit these crimes.  Some were very trivial such as wrecking a fishpond, impersonating a Chelsea Pensioner and writing a threatening letter, others were more serious such as murder and treason (the latter which would see you hung, drawn and quartered).

There were over 60 executions at Nun’s Green from 1735 and  1825, 18 of them were directly outside the Derby Gaol on newly erected gallows.  The first of these public hangings was on the 10th April 1812 when 27-year-old James Tomlinson and 26-year-old Percival  Cook for housebreaking.  The most famous executions took place in Nov 1817 when the three “Pentrich Martyrs” were hanged and beheaded (they were saved from the disembowelling and quartering).  These were to be the last people in England to be beheaded by an axe.  Could the Derby Gaol ghosts be one of these executed prisoners?

As well as executions, Old Derby Gaol saw many other deaths, with some from disease and overcrowding.  Often there were up to 70 people crammed into the seven cells where sanitary conditions and ventilation was appalling.  Conditions were improved in 1774 after much criticism but, overcrowded conditions continued as did sickness.  In 1817 the gaol was looked at again and condemned for its conditions and the Corporation of Derby drew up plans for a new County Gaol and the new Vernon Gate Prison was opened in 1827, replacing the Friar Gate Gaol.

Old Derby Gaol now sits under a multi-storey building and, was purchased by historian Richard Felix, who is better known for his time with the T.V. show ‘Most Haunted’.  He has now preserved the area and, made it into a museum.  It was Most Haunted that first brought the Old Derby Gaol Ghosts to light with an early episode.  Since then, Richard Felix has allowed Ghost Hunting events there, which helps go towards the museum’s preservation.

Our host for the night, Denise, filled us in on some of the happenings there, including people seeing dark shadows moving around in the hallway, smells and noises.  She explained that the people who were witnessing these also reported that their experience came with strong emotions.  The debtor’s cell is particularly active with a spirit they believe is called George who apparently makes himself known, especially to female guests.  The other active cell is the condemned cell and this is where the team from Most Haunted filmed a Cross that they had out as a trigger object, moving.

Richard Felix, even had his own experience when he clearly saw a figure moving down the hallway.  Thinking somebody had come in, he went to check only to find nobody there. 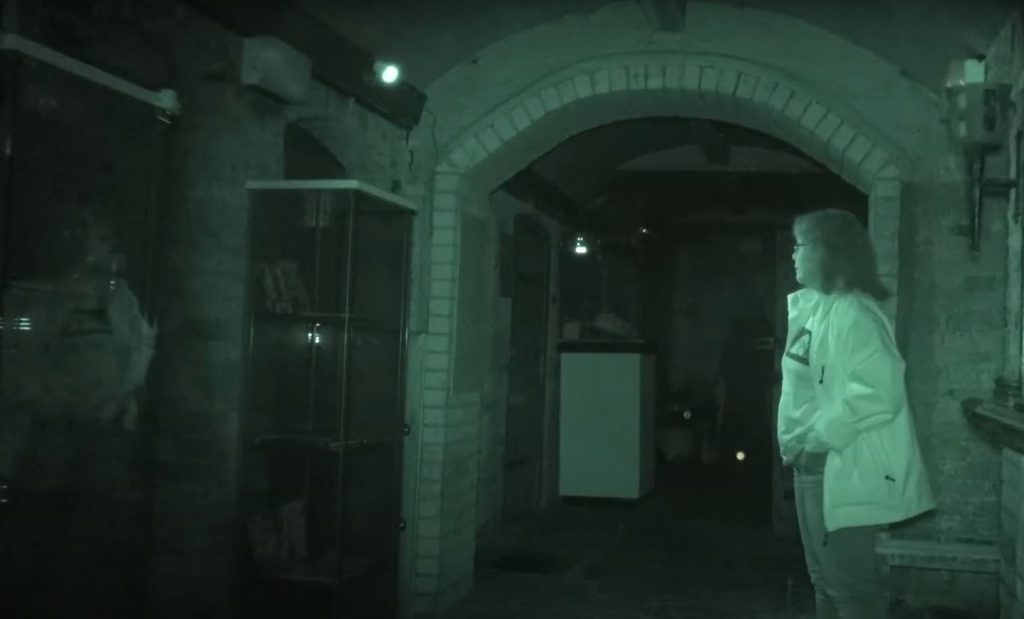 With our initial walk around over, Kag and I began to prepare for our paranormal investigation in the hope of finding evidence of the Old Derby Gaol ghosts.  The night started, almost immediately, with strange things happening.  Firstly my phone had issues and then my voice recorder switched itself on to playback when nobody was near it.  We thought at this point we were in for a good night!

The first part of the investigation in the hallway revealed nothing at all.  We tried EVP but on playback had no strange voices at all, apart from ours.  Next, I decided to do a lone vigil in the debtor’s cell with George.  I didn’t seem to be George’s type, however, and the vigil remained quiet, apart from a few interesting bangs.  I swapped spots with Kag, to see if she was more George’s type but again, apart from some curious responses from the ghost box, it remained quiet.

Next, we went into the Day Room, which is where they made things so they could make some money, as they had to pay for their own keep.  It was here we decided to do the Estes experiment (Ghost Box with headphones).  We were told that there had been a murder in this room and we hoped to find out more.  There were possibly a few interesting answers to the questions, alluding to a young girl who may have died there when it was a house after the Gaol closed.  She was said to be a chambermaid who hanged herself in the area we were in due to being ‘disgraced’ and becoming pregnant.

All in all, the night, although highly enjoyable, was extremely quiet when it came to any paranormal activity.  Does this mean the Old Derby Gaol ghosts don’t exist and isn’t haunted?  Not at all.  For those that investigate and spend a lot of time in these haunted locations, we know that some nights can be very quiet and some not so much.  This is the way of the paranormal.  If it was happening every day it would be termed normal instead of natural instead of supernatural.

©Adelaide Haunted Horizons 2021
Not to be reproduced without permission