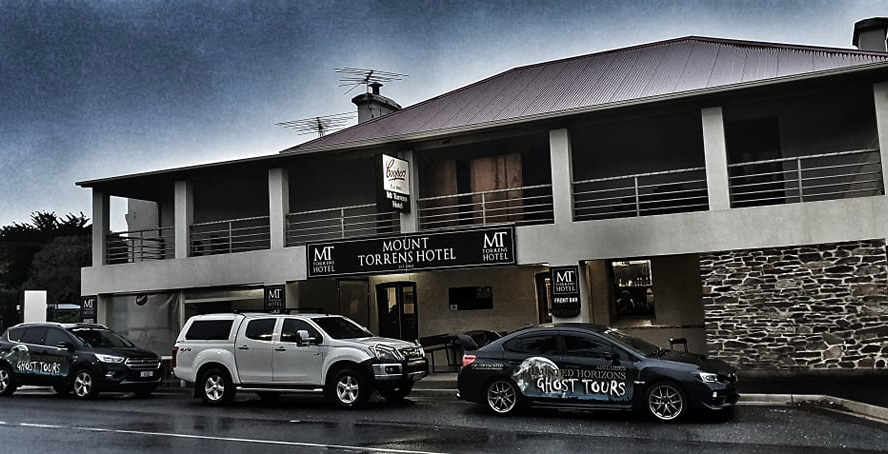 The Mount Torrens Hotel ghost has been talked about for many years so we went in to explore the stories and the history of this wonderful old hotel. The town of Mount Torrens is approximately a 50min drive from Adelaide and was originally known as Barton Springs after Geroge Dunn and his wife Mary purchased land there in 1840.  When copper was found close by in 1847, George Dunn’s property was often used as a stopping point for the bullock drivers so he decided to open a hotel which was called the Cornish Arms Hotel.  Meanwhile, he was also building a second pub, the more impressive two-storey Mount Torrens Hotel which opened in 1850 (there is a discrepancy as to whether it was 1862).  However, by this time the mine had closed and the miners had moved on to try their luck on the Victorian goldfields.  George Dunn was patient and when the miners started to return he subdivided his land to create the new town and even donated land for a new Anglican Church to be built.  The town prospered, especially when the copper and gold mines re-opened for a short while but by the 1920’s it had largely become a forgotten town.  The town, however, has kept its charm and the original buildings from the 1800s still remain and add to the beauty and history of the town. 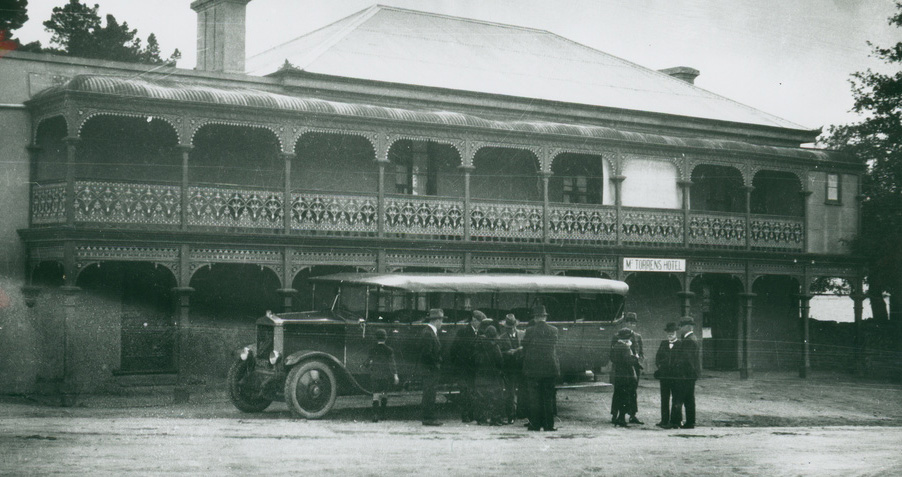 We were kindly invited by Angela Lo-Faro who is the present owner of the Mount Torrens Hotel because she was convinced she had some strange goings-on there.  It turned out she is very fond of the Mount Torrens Hotel ghost and feels that it is a strong male presence, although a weaker female comes through from time to time.  She also believes that the male presence is George Dunn as she witnessed him one night recognised him from an old photograph.  Angie and her husband have been renovating and bringing the Hotel back to how it would have looked around 1862 and said that as she was peeling the paint off she felt the presence was agitated.  As the renovation work continued, the presence seemed to settle as if whoever it was finally approved of what they were doing.

Angie also recollects a day when a local family wanted to look upstairs as they were curious about what it was like up there.  While they were chatting in the lounge room upstairs, all three females started to feel a very strong male presence and the child with them became agitated and desperately wanted to leave.  They reassured her that it was fine and that George wouldn’t hurt them.

Angie also believes the spirit of George Dunn remains due to his sad end.  His wife Mary filed for divorce in 1860 which was unheard of back then and when she passed away 15 years later, she left papers indicating that George had been unfaithful and had fallen in love with his housekeeper.  This was possibly backed up when he died not long after, as he left his entire estate in trust for Clara Gibbett’s daughter who was also known as Clara.  Was this his real daughter from his love affair?  Another strange indication is that both George and Mary are buried in the Mount Torrens Anglican Church cemetery. Mary is buried at the front while George is behind in an unmarked grave.  Could it be because of this that the ‘Father of Mount Torrens’ and the possible Mount Torrens Hotel Ghost is still unsettled?

We decided to set up first of all in the Lounge upstairs.  This room had also been used for meetings of The Independent Order of the Oddfellow and Foresters and still has the face hole in the door where they would be identified before entering.  Interestingly this is where the equipment kicked off.  We had a Paranormal Music Box, which has a beam that if broken causes it to play music.  We placed this at the door under the face hole, and it triggered almost to our questions.  Thinking it was a glitch, I asked it to move away from the music box and it fell silent once more.

We went on to do audio experiments such as E.V.P. bursts (Electronic Voice Phenomena – voice on recordings not heard at the time) but with no success, we moved to the Estes Experiment (Ghost Box with headphones).  The one thing that was apparent from the responses was that Shane Potter, who was kind enough to arrange the investigation, was asked to leave not just the room, but the pub. As it was freezing cold, he wasn’t about to comply with that request but did go downstairs to leave us ladies alone.  Once Shane left, we seemed to have more responses from both the portal and the Estes.  It would appear from the responses that George approved of Angie and the work she was doing there.

Moving downstairs we joined back up with Shane in the bar.  We started with the usual E.V.P. but only captured a possible faint one.  With the Estes, once more Shane was asked to leave to which he refused.  We thought we would take him away to another area with Kag and me and leave Angie to converse on her own.  She sat at a table on her own with the ghost box/portal and asked questions.  There were a couple of curious responses which can be seen in the video below. A couple of times, Bishop came out of it clearly.  Angie did wonder if this referred to the fact that the Bishop resides over the Anglican Church, and George may still be unhappy despite helping the Anglican Church by donating the land it stands upon, he was still put into an unmarked grave.

With this, the investigation came to a close.  We had no real answers, just indications that maybe Angie was correct in who she thought was still residing there and that he appeared happy with the renovations.  There is nothing bad in this pub, and if the Mount Torrens Hotel Ghost is George, he appears to be watchful but friendly.

If you were looking for a lovely drive out, definitely visit Mount Torrens and stop in the hotel for a meal.  The food is definitely amazing. The above photo was our dinner and it tasted as good as it looked.  As mentioned before, the reason for our visits with ‘On the Road Live’ is to highlight tourism/hospitality locations in our own quirky way.  Tourism is struggling with COVID-19 so needs all the support you can give!

We would like to thank Angie and her husband for allowing us to visit their beautiful hotel and Shane for arranging this for us.

For more articles like this visit Our Paranormal Blog