Heritage and Nautical Museum Ghosts – What is the History and is it Haunted?

The Heritage & Nautical Museum Ghosts, do they exist and if so why would the Museum be haunted?  Kag Allwood and myself were invited for the evening to see if we could capture any sort of paranormal activity.  This was quickly added to our list of sites in haunted Wallaroo, that were on our radar to be investigated.

Wallaroo is a coastal town, around a 2hr drive (160 km) from Adelaide.  Although now a beautiful tourist and fishing town, it was originally very industrial with copper mines and smelters to handle the copper ore from the mines.  First settled in 1851 it soon grew in its heyday to a population of around 8,000 people and became the 2nd biggest port in South Australia next to Port Adelaide.  In 1923 the price of copper fell, and the smelters were forced to close their doors, leading to a dwindling population.  Nowadays, the population of Wallaroo sits at around 4,000 people.  It is a popular place to visit for both fishermen and tourists.  These days Wallaroo is better known for its prawn and crab fishing, especially the popular Blue Swimmer Crab.

In the main part of Wallaroo sits the Heritage and Nautical Museum, our investigation location for the night.  It was originally built as a post office in 1865 and operated until 1910 until the Post Office was moved elsewhere, and the police department took over.  After this, it became the Police Inspectors’ residence, before finally being handed over to become a museum in 1975.  The Heritage and Nautical Museum tells the story of Wallaroo, including the maritime, copper smelting, general town history and of course the history of the building itself.  The collections are laid out in four buildings and have some fascinating items to peruse through, including a giant squid that was found in the stomach of a whale.

The wonderful Sandy Hilbert, one of our Patreon Subscribers, invited us to Moonta/Wallaroo to investigate some of the sites she had heard to be haunted.  As always, when somebody finds us a location, we invite them to join us for the night.  We have investigated with Sandy before and she runs her own little paranormal team in Moonta.

As we arrived, we were met by Colin who has been a volunteer at the Heritage and Nautical Museum for 47 years.  He is a wealth of knowledge, and we thoroughly enjoyed our tour around.  He told us he even ran ghost tours of Wallaroo for a while before COVID hit.  On asking him about the ghosts at the museum, he was totally honest and said they were unsure if it was haunted or not.  The best he could give us was that some of the volunteers were hearing unusual sounds in the building, including footsteps walking up and down the hallway.  Colin told us that they were heavy footsteps, so definitely an adult.  He added that there had been no sightings of ghosts in the building, that he was aware of.

Although the Post Masters and Police Inspectors used the building for their family accommodation, to date I can find no record of a death occurring in the building itself.  However, we will keep searching and add to this blog should we find any evidence of this.

Would the Heritage and Nautical Museum ghosts turn out to be a simple case of residual haunting rather than an intelligent ghost/spirit?  Two thoughts for what residual could be are 1) that it is just the building replaying sounds like a recording.  For instance, people have walked up and down the corridor so many times in history that for some reason the sound is captured and replayed. 2) Time is not linear, but the past is still happening around us, and maybe sometimes we get a glimpse, or a sound leaking through to our timeline.  Are either a viable hypothesis?  I will let you decide. 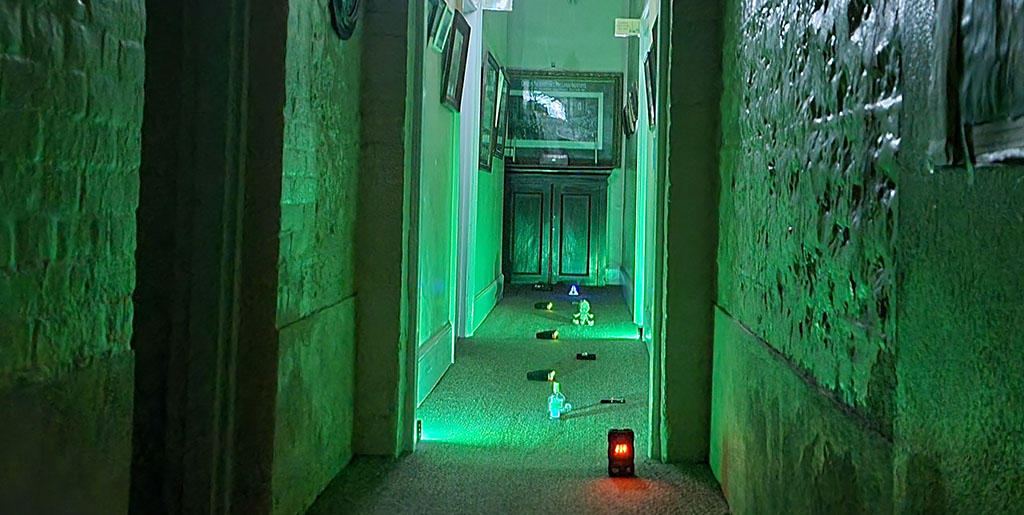 Our Paranormal Investigation at the Museum

Kag Allwood and I decided we would use the Heritage and Nautical Museum for one of our ‘On the Road Live’ locations.  This is where we set up a paranormal investigation and stream it live for free to our followers on our Haunted Horizons Facebook page.  We decided to investigate the main building first and set ourselves up in the hallway.  After all, I don’t believe if ghosts exist that they are stuck in a room.  As we started our Livestream, I explained what we were going to do, and as I did I kept turning to Sandy who I thought was in the room to my side.  It was a few seconds before I realised, Sandy was standing with Kag in the Hallway.  I took a second look into the room but there was nobody there.  I did have a torch blinding me a little at the time, so maybe it was a trick of the eye?

As we introduced ourselves to whoever could be there, we asked if they could perhaps light up any of our equipment to let us know of their presence, but no equipment triggered.  We tried an E.V.P. (Electronic Voice Phenomena) session with not much luck either.  We may have captured a small whisper, but nothing conclusive. We then tried the Portal/Ghost Box and again got very little although, when asking for a surname it said, ‘Sam’.  At first, I thought that was only a first name, but on checking ‘Sam’ is also used as a surname.  When asked if they lived here, a male voice answered ‘Of course’. This was all that we got out of the session, and could well have just been radio.

We went to the Estes method (Ghost Box with headphones), and it came out with a couple of small words but the clearest was a strong male voice that said “Enough”.  At the point it said this, the words stopped and a strong interference kicked in, which was unbearable to listen to.

With nothing definitive happening in the house, we moved to the large back shed.

We again didn’t get much from another E.V.P. session, so we gave Kag the headphones for an Estes session.  While we were questioning Kag, the flashing cat ball on the bottle of rum (trigger object… not for us to drink!), triggered.  This was the only bit of equipment to trigger all night.  We asked if they used to drink and as I was about to ask what it was they liked, Kag came out with “Port”.  This isn’t the first time we have had answers quicker than we could ask the questions.  The ball continued to flash in response to our questions.  The most interesting moment was when Kag heard “Oh, g’day love” and then when the ball flashed once more, she heard a very stern “Leave it!”.  Interestingly the ball did not flash again after this.  Could a second spirit have come in, was recognised by the first, and then the second told whoever it was to stop interacting?  It certainly went a little quieter after this.

Soon it was time to pack up.  This was definitely one of our quieter investigations to date, but this is the way of it.  We could well have just been there on a low activity night or maybe it is more residual that the volunteers are experiencing.  The last session with the ball was very curious though and seemed to be more intelligent.  As we all know, the paranormal doesn’t happen every day or it would be called normal.

Either way, whether the Heritage and Nautical Museum ghosts exist or not, it is certainly a unique and wonderful place to visit.  At the time of typing, it is only $6 to get in and is open 7 days a week from 10 p.m – 4 p.m.  There is so much to see there, so factor this in when visiting.  I am sure if Colin is there he would be more than happy to answer your questions, as he is very passionate about the museum.

Thank you to Sandy for organising this, and to Colin and the volunteers at the Heritage and Nautical Museum for allowing us to come and explore their incredible museum.  We will certainly be back ourselves to see it fully next time.

For more Articles visit our Paranormal Blog
To see other places we have investigated visit Australian and Overseas Investigations
To learn more about our tours Adelaide Haunted Horizons
To subscribe for extra live stream investigations www.patreon.com/hauntedhorizons