The Grand Hotel ghosts have been spoken about for many years both at the bar and in many news stories so we were naturally excited to be invited to check it out.  We would like to thank Leandra Worrall for allowing Kag Allwood and me this opportunity to investigate these stories for ourselves.

Millicent is a small South Australian town approximately 398 km from Adelaide. It was founded in 1870 and named after the daughter of the first Anglican Bishop of Adelaide.

In the main street sits the Grand Hotel, which was officially opened in 1900 despite opposition to there being a 3rd hotel in the town.  The locals felt that there were already two establishments in town, which were more than enough.  Petitions and court cases ensued, but it was eventually agreed to because of the railway station close by.  The other hotels at the time were not of high-class accommodation, so the Grand Hotel was built on an agreement that they would supply this type of accommodation, hence the name “Grand Hotel”.  For a long time, it was well known as being the grandest hotel in the SouthEast. 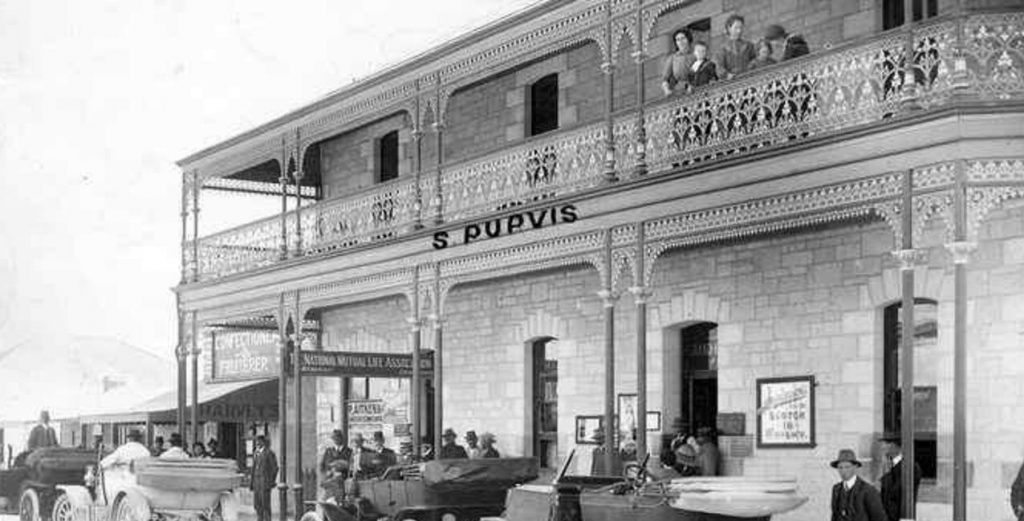 There have been a lot of stories circulating for many years about the Grand Hotel ghosts, with rumours of there being up to 10 different energies in the building.  The best known are the ghosts of a little girl and boy, a lady they call ‘Mary’ and an older gentleman who is said to be rather grumpy and resides in Room 7.  They told us how they gave the lady the name Mary.

When searching for deaths at the Grand Hotel, I did find the death of a lady.  Her name was Mary Purvis, 34 years old, who was the wife of the publican of the Grand in 1914, Samuel Purvis.  She had given birth several weeks earlier, but complications had set in.  She was removed to Adelaide to be operated on but passed away on Jan 2nd 1914.  They brought her body back to where it belonged and was buried three days later.  Could this account for the ghost they have knowingly called Mary?

I also found the death of an older gentleman, in December 1946.  Mr Adolph Spehr and his wife had decided to leave their property in Noramoo, and live instead in the Grand Hotel.  He was 69 years old and his health had deteriorated, so they left their son to manage the property, and for the last 2-3 years of his life, they lived an easier life at the Hotel.  It was while he was enjoying his midday meal there, that he collapsed, and within 15 mins passed away.  It would have been interesting to have found evidence on which room they resided in.

As for the little girl and boy, to date, we have found no deaths of a child in the Hotel.

Leandra told of how one evening, a customer went to the toilet only to come out to find a little girl sitting on the stairs in what looked like a white frock. At the time the owners were living there and had young daughters, so she told the customer that it was O.K. and that it was probably just one of the daughters.  However, on mentioning this to the owners later she was told that the family had been out all day and had only just got home.  Leandra was relating this puzzling incident to another girl who worked there, who responded with how she too had seen a little girl sitting on the stairs, dressed in a similar white frock.

We were also told of another regular customer who got up to leave and said goodbye to Leandra, but before he made it to the door he swiftly turned around and asked Leandra who had touched him on the shoulder after he had turned around to find nobody near him. He was adamant that he had felt somebody touching him.  Sophie who works at the hotel has also felt somebody touching her and she told us of the time that she had the sensation of fingers wrapping around her leg.

Sophie also told us of their Chef who had to leave the kitchen one day, because she turned around to find a little boy standing right next to her when no children were present in the Hotel.

After chatting to the lovely people who worked at this reputedly haunted hotel, it was time to search for the Grand Hotel ghosts!

Soon it was time to start our investigation, looking for the Grand Hotel ghosts.  Joined by Leandra and Sophie, we started in the bar downstairs and laid equipment out along the hallway leading to the front door, and then also up the staircase behind us.  With no luck on our E.V.P. burst (voices on recordings not heard at the time), we then tried to run the ghost box through the portal.  After a couple of words “Alice” and “Dead” came out of it, we decided to play a card game, thinking that a child would like this.  I gave Leandra and Sophie a card and then drew one for myself.  The idea was that we would hold up our card one at a time and see if whoever was there could give us the number through the portal.  It got the number of the first card (4) and second card (7) correct but seemed to tire of this game and all went quiet.  While this was happening the E.D.I (a device with multiple sensors in it) triggered showing temperature and air pressure had changed.

At this point Leandra and Sophie needed to leave, so Kag and I moved upstairs to investigate the hallway.  After sitting and playing ball games with any child that may be there, and with minimum results, I threw the ball down the hallway before donning the headphones for an Estes (Ghost Box with headphones).  On Kag asking if anybody there could throw the ball back, out of the headphones was heard “I will think about it”.  When asked what their name was, almost immediately the name “Lisa” came out.  Again though, we couldn’t find anybody by this name having passed away in the Hotel.  At this point, I started to feel like somebody was touching my hair and the word ‘Touch’ came out.  What I didn’t know is that Kag had apparently just asked if the child could come up and touch me on the head.  The number 8 came out shortly after, which we had out of the portal a number of times downstairs.  Having a thought, I removed the headphones to ask Kag where room 8 was, and whether she thought it was referring to a room number.  Kag looked around before realising she was standing right next to Room 8.  We asked if we should go to room 8, and again something started playing with my hair.

We quickly moved to Room 8 and, as we were setting up, we appeared to get a whispered voice on the recording saying my name “Alison”.  We put the portal back on but at the same time, we also put me on the Estes.  When asking how many of us were in the room the portal quickly came out with the correct number of “two” before answering the next question with a “F… You!”.  It was then that I got a cold breeze on my face.  Coincidentally, Kag was about to ask out “Can you tickle her nose?” which one of our subscribers had posted.  My name came out a couple more times before we moved back into the hallway.

This time we got absolutely nothing in the hallway on the equipment or through the headset.  One strange thing did occur though, and that was that after I felt the cold on my face in room 8, I had started to shiver uncontrollably and couldn’t get warm.  We were discussing calling it a night as I was tired and cold when Kag felt my hands.  She was surprised at how cold they felt, as it really wasn’t that cold in the Hotel.  The strangest thing was, as she touched me, the cold disappeared and I felt normal again.

Now that it had all fallen silent, we decided to call it a night.

We would like to thank Leandra for allowing us this opportunity to explore this wonderful Hotel, Sophie for originally contacting us and also the Grand Hotel ghosts for being so accommodating!

Do visit the Grand Hotel yourselves if heading down that way, the food is delicious, the staff very friendly and the accommodation more than comfortable.  We had a wonderful undisturbed night in this wonderful piece of history.

Watch our Paranormal Investigation at the Haunted Grand Hotel, Millicent

Sources:
Newspapers of the Day on Trove