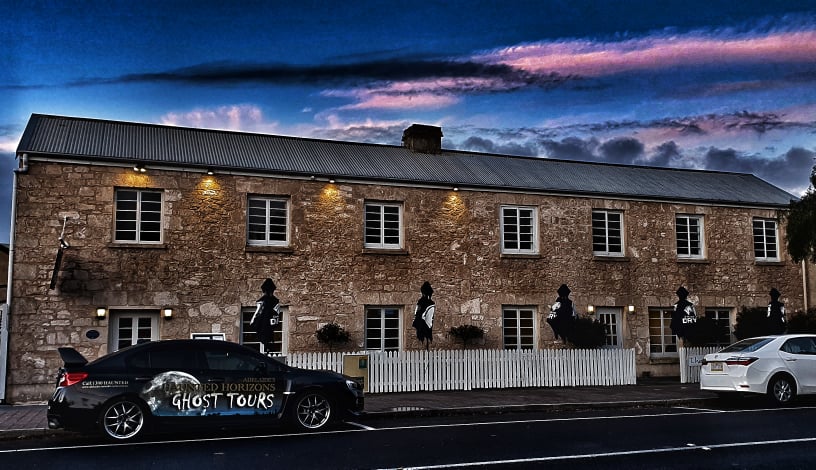 The Caledonian Inn Ghosts have been whispered about for many years and Kag and I were invited there, to check those stories out.

The Caledonian Inn, affectionally known as the ‘Callie’, sits in the lovely Limestone Coast town of Robe, which is one of the older towns in South Australia.  Robe is around 335km from Adelaide and sits on Guichen Bay, named in 1802 by the Dutch Explorer, Nicolas Baudin. Port Robe as it was first known, went on to be a busy town that had its own police station, telegraph station, courthouse and even a substantial Gaol.  By the 1860’s it also had 10 licensed hotels, including the Caledonian Hotel.

It was the Caledonian’s first licensee, a Scotsman by the name of Peter McQueen, who built the Inn in 1858 and it quickly became popular with not only the townsfolk but also the crews from ships that docked in the port.

The Caledonian saw well-known characters from South Australia’s past stay, including the well-known Australian poet and horseman, Adam Lindsay Gordon.  Gordon had arrived in Australia and signed up with the South Australian Mounted Police and was stationed in Penola.  He was a talented horseman and left the force to train and race steeplechasers.  He once jumped a fence at the Blue Lake in Mount Gambier to find himself on a rocky ledge, 60m above the lake.  A monument now stands where he jumped to commemorate this feat of horsemanship.  It was in Robe that Gordon met Margaret, the niece of the landlord of the Caledonian and moved in to be closer to her, before finally marrying and moving away.

There were also shipwrecks in Guichen Bay, the most famous being the Koning Willem II in 1857, an 800-tonne Dutch ship that was carrying 397 Chinese passengers.  After unloading the passengers, bad weather hit, and the Koning stayed put in the bay but was eventually ripped from its moorings.  It continued to be battered by the ocean and eventually broke up, resulting in the loss of 15 crew.  The wreck was salvaged and sold for various uses throughout the town with some of the timber and doors being sold to Peter McQueen who was then building the Caledonian Hotel. The remains of the Koning Willem II can still be seen today in the Caledonian Inn. If you were to book accommodation there, you will be entering your bedroom through one of these amazing and very historic doors.

Stories about the Caledonian Inn Ghosts

It was her lovely owners’ Holly and Jeff Prest who contacted us to see if we would visit their beautiful Hotel to find out what was happening. Past landlords and staff had reported some strange goings-on.  As they had just been finishing renovations, nobody was staying in the accommodation at this time, so it was the perfect opportunity to visit.

David Murch was the publican of the Caledonian for 17 years.  When we talked to him, he told us that he believes that one of the Caledonian Inn ghosts is a female, as he heard and felt her presence there on numerous occasions.  He told how a lot of the activity centred in the dining area, especially table 8 which sits close to the door to the bottle shop.  He constantly had cutlery shift from that table, sometimes in the space of only 10 minutes.  He knew the building was locked and that he was the only person in there.  David would do his final check around the premises only to come back and find the cutlery moved from table 8 to table 9.  Holly reported that it has happened once or twice since taking over.  David also told of how one night, he walked into the bar and saw a group of people in old-style clothing despite the hotel being closed.  We debated whether this was residual and for whatever reason David had a glimpse of the past?  He did say that despite the activity, he never felt uncomfortable and even invited the female presence to chat.  He called her Elspeth as he feels he was told this by her in his mind.  Strangely while investigating, we found out that Peter McQueen’s wife was indeed called Elizabeth… Elspeth is the Scottish nickname for Elizabeth.

We were shown our rooms, which were said to be the more active ones.  Kag and I had opposite bedrooms at the far end of the hallway.  This is where a figure of a man has been seen and guests report being woken by footsteps during the early hours of the morning.

We didn’t find many deaths in the hotel itself to account for the Caledonian Inn ghosts, in fact, it seemed very well behaved, despite its long history.  The original owner, Peter McQueen did pass away in 1868, at a fairly young age of 42, after a long and painful illness, leaving behind his wife Elspeth and five children.  Although Elspeth passed away aged 67 in North Adelaide, could she have returned to be with her husband?  Or maybe the timber and doors hold on to energy from the shipwreck itself?

So, did we find the Caledonian Inn ghosts?  While we waited for the Hotel to close, we started upstairs in the hallway where the figure of the man has been reported.  We usually like to start with an E.V.P. session (electronic voice phenomena), but with the Hotel still open, we couldn’t be sure if any voices caught were just coming from the bar below.  So we fired up the portal instead (ghost box).  There was a lot of interference so quite annoying to our live stream followers, so we decided on the quieter Estes method (ghost box with headphones).  There were a few curious responses, seemingly referring to the ocean, including ‘captain’ a couple of times.  When we also asked if whoever was there was related to the Chinese immigrants that came through, there was an immediate “yes”.  Thousands of these immigrants preferred to land in Robe and walk to the Victorian Gold Fields, as this way they avoided taxes.  Some of the responses also referred to drowning and “Captain”.  The most interesting responses, when drowning was referred to, was “Our death” and then “many”.

Once the hotel closed, we moved downstairs, to focus on the area of table 8.  We didn’t have anything on E.V.P. but as we discussed how quiet it was there was a large bang from the room with us.  We had no noises before or after.  The only response we got was when we asked Elspeth if she was with Peter and the response on the portal was “Pete” or “Peter”.  We also got an “out” in a Scottish accent.  “Elspeth” was another name that we seemed to get out of the ghost box.

Despite having only small hits and responses, the most intriguing point of the investigation was when we left a locked-down camera facing Table 8 for the night. Nothing moved on the table, but there were constant sounds of people moving around, footsteps, clinks of glasses and even murmured voices.  As the owners don’t live on-site and had left for the night, we knew it wasn’t them.

I was more interested in the voice I accidentally caught as we were leaving.  I returned upstairs to take some last B Roll video of the hallway and doors.  On watching back, there is a clear male voice that appears to say “three, six”.  I had been alone in the hallway as Kag was downstairs packing the car.  It wasn’t until after, that one of our subscribers asked if it could mean a direction, like on a clock as a nautical term?  Could it mean he was telling me where he was standing?  If this was so, he would have been standing behind me by my right shoulder.

If the intriguing responses that we got were ghostly in nature, then there is nothing bad there.  Possibly the original owners are still around, and it would be lovely to think that Elspeth returned to be with her beloved husband, despite the years and distance between their deaths.  We both had the most amazing nights sleep, totally undisturbed.  It is certainly a beautiful and friendly place to stay and as a bonus, is steeped in history.

We are very grateful to Holly and Geoff for inviting us to spend some time looking for the Caledonian Inn ghosts.

Video of the Highlights from the Investigation