The British Hotel ghosts have been whispered about for many years and taking into consideration how old this hotel is, it wouldn’t be surprising if some of her past residents remain to this day.

This wonderful part of history is one of the oldest hotels in Adelaide, being built in 1837 and licensed in 1838.  It was built the year after British settlement had started in South Australia.  For many years it was referred to as the British Tavern rather than a hotel.  It was Stephen Paris and William Teasdale who together, founded the hotel.  It served as a popular drinking place as well as accommodation throughout its long history.

Today it is just as popular, and unlike many hotels these days, has managed to keep its old-world charm and history intact. Although it does not offer accommodation anymore it does serve amazing food which we obviously had to try out!

The British Hotel Ghosts and Deaths

We had a quick look into the history, and especially the deaths, to see if we could find anybody who would account for being one of the British Hotel ghosts.  We did find a couple, and with more research may have found more.

In 1864 John Forster, a farmer from Gilles Plains, was returning home but as he lead his horse and dray into Finniss Street, he slipped and fell. Unfortunately,  he fell into the path of the wheels of the dray which passed over his body.  Witnesses quickly took the injured man to the British Hotel and a doctor was sent for.  On arrival, the doctor found several broken ribs which had punctured one of his lungs as well as injuries to the kidneys.  There was nothing to do for him, and he passed away in the hotel, sadly leaving a wife and several children behind.

In 1871 a 60-year-old gentleman was found floating off the beach in Glenelg.  He was face down in 2ft of water and had been fully clothed. He also had a small wound at the back of his head but no rocks in the area that he could have hit it on.  He was recognised as Thomas Spencer, who was a boarder at the British Tavern. He had not shown any signs of depression, although later people came forward to state that he never really got over the death of his wife.  The finding was that it was drowning that killed him and that he either fell or was pushed off the jetty.

Could either or both of these gentlemen account for the British Hotel ghosts and the activity reported there, or could it simply be a past patron who was attached to his favourite haunt (pun not intended).

The staff told us that they think one of the British Hotel ghosts is Claude, who was said to be a past patron who passed away.  He has been witnessed and it is also thought he was responsible for the time that all the kegs in the basement had been tapped into the wrong lines.  Richard, who was the publican at the time, checked the CCTV footage but could not see at what point this happened, whether by a living person or deceased.

Staff have also said they often feel uncomfortable in the upstairs area, which although is now one big room, was once accommodation bedrooms. 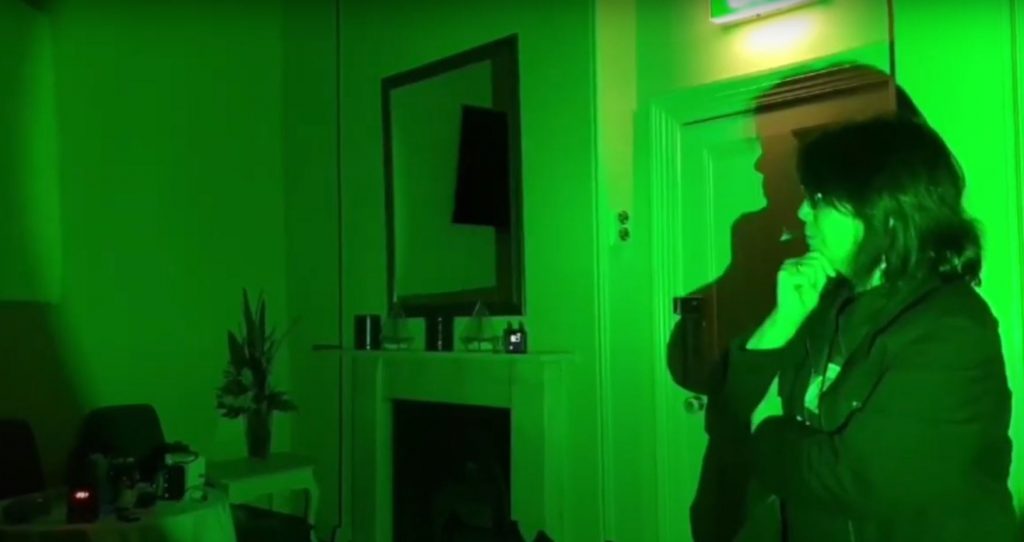 Our Paranormal Investigation at the Hotel

We really didn’t know if the British Hotel ghosts were real or whether they were just stories told at the bar but Kag Allwood and I decided to find out for ourselves and Jamie, kindly allowed this.  We weren’t worried if we didn’t get anything, as the whole process was more about live streaming and highlighting these wonderful tourism/hospitality locations to help them a little during this pandemic induced downtime.

Due to the hotel being open until late, we focused our attention upstairs in the big room.  As we were explaining to our watchers about it once being smaller accommodation rooms, the Rempod (a device that sets up its own field and alerts if disrupted), which we had placed by a small table started to trigger.  This small table was to become a big part of the investigation later on in the evening.

We started with an E.V.P. burst (electronic voice phenomena – voices on recordings not heard at the time).  We didn’t have too much success with this as there were no voices on our recording during playback apart from distant voices from downstairs.

We moved to the Estes experiment (ghost box with headphones).  It came out with the name “Richard” and “no gender” which was interesting, as we have always wondered whether gender means anything on the other side. It turned out that the publican before Jamie was called Richard, as was one of the first publicans.  We turned on the ghost box/portal and started to ask questions.  One of the first clear words to come out was “publican”, the second clearest word was “C U Next Tuesday” which we would be surprised if local a.m. radio stations would come out with!  We asked if whoever it was had a problem with women and it responded with “They breathe”.

Suddenly the words changed and referred more to “leave” and even a “don’t talk to me” followed by “just leave”.   We took a break and went back to E.V.P. but again to no avail.

Turning the portal back on, it came out with my name and it was at this moment I thought I would reach up to the small table for a pack of cards placed there, so I could play with whoever might be around.  As I reached up and grabbed them from a crawling position, the table overbalanced and came crashing down on my head knocking me to the ground.  It also crushed the Rempod that was underneath.  Was this why the Rempod by the table kept alerting us and why we were being told to leave?  Was it a warning of what was to come if we didn’t? If so we obviously weren’t paying enough attention!  Once Kag had pulled herself together and stopped laughing, we heard the portal come out with “Your head” and “are you OK?”.  Other words that came out were “Table”, “Oh dear”.  But concussion or not, our dedication caused us to continue the investigation!  As I spoke this out loud, it came out clearly with “Concussion”.  Interestingly, there were no more ‘Leaves’ after the table incident.  Instead, they appeared to become playful, with the portal coming out twice with the right number on the cards I was holding up.

It was definitely a curious investigation, despite my painful experience.  As we were thinking of packing up it did come out with “End” which we agreed was probably a good point to finish.

Definitely visit and say hello to the British Hotel ghosts and the staff.  It is a delightful place to have a drink and soak in the history and the meals are amazing!  We would like to thank Jamie for allowing us this opportunity.

Watch the Highlights from our Paranormal Investigation