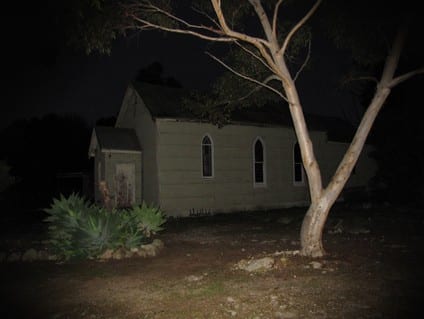 During our visit to Tailem Town on Saturday night (hosted by the fabulous team from Adelaide’s Haunted Horizons) my partner and I split from the main group and went with Anna to start investigating the Church. Not too long after we started my partner Adam had the sensation that his airways were being cut off. He started coughing and his voice went scratchy. The feeling soon subsided and we continued on our investigation. A little time later Anna and I both saw a dark solid figure in the backroom of the church.

A little time later I saw at the back of the church a tall dark figure but only the waist up. Definitely a male build and in the same area as a dark figure was seen on Easter weekend. I looked directly at ‘him’ and when I turned my torch on… he was gone.

Sometime later when Alison went looking for her car keys, I joined her on a walk around the town to try and find them. We heard footsteps several times, voices, and even a whistle as if calling a dog. I also had the feeling that there was someone walking towards us and as if I had to move out of the way or I’d walk into them.

Then sometime later again when we were all in the church. We were talking about the dark figure in the back of the church and whether it was an angry spirit or not when I started getting extremely hot and started feeling very angry toward…s everyone and a feeling of disdain towards them. When my partner asked me if I heard the noise behind us and everyone was talking about it I had the strong feeling that I wanted to tell them all that they were a ‘bunch of ****ing idiots” which is certainly not in my nature or something that I would normally feel in that sort of situation. It took leaving the church for the feeling to go away.