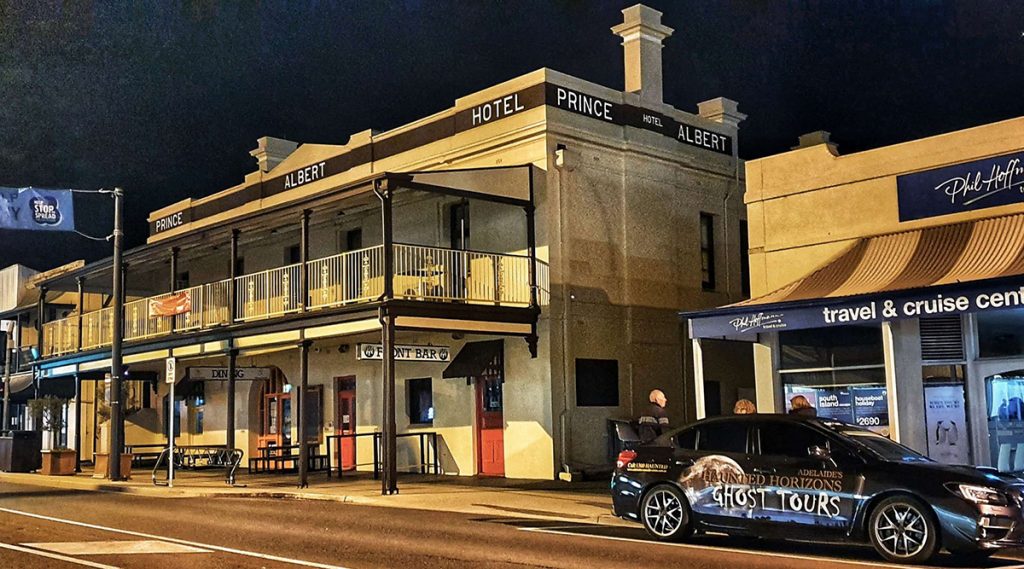 The Prince Albert Hotel Ghost… does it exist?  We were kindly invited to find out by the Hotel owners, as they have had a few strange occurrences that have made them wonder.

Originally known as the Prince Albert Inn, it was opened in 1859 and belonged to John McEwen and his wife. It was built in a time when there was already a multitude of pubs in Gawler, the oldest being the Old Spot Hotel or, Golden Fleece as it is known now.  However, with the copper being brought down from the North by the bullock drivers, and Gawler being one of the main stopping places for this slow-moving transport, there proved to be plenty of trade to go around.  John McEwen ran the Hotel until 1864 before handing it over to his Son-in-law, Patrick Blake.  Blake had spent seven years as a police trooper and was not only well respected but was also married to McEwens oldest daughter, Bridget.  He ran it until 1869 and then took a break before resuming again in 1870.

The Prince Albert Hotel was fairly well behaved for a Hotel back in its day.  A quick look for deaths does not reveal too many answers as to who the identity of the Prince Albert Hotel Ghost could be. We did find one death though and this is why, when writing the history, I focused on the first two owners of the Hotel.  Sadly, the wife of Patrick Blake and daughter of John McEwen, Bridget, is listed on the Pioneer Park Burials as passing away at the young age of 30 in 1868.  Unfortunately, it does not state how she died nor can I find an inquest. This could possibly mean natural causes such as disease or childbirth. [If anybody knows this information please feel free to let us know so I can amend this].

Tragically, just over a year later, Bridget’s mother took her own life. John McEwen had an abusive nature not only to his wife and family but had found himself in court several times for assault. Mrs McEwen was forced to flee one final time, sporting a black eye and other bruises on her throat and face. John McEwen had been witnessed to have knocked her to the ground and dragged her around by the throat and hair (something that had been witnessed before) before storming out of the house.  At this point, they were living on a farm in Gawler River.  Mrs McEwen turned up at Dr Popham’s home where he gave her sanctuary.  Sadly, she returned to her home and not long after was found floating 30-40ft down in the well.  Having lost four children including her eldest, daughter Bridget the year before, and suffering such abuse from her husband, she had become more depressed and obviously decided there was not much future for her.  It was her remaining daughters who discovered her body.  That same year, John McEwen took over the Prince Albert Hotel once more before it finally passed on to other hands in 1874.

The present owners are father and daughter, Richard and Staci.  They became the licensees there in 2018.  Staci told how one night she was watching the cameras and saw a couple of strange things on the security cameras.

Sam, then manager, told us how guests too had reported strange things.  One guest had been sitting in the Atrium and reported seeing and feeling a gentleman ghost at the fireplace.  He had also been told of footsteps and doors slamming.  This was backed up by the bar staff that were there to help on our night.  One room in the Hotel that none of them were comfortable in was down a short hallway.  It is only a small room which is now used as an office.  They told us that there was something about it.  Often they would walk in and smell tobacco smoke, despite the Hotel being a non-smoking building, but it isn’t there all the time. We were to witness this ourselves later in the evening.

The smoke was interesting the staff told of when the smoke alarm went off one night upstairs.  There were three of them on duty so they all ran up to check found what looked like smoke everywhere but no source of the fire. They described it more like an old-style heavy smoking room.  Within a couple of minutes, they said it cleared.

And so it was that we started our hunt for the Prince Albert Hotel ghost.  We started upstairs where the flashing motion-activated balls activated on the alcohol that we were using as trigger objects.  We swapped the balls out with others and still, they flashed on the objects.  Our helpers from the Prince Albert Hotel settled themselves around the table and it wasn’t long before one of the guys stated he felt the chair he was sitting on was freezing cold.  It should have warmed up with his body heat but he insisted it was cold enough to feel through his clothing.  Taking a temperature reading it was indeed cooler where he was sitting against readings of others close by.

We didn’t get anything on the E.V.P. session (electronic voice phenomena) so moved to the Portal where we did get some curious responses regarding the place being haunted.  A female did say a clear ‘leave me’.  With not much else coming through, we moved to the Estes Experiment (ghost box with headphones). When we asked how long they had been there, an immediate answer of ‘A long time’ came out. On asking when it was they were there, we received ’69 out of it, possibly referring to 1869? At the time we didn’t know that this was the year that Patrick Blake after losing his wife the year before took a year off from running the Hotel.

We moved on to the small room down the hallway and as we walked in, there was an extremely strong smell of old tobacco as described by the staff earlier.  As we set up it disappeared rapidly.  While doing a portal session it came out with the name of the lady who feels the most uncomfortable in that room, Jess, and when she asked if the person stayed in that room most of the time, she received an immediate ‘yes’.

Next Craig and Kag went down into the cellar for an Estes experiment and again there were a few curious responses but nothing that proved who we were possibly talking to.  Upon returning upstairs we all finished in the now-closed bar to continue but again there was only the odd curious response out of the portal, including saying the names of some of the people in the room.

I am not sure if we managed to answer any questions on just who is the Prince Albert Hotel ghost really is, but we certainly got some interesting responses.  Most can be seen in the video below.

We would like to thank Staci and Richard for allowing us to investigate and showcase this lovely part of Gawler history and to Sami for organising it for us.  Definitely top by the Prince Albert Hotel for a meal as the food is amazing (as are their espresso martini’s!).  Don’t forget to support local tourism/hospitality at the moment as they are doing it tough.

©Adelaide Haunted Horizons 2021 – not to be reproduced without permission