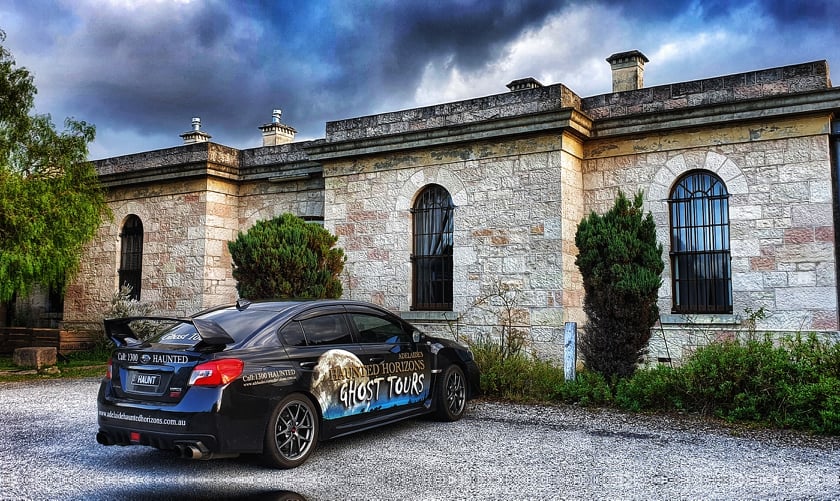 The beautiful town of Mount Gambier is approximately 4hr 45min (436km) from Adelaide, and well worth the visit.  The town is nestled in the volcanic region of South Australia and the Blue Lake and Mount Shank, formed by volcanic craters, are clear reminders of this. You will find Old Mount Gambier Gaol in the town on Margaret Street and it offers unique accommodation.

Old Mount Gambier Gaol was built in 1866 and finally closed its doors as a working prison in 1995. Although many prisoners found themselves incarcerated there for crimes such as larceny and vagrancy, there were a few held there for more serious crimes such as murder.  Three men found guilty of this crime finished their days at the gaol, after being sentenced to “hang by the neck until dead”.  These three prisoners still remain today as they were interred within the precinct of the gaol.  The location of these three graves is only guessed at now, as is the question of who is buried where.  This is largely due to the grave markers being long gone and records not giving any indication of where they were placed. 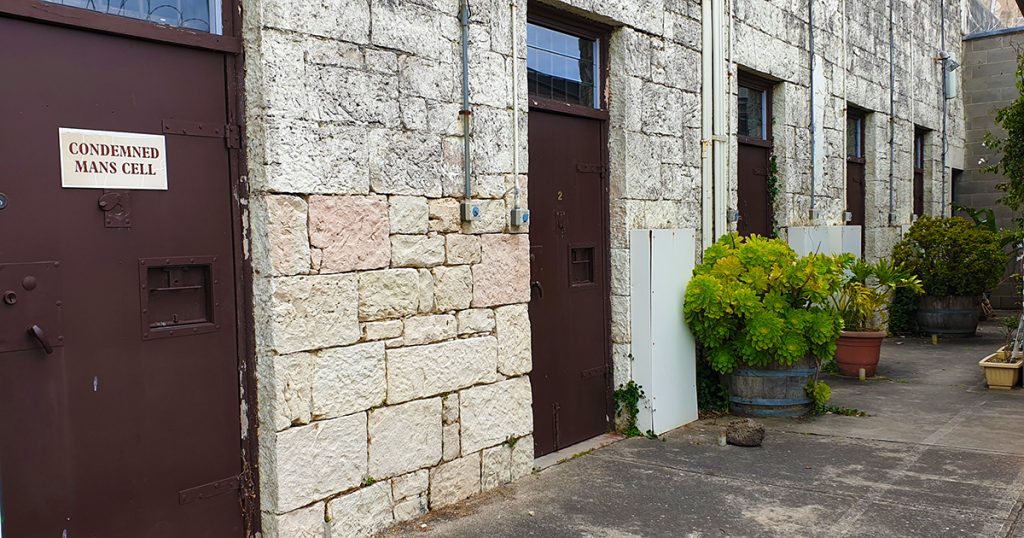 Executions and Other Deaths

Carl Jung was the first man to be executed at the Old Mount Gambier Gaol, on 10th Nov 1871.  Carl’s crime of murder was committed under sad circumstances unlike the other two.  Carl Jung, a bootmaker, had fallen on hard times and got himself into debt.  He was struggling to provide for his family and became more despondent.  He had also lost his daughter which hadn’t helped his state of mind.  Assistant Bailiff, Thomas Garroway was sent out to seize property to offset Carls debt.  Carl offered his hospitality to Garroway, giving him food and accommodation for the night, and they both agreed that he would simply take Carl to Mount Gambier to discuss his debt.  However, for whatever reason, Garroway had a change of heart the next morning and instead, started seizing Carls property, including his horse and cart.  As Garroway left the property, Carl who was said to be very distressed, followed him.  Shortly later Garroway’s body was discovered with three gunshot wounds, two to the temple.

When Carl arrived home, he sold what he had remaining and then tried to take his own life, going to his daughters grave to do so.  He took an overdose of Laudanum, lay down on his daughters grave and waited to join her.  Although very sick, his attempt failed and he eventually returned home, where he was arrested by the police.  He admitted to the murder and expressed his remorse at having done what he had.  He also stated that it had been an accident.

Carls trial had a lot of support in his defence as local businessmen petitioned to have his sentence reduced.  They pointed out that Carl had been under extreme duress and ‘was not of sound mind’ when he killed Garroway.  The petition fell on deaf ears and Carl was sentenced to “hang by the neck until dead”.  As he stood on the gallows he requested that the bunch of flowers that he was holding in his hands should be given to his beloved wife after his death.  With that, he departed this world.

William Page (alias William Walker) was the second man to be executed on 27th Oct 1875.  He had assumed the alias because he had just deserted his family and was avoiding persecution for theft too.  While in Mount Gambier Page met a young lady, Mary Buchan and got engaged but, whenever marriage was mentioned, Page would avoid the discussion.  Mary’s family started to become suspicious and encouraged her to break off the engagement.  Mary met with Page one last time where he tried to pressure her into having sex.  She rejected his advances, returned his ring and went to walk away from him.  He hit her over the head before strangling her to stop her screams.  Her body was buried in a nearby field but local police were swift to put the pieces together and he was arrested and sentenced to hang.

William Nugent (alias Robert Johnson) was the final execution at the Old Mount Gambier Gaol on 18th November 1881.  Trooper Pearce had charged William with supplying liquor to the local Aboriginal people and asked Nugent to come back to Kingston to face charges.  Nugent had also been leading three stolen horses so he knew that he was in big trouble.  Nugent pretended to be obliging to the request and then waited for his chance to escape.  When it came he produced a knife that had been hidden in his boot and he attacked Pearce.  Nugent then made his getaway, leaving Trooper Pearce wounded.  Pearce was found soon after and was able to identify Nugent as the person who had attacked him.  Three days later Pearce passed away and so Nugent was tried for Murder and hanged shortly after.

Could any of these three executed men be the Old Mount Gambier Gaol ghosts?  Or could it be one of the other numerous deaths that occurred in the prison?  Other deaths included suicide, disease and natural causes.

One of the first to take her life in prison was a young Aboriginal girl in Jan 1867, Liz Walton.  It was said that she was showing signs of mental health issues and sadly got the opportunity to depart this world.  Another was Patrick Kean who had been picked up for vagrancy in Bordertown.  He had only been given a months sentence but on Feb 10th, 1912 managed to take his own life too, this time in the yard, by tying a strap to a tap.  He too was said to be suffering mental and physical illness. 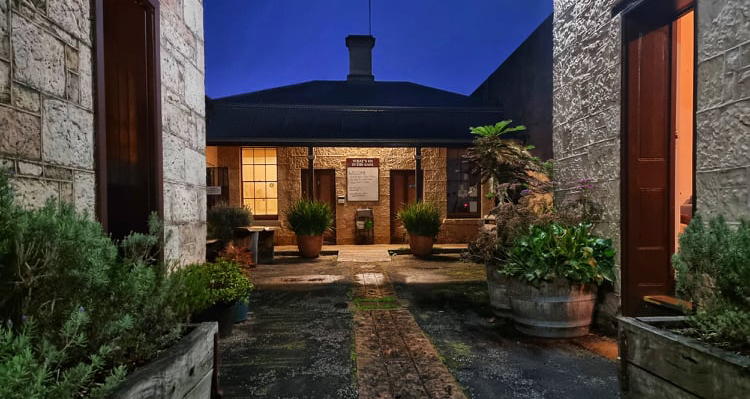 Although Mel and James have never promoted the Old Mount Gambier Gaol ghosts, as they focus on being an accommodation place, they live peacefully with any spirits which remain there.  They do get the occasional guest, especially in cell 4, reporting hearing voices, being touched and also for whatever reason, their feet being played with.  I also had an experience on my first visit, when Kag and I stopped there for a night.  I woke up in the early hours of the morning hearing things moving slightly on the bedside table, almost as if something was curiously rifling through my things.  Being too tired to care, and with it not feeling bad, I just closed my eyes and drifted back into a peaceful sleep.

Mel and James have had their own experiences there, with James one day seeing a child run past the office.  At first, he thought it was one of their nephews until it dawned on him that they weren’t onsite at the time.  At first, they were confused as to why a child, but back in those days, children were put in prison.  One morning Mel was walking across the courtyard having just dropped her children off at school when a gentleman walked past.  She said hello but he didn’t respond.  As he walked past she felt a sick feeling and she turned back to look at him again but he was now gone.

Mel also found out, after she moved in, that her Great, Great, great, great Grandfather was the third Keeper of the gaol and died there.  It was strange how she came to find out as when they were fixing a wardrobe, behind the skirting board, there was an old Christmas card with a girls name on the back.  It was the same name as Mel’s.  It sent her on a bit of a search and she found out that they were related.  Maybe it was meant to be and, Mel now has it framed on her wall.

Despite the Old Mount Gambier Gaol ghosts and experiences reported there, it does feel friendly and families and kids love spending time in the prison.  As Mel likes to point out, she believes spirits are everywhere and the Gaol is no different. 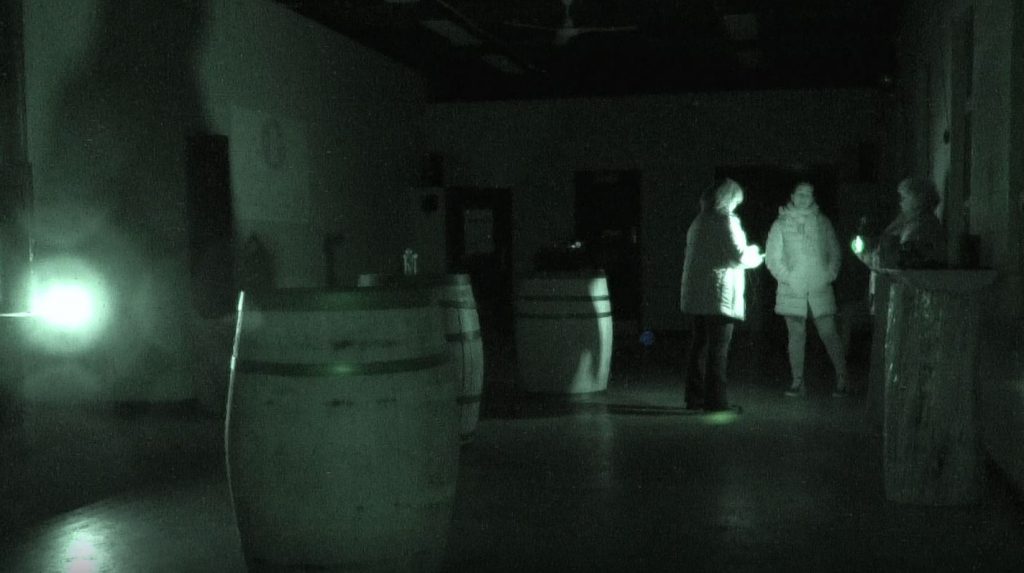 Mel and James had always worried that the ghosts would be a detriment to their main focus of running the Old Mount Gambier Gaol as accommodation, so we were very honoured that they invited and trusted us to come in and investigate what is essentially their home.

We started in the hall, which used to be a yard.  When they have had functions in there, reports have been made of a figure of a man seen crossing the room dressed very differently from the other guests.  We set up the equipment in this room and, although we didn’t get much on the equipment, our batteries to the camera did drain rapidly.  However it was cold, and batteries lose charge very quickly in low temperatures, so we can’t say this wasn’t the cause.  With nothing on our E.V.P. (Electronic Voice Phenomena) session, we moved to the Ghost Box (broken radio running through bandwidths and white noise) where we seemed to get nothing but ‘Get out, ‘leave’ and an even clearer ‘Piss off’ which, would have been curious from a local a.m. radio station.  Feeling slightly unwelcome we respected their wishes and moved on.

Next was my lone vigil in the condemned man’s cell.  This is where it got slightly more interesting.  The door boomed shut as Kag and Mel left me and I settled myself down. I reached out to Carl Jung, as for some reason it was his story I found most touching.  The Ovilus (EMF meter that turns readings into words) came out with a few curious words, including ‘Afraid’ and ‘Flowers’, remembering Carl took flowers to the gallows with him and insisted they were given to his wife.  But it was when I did an E.V.P. session that it became a lot more curious.  On playback, when discussing how fond Mel and James are sharing their home with the spirits, we captured a male voice saying “I do” or “I too”.  This cell was to become even more interesting for E.V.P. the next night.

The following night we did a quick session in Cell 4, resulting in my phone possibly being knocked to the ground as the equipment went off, and some curious Estes Experiment responses (ghost box with headphones).  But it was the return to the condemned man’s cell that was the most intriguing.  This time we left Mel to do a lone vigil.  We left a voice recorder running as she chatted to whoever was in there, especially reaching out to Carl again.  On playback, we seemed to get numerous E.V.P. responses.  It was almost like there were constant whisperings in the room, most though couldn’t be made out. This was very similar to one other investigation we have done at the Villisca Ax Murder House in America.  One E.V.P. response was much clearer though, a child’s voice saying “I see you!”.  Not creepy at all!

All in all, the Old Mount Gambier Gaol ghosts, if they are there, do appear to be very friendly and almost curious.  They seem to be at peace with Mel and James as much as Mel and James are at peace with them being around.  It was a lovely place to visit which offers such unique accommodation.  We thank Mel and James for their friendship and their trust that we would handle the investigation in a sensitive and professional manner.  We can’t wait to return!

Watch the Highlights of our Investigation Below