Paranormal Field Investigators and Adelaide’s Haunted Horizons had the pleasure of meeting and working with APPI – Australian Paranormal Phenomenon Investigators, who run investigations and tours in Sydney. We all came together with Ashley Hall from the Paranormal Guide for one big investigation weekend. The venues chosen were Martindale Hall, Saint Cecilia’s and Old Tailem Town. Although I couldn’t make it to Saint Cecilia due to tour commitments, I did make it to Martindale Hall and obviously the Tailem Town one.

Wow, what a grand place Martindale Hall is. I have been wanting to investigate this place for some time but had never managed to find the time until now.

Martindale Hall is a grand and beautiful Georgian styled mansion, which lies just outside of the historic town of Mintaro, nestled in the Clare Valley, South Australia.

The Hall was originally built for Edmund Bowman after he inherited the Martindale Estate from his father who had drowned in the River Wakefield in 1866. By 1879 the Mansion was completed, built of Manoora freestone which had been ornately carved by skilled tradesmen, especially brought out of England. The house and property were named after Martindale in Cumbria which was close to the family’s home town. The property was intended as a sheep station and evidence of that is still seen today.

Edward Bowman lived in style. He built himself a large stable complex and training track. He also possessed his own pack of foxhounds and even had his own cricket ground where the English Cricketers would come and stay. During this time Edward even gave license to a small group of people to hunt for gold on his Estate and they did indeed find some there.

However, in 1892, debt eventually forced Edward to sell Martindale Hall to William Tennant Mortlock, who bought it a year after marrying his cousin Rosina Tennant. They had 6 children of which only 2 survived adulthood, one being John Andrew Mortlock. John inherited Martindale Hall and eventually bequeathed part of the Estate to the University of Adelaide. The rest was transferred to the University in 1965 by his widow.

For those who love movies, you would also remember that Picnic at Hanging Rock was partially filmed there in 1975. Although filmed around SA and Victoria, most of the inside shots took place in Martindale Hall.

There have been several sightings of ghosts in Martindale Hall, ranging from a man seen sitting on the back stairs in period costume, to a guest reportedly waking up and finding a child lying in the bed with her.  Despite loving all things ghostly and paranormal, that is not something I think I would relish myself.

The owner reported to us how she had woken to find a girl standing in her room, but on reflection thought it more likely to be a boy, as in the early days’ boys would wear their hair long. It is believed to be one of Mortlock’s sons, in particular Valentine who died in 1906 aged 9 years old. It was reported that he possibly had downs syndrome and cerebral palsy. Although much loved he was confined most times to his room for his own safety. She spoke to the child but the child did not respond. Valentine hasn’t been sighted there for a while and the owner likes to reassure people that all the ghosts at Martindale Hall are friendly. 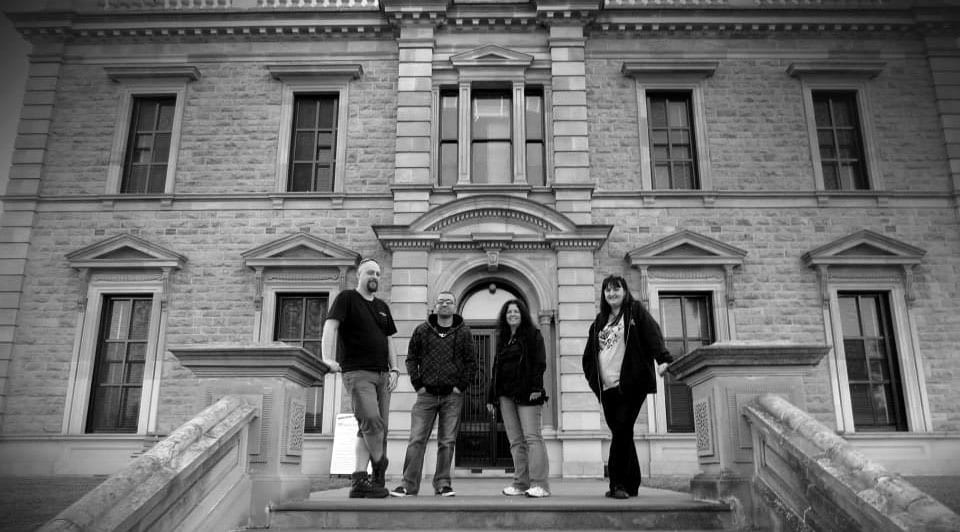 On first arriving in Mintaro, and after getting lost on the dirt back roads (don’t ask) which elicited funny looks from local farmers because of the car… I ended up in the village of Mintaro in the search of something to eat. I stopped at the Mintaro Hotel and already suspected as I pulled up, that I was going to get a reaction from all the locals who were all gathered outside now watching me park my car. There is no driving around incognito with that car! Sure enough the usual comments came out as I passed them and entered the pub to order food. However, it is here that I really would like to thank the locals of Mintaro. When they saw that I was travelling on my own, they gave me a warm welcome, the landlord even lending me his reading glasses so that I could read the menu! On settling myself outside, the locals, seeing that I was on my own, called me over to sit with them and we chatted. They made me feel like I had been one of them for years. In fact, I could have chatted all night with them, and didn’t really want to leave my new but temporary friends. Thank you Mintaro… you are a special place with wonderful people!

Moving back to Martindale Hall, I joined up with the other teams and after an exploration of the house and stables, we split into 3 teams. I remained with P.F.I. team member Spils and his daughter Taylor while APPI and Ash from the Paranormal Guide formed the other 2 teams.

I can only speak on behalf of Haunted Horizons and PFI on how we went and will leave the other teams to write up their own experiences of the night.

For us personally, on the surface, it would appear that we had nothing happen that was startling. We covered the stables, the cellars and the main house. The only curious point for us was as we were sitting on the second floor above the staircase. There was a strange sound from around us. We thought it was a male speaking, however on listening it seemed to be more of a reverberation much like when you speak in a large empty room and you get that slight echo. Either way, we could not account for what it was.

We still have to go through all our recordings, so although we personally did not get much happening on the night, we are hoping there might be something captured that we weren’t aware of. We will certainly let you know if we find anything.

Thank you to Martindale Hall for allowing us in to do a paranormal investigation, it is a night we will treasure.

It was definitely a great experience spending time not only in this great Mansion but also with APPI and TPG. I am so glad I got to spend time with you guys and look forward to catching up with you all again. 🙂