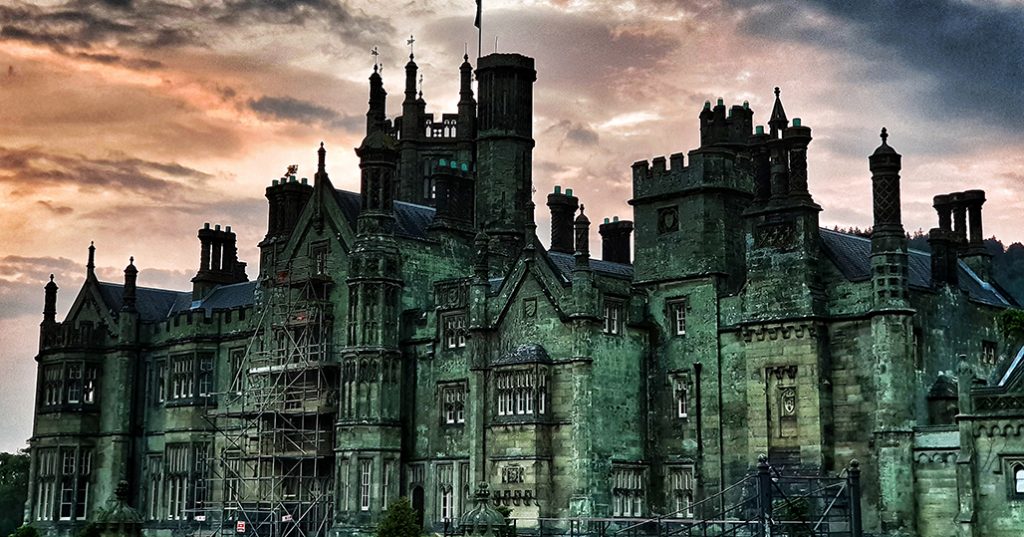 Margam Castle sits nestled on an 850-acre country estate roughly 2 miles from Port Talbot, South Wales.  It is, in fact, a large Victorian-era country home, built to look like a gothic-style castle.  Built between 1830-1840 Christopher Rice Mansel Talbot commissioned it after having returned from a grand tour of Europe.  He had fallen in love with the gothic architecture over there.  On returning to his home in South Wales he decided he wanted a similar building on his family estate.  There had been a family home prior to this, but Christopher demolished the Tudor building, to make way for his new one.

The Talbot family remained with the house up until 1942 when it was finally sold to Sir David Evans-Bevan.  However Sir Evans-Bevan soon felt that the building was far too large for his needs but could not find anybody at the time who would take it on, so slowly it fell into disrepair before the County Council took it on in 1974. Devastatingly, in 1977 a fire caused extensive damage to the building and everything within.  An ambitious restoration project still goes on today to restore this amazing place.

Although Margam Castle, as it stands was relatively new in history, the land itself had been in use for a lot longer and thought to have been occupied for around 4000 years.  There is evidence that Bronze age people settled in the area with several burial mounds being discovered in the park. Evidence of Roman occupation has also been found there.

The ruins of the 11th Century Margam Abbey remain on the grounds.  The Abbey was destroyed like many others during the dissolution of the monasteries in 1537. In fact, the first Mansell mansion was built out of and on the grounds of this abbey. 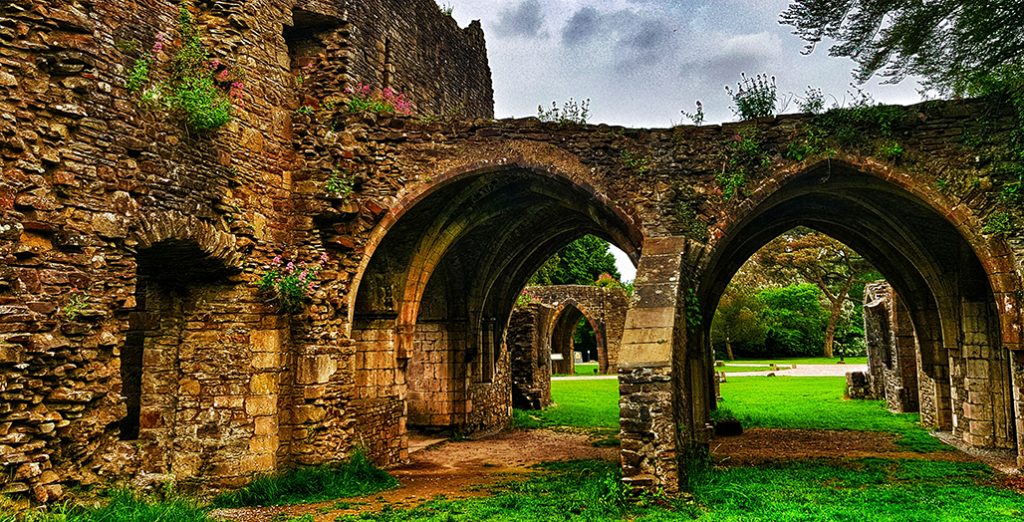 In 1898, what was described as one of the most awful crimes took place on the Margam Castle Estate.  Robert Scott (39), the head gamekeeper, discovered a poacher while doing his rounds.  Scott had sighted the poacher who had made a gap in the wall and was now inside the grounds.  The poacher realising he had been caught ran back towards the gap, at the same time Robert Scott too ran towards it, hoping to cut the

poacher off.  Scott managed to get to the gap first only to see that the poacher had a shotgun, which he did not hesitate to fire at Scott’s face.  The result was horrible with the dislocation of the lower jaw and the shattering of the facial bones.  This did not kill him though, and he managed to struggle for some distance before collapsing.  This is when the poacher caught up to him and leaned across the wall to take another shot, this time hitting Scott in the shoulder.  The poacher then took off and Scott died alone.

Poaching was rife on Margam Estate as there was plenty of game to be found.  Many gamekeepers and assistants had been attacked before, with one even having been beaten and tied up to a tree.  No attack had been as deadly as this one.

Sadly Robert Scott’s wife was left behind with a small child, his widow not even being allowed to view his body due to the horrific damage.

It is said that the angry spirit that haunts Margam Castle is that of an unhappy Robert Scott.  Although it is said that he has been sighted on the grounds of Margam Park, he is also reported on the imposing gothic staircase.  Frequent poltergeist activity, such as stone-throwing is also put down to the angry gamekeeper.

But it is not just the gamekeeper who is thought to be haunting this country house as the sounds of children have been heard running and playing.  This is more mysterious as we can’t find many reports of children dying here.  Could this be less intelligent and just be residual?  Tell that to the real children who wander off and when found, claim that they had been playing with a ‘new friend’. 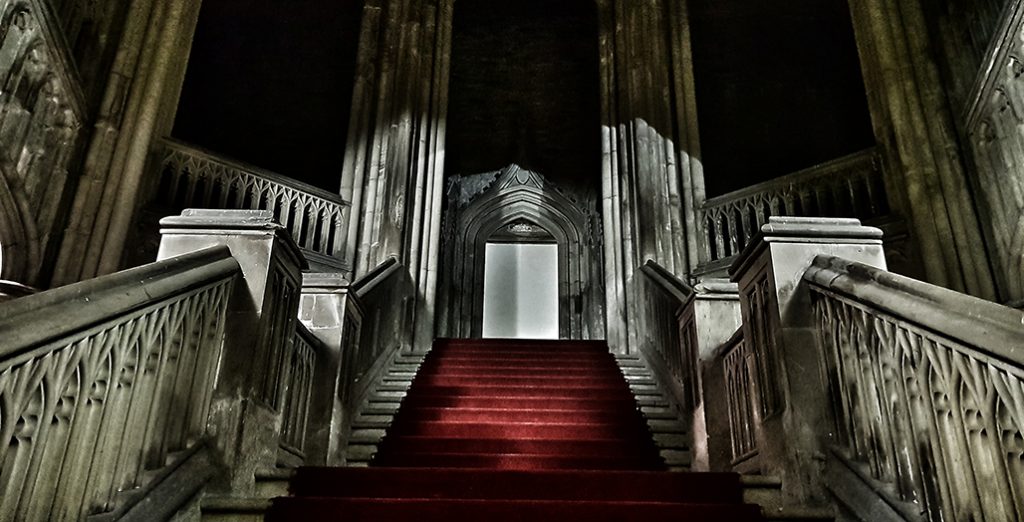 For some reason, from the very beginning, this amazingly beautiful building gave us the creeps.  No more so than the imposing gothic staircase that Margam Castle is famous for.  As we explored the building on our own, we both agreed that the staircase felt the most uncomfortable, giving us both an intense feeling that we were not welcome.  It should be remembered at this stage, that we had gone in blind, knowing very little about the history and the hauntings there.

We finally settled in the nursery upstairs where a large table and chairs allowed us to sit.  As we are not as young as we used to be, this is always welcome!  To get to the nursery, you had to walk through several rooms, a fact that did cross our minds should something happen!

It was as we were setting up, that something brushed across my arm almost as if I had been stroked.  I quickly got Kag to come over with a camera [see accompanying video] and indeed all the hair on the arm had lifted as if there was some source of static.

Finally, with lights off, we settled in the darkness and waited to see if anybody from the other side wanted to interact. It wasn’t long before we were hearing sounds in the room with us.  There was a subtle rustling as if almost akin to the swishing of a long dress.  This sound was circling us in the room and was closely followed also by the sound of somebody breathing heavily.  Strangely, was heard clearly by us, but was not picked up on the video.  The taps on the table next to us and knocks to the side, which was picked up on the video, also put us strangely on edge.  But one sound really made us jump, and that was the sound in the room behind us of a pebble or small rock being thrown.  Something we were later to find out was a regular happening in that area of the building.

We conducted a brief ghost box session and appeared to get a couple of interesting responses, not least a voice (almost electronic) saying ‘Bastard’.  Why interesting?  Because it sounded like Kag’s voice as if she was being mimicked.

We soon moved to the bottom of the staircase, but apart from a couple of loud thuds from upstairs, whatever was in the building seemed less talkative now.  We did get one interesting noise that I am unsure how to describe. If you watch the video, I will let you make up your own mind on what it is as we have no idea!  Even our security man, Dave, who joined us at the end had never heard this before.  We didn’t hear it audibly.

Margam Castle and Park is the most amazing, beautiful place and well worth a visit.  We didn’t get to investigate the Abbey ruins this time around, as the house kept us busy… maybe next time!

VIDEO OF OUR INVESTIGATION AT MARGAM CASTLE