Jedburgh Castle Jail is a title that is a little misleading as this facility was never a true castle.  So just how did this Georgian prison get the term ‘castle’ in its name?

Jedburgh Castle Jail was built in 1823, purposely resembling a castle to pay tribute to the medieval castle “Iedd-brugh’ that once stood on that same spot.  The 12th Century Scottish castle was originally built by David I as a Royal Castle.  In fact, his grandson and successor, Malcolm IV died there in 1165.  It changed hands numerous times between the Scottish and the English.  When William I was captured by the English, to secure his release the Scots agreed to hand over five of their castles to the English, including Jedburgh.  It was only 15 years later though that Richard the Lionheart returned them for money.  And so it was that Jedburgh Castle ownership went back and forth.

Alexander III, who became King of the Scots in 1249, married at this castle and was said to have been visited by a ghostly apparition who foretold his death.  This apparition was said to have appeared many times, always with similar warnings.  In 1246 it once again came under English rule and stayed that way until 1409 when the Scots finally managed to retake it, and tiring of the English decided to demolish it once and for all so the English couldn’t use it as a fortification against them ever again.

It didn’t work, Castle or not, the English continued to raid and seize Jedburgh.

The site was later used for executions and became the site of Jedburgh’s gallows and the name Gallows Hill still remains.

Finally, in 1823 what little remained of the old castle was removed and the Jedburgh Castle Jail was built in its place.  It was built as a Howard Reform Prison.  In 1773 John Howard had been made High Sherriff of Bedfordshire and took it upon himself to visit prisons.  He was appalled at the conditions and visited more around England. He put proposals forward so these conditions would be improved.  He felt there were prisoners that would benefit from being reformed rather than punished and worked towards this.  After his death in 1790, the Howard Association was formed, a charity group that continued this work.  The Jedburgh Castle Prison was one such reform prison and is the last Howard Reform Prison left in the country.

Jedburgh Castle Jail shut its doors in 1886 and is now operates as a museum.

There have long been reports of ghostly goings-on in Jedburgh Castle Jail.  Shadowy figures have been witnessed, disembodied voices heard and even poltergeist activity.

When we got there Elliott our guide, who did not believe in ghosts, said he had witnessed too many strange events himself.  He related how on one night he was there, he witnessed a group table tipping.  He also watched as the group tried to keep up with the table as it started to walk by itself down the hallway towards him.  Another incident that he said he would not forget in a hurry, was the night a lady had her hand resting against the door frame.  She screamed as the big heavy cell door suddenly slammed itself shut, crushing her fingers in the process.

Could it be the unhappy spirits of Edwin McArthur or Thomas Wilson who were executed in the 1800s?  Or could it be something darker from prior to Jedburgh Castle Prison being built?  After all, there was bloody history going back centuries.

It is always amazing when Kag and I rock up at a venue, it never fails that the host for the night always peers over our shoulders to see where the rest of our team are.  Nope, just us!

It has been a privilege to be in these historical locations, and Jedburgh Castle Jail was no different.  Elliott, our host for the night, guided us around the prison and updated us on the history. All seemed well until we got to the male block with the infamous cell 18.  This block had only recently been opened to paranormal investigations and is not open to the general public.  As I interviewed Elliott, Kag wandered off down the corridor to the staircase at the end but returned quickly without saying a word.  Once I finished with Elliott I too wandered to take photographs and came across the stairwell at the end.  For the first time since arriving at the venue, everything bristled.  Something did not feel right about that stairwell.  Despite the birds singing and it still being daylight, the mood there felt dark and heavy.  I too quickly returned to Kag and Elliott and made mention of it.  Kag then opened up that she had felt the same and was why she had returned so quickly.

Because of the foreboding feel of this cell block we decided this was where we needed to start.  After picking up our gear and parting from Elliott, we returned to set up some equipment.  No sooner had we got to the top of the stairs, we both heard a strong male voice reverberate around the cell block.  We knew Elliott was still back in his office and there was nobody else with us.  Our regret was that we weren’t recording at this point.  We couldn’t distinguish what was said, but with this and that definite ‘something isn’t right here’ feeling, it certainly had us on edge from the start.

A lot of what we had happen, was more of a personal nature and not so much an event caught on camera.  As I was standing at the end of the hallway next to a table, there were 3 clear raps next to me.   My torch at one point felt like something was trying to pull it out of my hand, as well as having pressure on my shoulders as if somebody was trying to get me down to the ground. 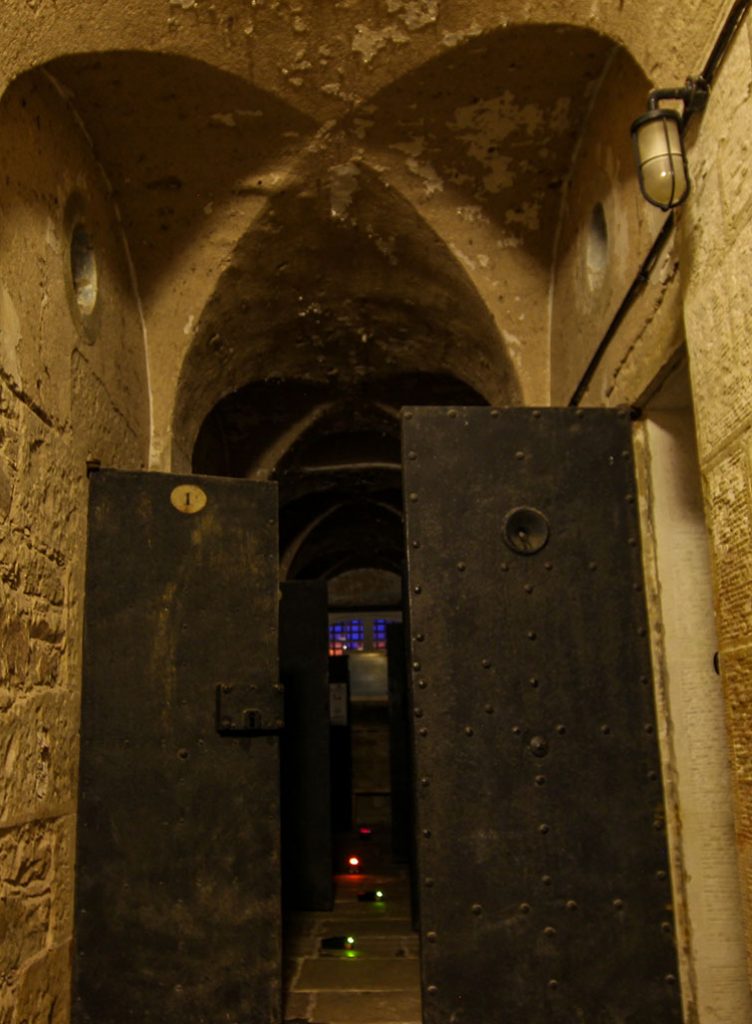 We had some equipment trigger, but we weren’t getting too much so we moved to the Bridewell Block which proved a little more curious. At one point, Kag was demanding that they step out of their cell, and at that precise moment, the Rempod (proximity device) triggered as did the EDI both at the same time.  Soon after we also had footsteps at the end of the hallway.

We did do a live stream investigation to our page from Jedburgh Castle Jail, and everybody watching asked that we returned to the male block and in particular cell 18.

So back we went, and we settled ourselves in the dark of cell 18.  As we were questioning to see if we could get any response, we were startled by 3 loud knocks out in the hallway near our door.  Again on edge, we waited to see if it would be followed by any further sound.  Interestingly the building had been silent the whole time.  It is a solid stone building and appeared to give very little movement sound.

We decided to play with the Ghostbox (broken radio) and turned it on.  Three times it appeared to say “We’re here”, one time repeating straight after I said it, almost as if mimicking me.   The most interesting response, however, was when I asked why whatever was there broke the fingers of the lady.   I asked if she had been annoying them to which the box replied with an immediate “no” but then it added “she’s a c@#t”… Not something you usually hear from a radio station!   Although I sit on the fence with this device, we can’t deny we have had some curious things come out of it from time to time.

With that our night came to an end.

We would like to thank Jedburgh Castle Jail for allowing us the freedom to explore and especially Elliott, our wonderful host for the night.  Hopefully one day we can return and explore further.