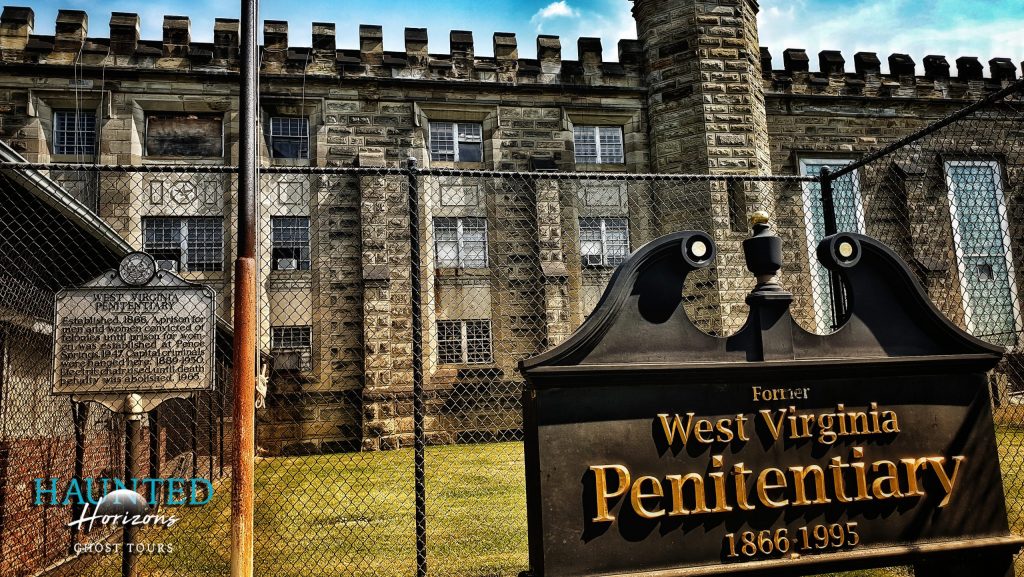 The West Virginia Penitentiary in Moundsville was built in 1876 and closed in 1995.  During its working history, it was deemed as one of the most violent prisons in the U.S.A., seeing its fair share of riots, murders and executions.  Conditions were less than adequate and humane, with the cells and rooms crawling with vermin and cockroaches.  This hadn’t always been the case though.  It was first reported in the early 1900s as having had good conditions, with decent food and education.

As time went on though and it became more overcrowded, this prison was eventually ranked in the United States Department of Justice’s top ten most violent prisons.  Much of this violence took place in a room named the ‘Sugar Shack’. 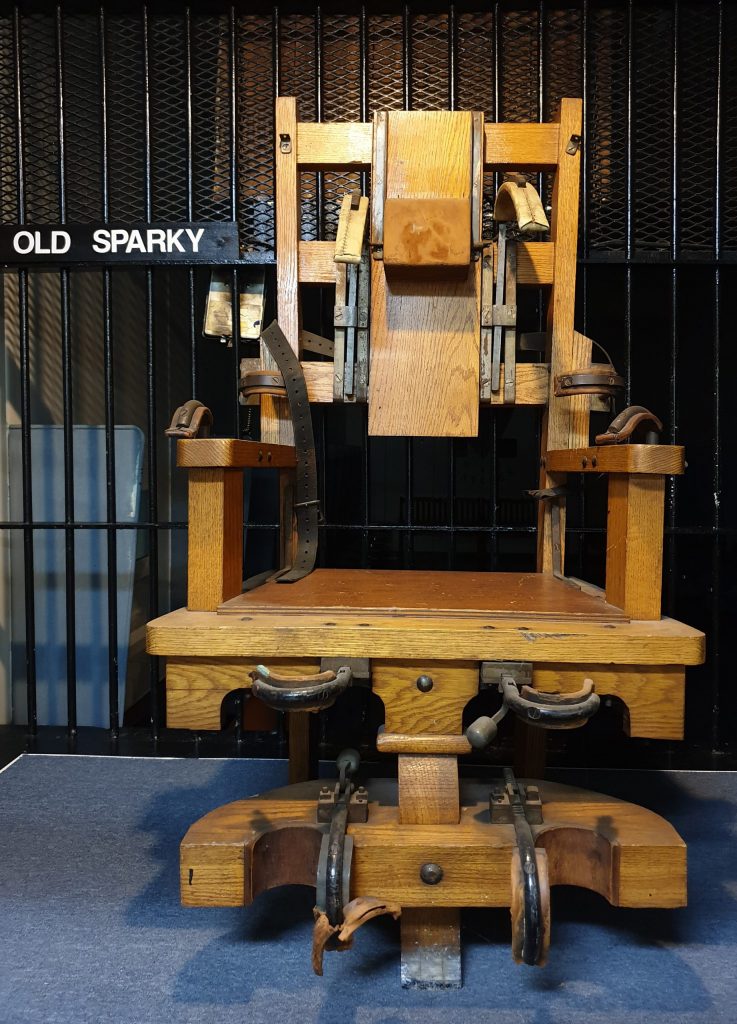 During its operation, there were 36 reported murders and 94 executions.  This does not take into account the suicides and accidents which take the total number of deaths to nearly 1000.  Executions were carried out by hanging the condemned until 1951 and then they turned to use the electric chair or “Old Sparky” as it was affectionately named.  The reason for this change was due to Frank Hyer who had murdered his wife.  He had been led to the gallows in front of a crowd of eager spectators.  However, once the trapdoor dropped, a realisation quickly dawned that calculations must have been incorrect, as when the weight of Franks body hit the end of the rope, it decapitated him in front of what was now probably not such an enthusiastic crowd.  After this public executions were stopped and it became by invite only.

A well-remembered event at the Prison was the 1986 riot.  Conditions were so bad by then that the prisoners felt they had to protest.  Bad plumbing and vermin/cockroaches were causing health problems and overcrowding (more than 2,000 men) was also a problem.  Locks were constantly picked and prisoners roamed the hallways freely.  Guards were often stressed with their working conditions.  A group of prisoners decided to rebel against the situation and awful conditions.

Twenty inmates called the ‘Avengers’ stormed the mess hall where 6 officers including Captain Glassock were taken hostage and handcuffed.  Over the course of this riot 3 of the inmates who had been accused of being snitches were tortured and killed.  Another inmate, Danny Lehman, was chosen to negotiate with authorities (he was later murdered in the prison) and it did result in a new list of standards.  Eventually, it was deemed that the conditions and size of cells were still too inadequate and in 1995 the doors shut for good.

The West Virginia Penitentiary is now used for tourism and as a museum.

Many experiences and tales have been told about the West Virginia Penitentiary and probably not surprising considering its violent history.  On top of the Prison violence, it is also built on the grounds of the Adena Native American tribe’s sacred burial grounds.  In fact, opposite the prison is the only remaining burial mound left in Moundsville which is estimated to be 2000 years old.

A dark shadowy figure has been commonly reported from different areas of the prison, captured in a photograph taken by the resident paranormal group there, Paranormal Quest’.  A lot of their evidence can be seen on their Youtube channel (link below).

A lot of EVP [Electronic Voice Phenomena – noises on recordings you didn’t hear at the time] have been captured there including the sound of a shotgun blast and the empty cartridge dropping to the floor also available to listen to online.

With strange sounds, screams and figures walking the hallways, how could we not choose to investigate the haunted West Virginia Penitentiary?

As Kag and I arrived at the West Virginia Penitentiary, we received the greeting we often get when first rolling up somewhere like this.  The host looks over our shoulders and asks where the rest of our team are.  Nope, just us…  two middle-aged ladies out on a paranormal adventure.

The excitement of the night started very early on.  Jason, our lovely and very informative guide took us around and regaled us with the violent goings-on and dark history of the prison.  It was as we neared the medical centre, that we heard a cough at the top of the stairs.  We hesitated to listen and this was soon followed up by heavy movements on the top floor.  Creeping up we stood in the darkness and listened to the heavy sounds resounding around the building.  Bangs, the sound of glass being rattled and moved, knocks and even shuffling footsteps behind us ensued causing us to go live to our Facebook page… this was too good to miss!

My first thought was that there had to be animals in the roof, but there would have needed to be a herd of them as the noises often were simultaneous and resonated from rooms beside us, behind us and down the hallway.

This was to continue when we returned with Jason and Ryan (also members of Paranormal Quest) to investigate these noises.  Both Jason and Ryan were as surprised as us and they swear they had never heard it that noisy before.  They explained that they often hear the building settling as is common with most old buildings, but never so loud and never with such good timing to questions.

Interestingly a lot of the big bangs were in response to my talking.  Jason would ask… nothing.  I would ask and BANG!  When we were talking amongst ourselves it was largely quiet.  The equipment we had set out though remained unaffected and did not trigger up there once.

We did go live for our Patreon subscribers again and at one point we were receiving comments that our viewers were seeing a figure down the hallway.  Kag zoomed the video in for a closer look and on watching back you clearly see a transparent misty form walk across the hallway.  Could it have been a trick of light on the lens?  We have looked at every other part of the video and can not find anything similar and it does appear to be upright. Although undecided… it does appear unusual and can be seen in the YouTube video link below.

We made our way to the Psych Ward and once down there, all sounds settled down.  No further noises were heard, apart from the normal popping of metal common with building movement.

We then moved to the cell block but no matter how hard Kag tried to get a well know prisoner “Red” to respond to her (she obviously wasn’t his type), no activity was noted.  We moved across to where Danny Lehman was murdered and on request we did get a ball in the room activating and the EDI trigger.  It should be noted that this was the one and only time our equipment triggered all night.

Finally, we resorted to the good old ghost/spirit box, where we were clearly told several times to leave.  Radio or the residents telling us they had had enough? Either way, we decided it was indeed late, we would take their advice and get some much-needed sleep.

Whatever was causing these sounds, it was certainly exhilarating at the time and the haunted West Virginia Penitentiary certainly has become one of our favourite places to investigate.  The history alone is amazing never mind the paranormal happenings.  We felt it such an honour to be able to explore this very imposing building and we can’t wait to return! 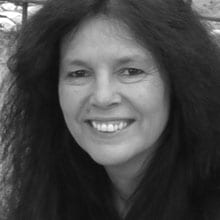