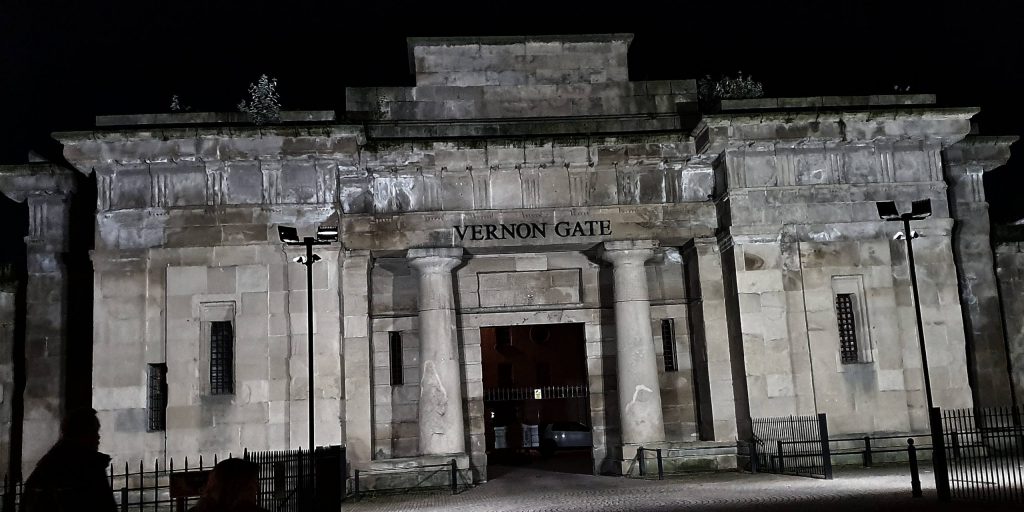 Vernon Gate Prison ghosts have been investigated for many years now, and we were given the opportunity to visit this historic prison for ourselves.  But what was the history behind what’s left of this historic Gaol?

After finally being granted permission to have their own Gaol, the Derbyshire town of Derby built the Cornmarket Gaol in 1652.  Before this, any criminals were escorted to Nottingham Castle.  Unfortunately, this Gaol was situated in the town centre and by 1756 they decided to move it to Nuns Green and named Friar Gate Prison.  It wasn’t long before this Gaol too, found itself being pressured by being in an area that was becoming popular.  More can be read about the early history of Derby Gaol, the executions and the ghosts in our previous Old Derby Gaol Ghosts blog.

Finally, in approximately 1827, the new Vernon Gate Prison was opened. It was a departure from the chaotic, overcrowded Friar Gate Prison.  This prison was built with 25ft walls and had 185 cells. It was designed with discipline and punishment through confinement, in mind.

Like the previous Friar Gate Gaol, Vernon Gate Prison also saw executions.  The first was John Leedham in 1833 but he also had the dubious honour of being the last person to be hanged for something other than murder.  He had been accused of Beastiality and paid the price in front of 6,000 spectators.  Until this hanging, there were nearly 200 offences that you could be executed for, including impersonating a Chelsea pensioner.  The last execution in Derbyshire was William Slack, who in 1907 was found guilty of murdering his lover in Chesterfield.  William was having an affair with Lucy, who was a barmaid at the local pub.  After an intense argument, he attacked her in the street as she was pushing her son in the pram.  He hacked her to death with a hatchet. He had already been in prison for attacking a police officer and his wife had left him due to his violent outbursts.  Slack ended his life at the end of a rope and became the last on a long list of executions in Derby.

Vernon Gate Prison finally closed its doors in 1916 and up until its demolition in 1929, was used as a military prison.  Before they could redevelop they did need to exhume the bodies of the executed that were buried in the grounds.  All that remains of the Prison now is the facade and the impressive entrance.

Again Denise and her husband, Richard, took us around and investigated with us.  We had split the night, with half investigating the old Friar Gate Gaol (Old Derby Gaol), and then bonus time here to search for the Vernon Gate Prison ghosts.  As we looked around they told us of the executions and deaths that occurred at this prison and then filled us in on what has been happening there.

They told of a little girl who had been seen, especially in the watchtower area.  Nobody knows who she is or why she is there, especially as it is a prison.  However, it was suggested that maybe it was the daughter of one of the guards or maybe she was from a time long before the Prison was built.  People have reported seeing her and also having their hands held by what felt like small hands. They have named her Emily.

Another presence is male and often is accompanied by a strong and unpleasant smell.  Denise described it as somebody’s smelly feet when they haven’t changed their socks for a very long time.  He has also been described as being slightly deformed with an almost hunched back. 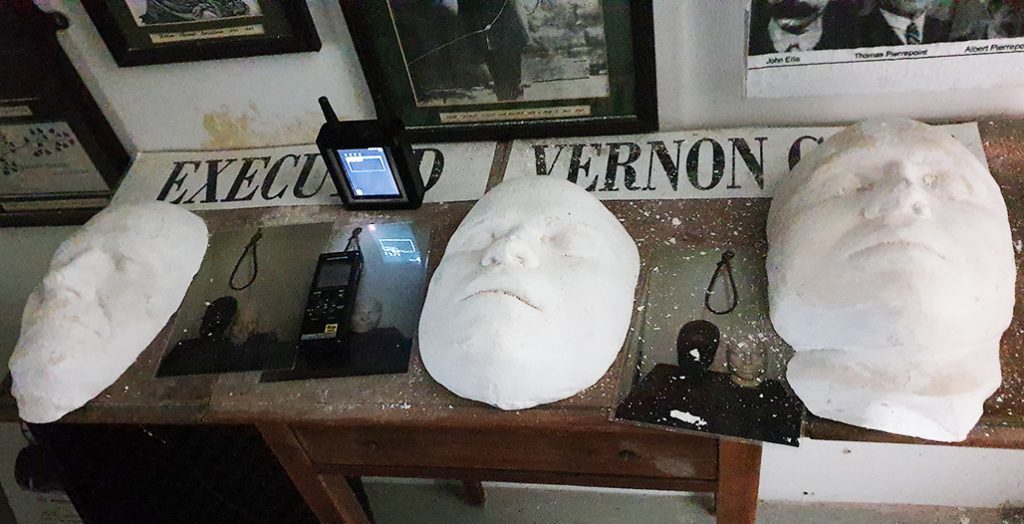 We started our investigation in the area where the condemned prisoner would be led out to the public gallows.  It is now a window but was once a door leading out. As Kag and I were discussing to our viewers where we were, the RemPod triggered.  This had been placed centrally in the window, and where we were standing is where the prisoner would have stood for the last time before going to his fate. Each time we mentioned executions, the Rempod would trigger.  As we chatted to whoever might be there, more equipment went off.  Interestingly, it was almost at the same time, including the Rempod, temperature and an air pressure change on the EDI (a device that has a range of sensors) and the EMF meters (Electro-Magnetic Field).  For a while, it seemed to be answering questions, before it all fell silent once more.

We moved on to the top of the tower.  After Denise finished telling us about what had been going on up there, the flashing cat ball triggered in the corner.  We did question whether this would have been the most exciting piece of equipment for a child to play with. It settled so we asked if there was anybody else there too and the ball triggered again before the EDI next to the ball indicated an air pressure change.

As Denise had never used a ghost box in the tower before, she was interested to see if anything would come through.  We fired it up, but with nothing startling coming out of it, we put Richard on the headphones for an Estes experiment instead. He was curious to see how it all worked, having not tried this before.  The first word that Richard called out was the name ‘Susie’ and we discussed if this could be the little girl’s real name.  He then came out with “come here” and as we asked where the EDI temperature triggered, as did the ball over in the far corner.  Assuming that this was where we were wanted, I offered to go into the corner as instructed.  As I commented on how much warmer it appeared in this corner, Richard shouted “Move!”, to which I did as I was told and instead invited Denise to go into the corner.  Denise moved into the corner and asked if this is where she was wanted, Richard followed up with “shut up!” to which Denise got a little feisty back!  After a little conversing Richard said the words “End” and “Enough” then when we asked for confirmation on this “Shut up!” came out again.  With that, it petered out.

This was an impromptu investigation that was kindly offered as an extra by Denise and Richard for us.  We were only here a short time and expected nothing much, however, we appeared to get more curious responses on the equipment and through the Estes than we did a short time earlier at Old Derby Gaol.

We would like to thank Richard Felix for allowing this visit and also Denise and Richard for hosting and joining us on the investigation.  They were so lovely, despite Denise not being well that night, but soldiering through for us.  Hopefully, we meet again when we next come back over.  Thank you also to the Vernon Gate Prison ghosts!

Watch the Paranormal Investigation Highlights Below