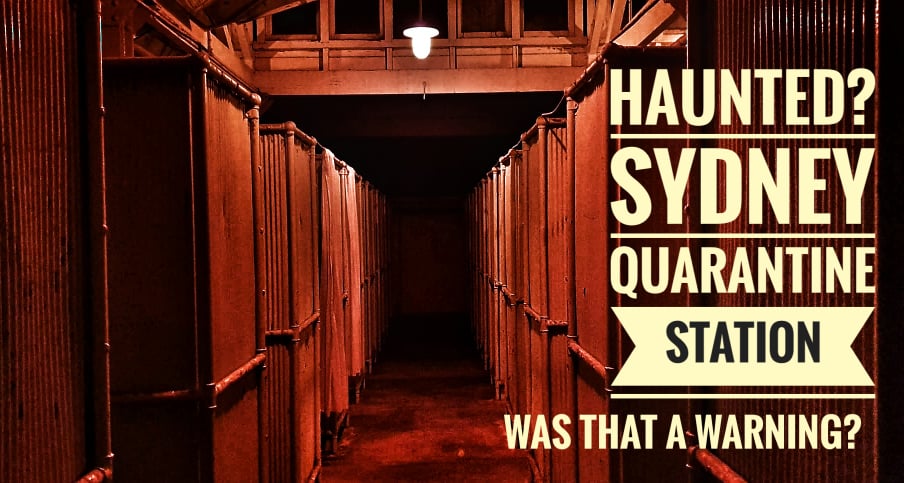 Sydney Quarantine Station ghosts, it has always been on my bucket list to investigate them, and now it was Kag’s and my opportunity to do so, as we had been staying in Sydney for a paranormal convention that weekend.

As European settlement grew, and more ships arrived including convict ships, it was decided that there needed to be some form of quarantine to stop infectious diseases from spreading, especially Cholera which had become a pandemic in Europe. So in 1832, the Quarantine Station opened its doors and continued to function until 1984, making it the longest-running Quarantine Station in the Country. During its operation, it contained diseases such as smallpox, typhus, measles, Scarlet fever and even the bubonic plague from getting out into the general population.  It also was the front line for returning WW1 soldiers who brought tuberculosis and even the Spanish flu back with them.  To help with the containment of these diseases, on arriving people would be showered and with carbolic acid and their luggage fumigated.  The ‘acid shower’ would have the effect that two or three days later the top 2 layers of the skin would peel off, like a sunburn.  It was thought that any bugs or disease just under the skin would be eliminated.

There are three cemeteries on site as it was recorded that 572 people died there.  However, Ross who was our host for the night, told us that they believe there may be as many as 4,000 people buried on-site as a lot of records prior to 1881 have been lost or destroyed.

The Quarantine Station is now known as the Q Station which offers beautiful and unique accommodation.  You can also dine there and they also run tours and paranormal investigations, so don’t forget to book one for yourself. 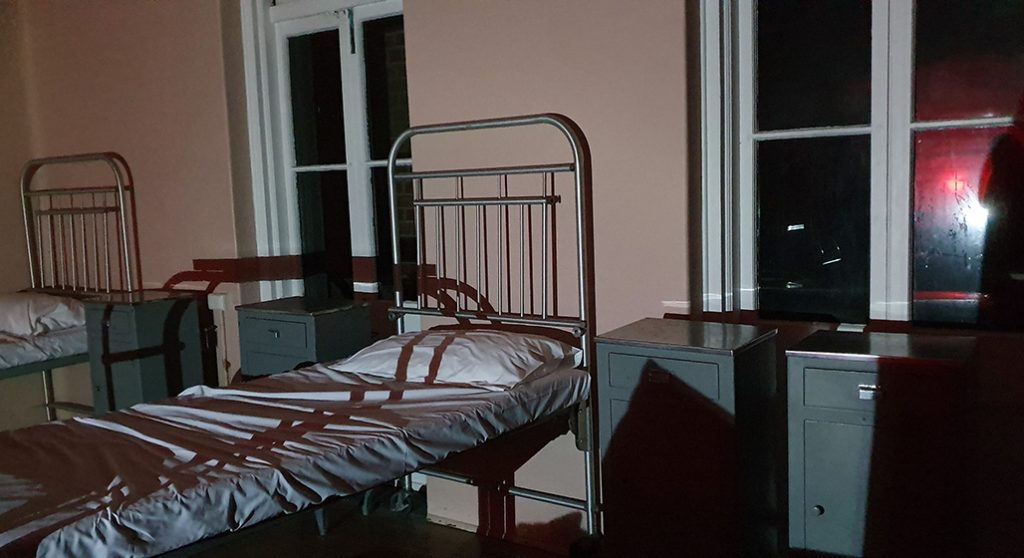 So who could the Sydney Quarantine Station ghosts be?  The oldest building on site is known as the Grave Diggers cottage, however, the name is misleading as they don’t believe the grave diggers would ever have stayed in this cottage.  They believe it would be more likely that the Quarantine Officers would have spent their time in this building.  Ross, our wonderful guide does tell us that there seems to be darker energy in there which is picked up regularly by guests visiting.  Ross believes there are two entities there that don’t like women, named Martin and Samuel.  It is common in one of the bedrooms for the drawers to open in the cupboards on their own and the wardrobe doors to open and hit people as they stand close by.

The Shower Block has also had activity reported.  A tall figure of a man and a little girl have been seen.  The little girl, aged around 6 years old, is heard to complain that she doesn’t want to get under the acid shower and who can blame her! Ross told us of a lady on his tour that nervously came to stand next to him. She said she was down at the end of the shower when she was touched and spinning around, thinking it was her friend, found nobody was near her.  Another girl came to him saying she felt boiling hot like she had been in a scalding shower so wanted to get out.  Once outside she felt fine.  They have no records of anybody having died in the shower block.

In the hospital, it is thought to be a Matron that is still looking after the ward but is not supposed to like people being disrespectful.  This seems to be similar to many hospitals that report the ghosts of grey nurses still on duty.  Two other nurses thought to make their presences known, are Nurse Elizabeth McGregor and Nurse Annie Egan, who had both lost their lives to Spanish Flu while tending to the sick.  They were very brave ladies, who knew the risks they were taking, yet still put their lives on the line to help those suffering from this virus. Nurse Elizabeth McGregor had served in WW1 and was buried with military honours.  When Nurse Egan returned, she volunteered to help the returned soldiers who were suffering from the Spanish Flu.  She caught the flu herself and died only six days later. Sadly, Annie Egan, who was Catholic, also volunteered and caught the dreaded disease too.  Knowing that she was dying, she pleaded with authorities to be allowed a priest to administer the last rites for her and the other Catholics there.  The request was refused by authorities who were worried that by the priest visiting and leaving, the flu would spread further to the community. 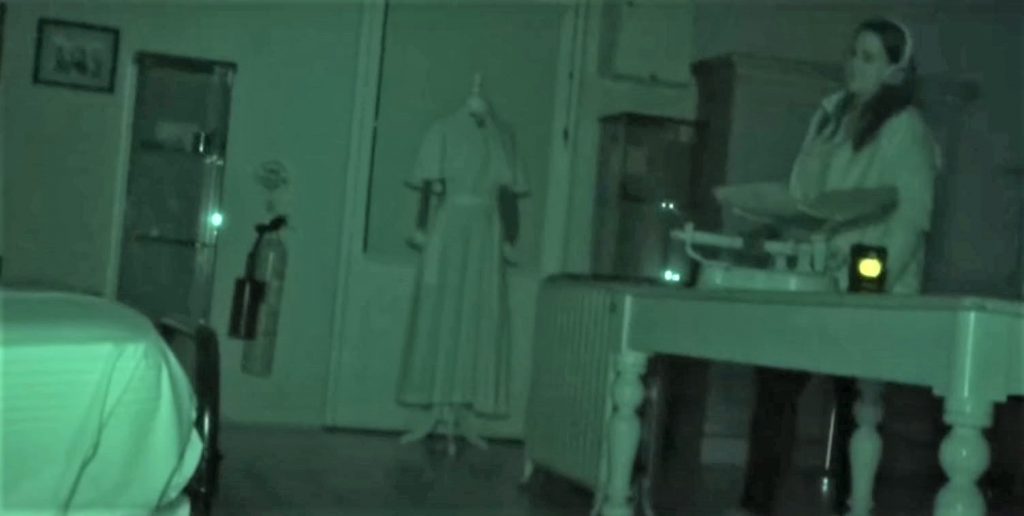 We started our investigation in the Grave Diggers cottage and on this occasion, Sharmaine Mansfield from Tasmania’s Most Haunted joined us in looking for the Quarantine Station Ghosts.

As we were setting the equipment up, the first two words to come out of the Ovilus was “Karen” (Kag’s real name) and “Moss”.  This has been my nickname for a greater part of my life. We introduced ourselves and started with an E.V.P. (Electronic Voice Phenomena) and on this occasion, we appeared to get lucky with a man’s voice appearing on the recording.  At this point, Ross had left us alone inside the building so there were only us three ladies in there.  Not only did we get the voice but one of our balls triggered when we started asking about the horrible things that may have been done there.

Next, I was put on the headphones for the Estes experiment (ghost box with headphones on).  Almost immediately I heard “Go Away” and then the name “Martin” came out.  When Kag and Sharmaine asked if he doesn’t like women in there, it spat out “Witch”.  At the same time I was feeling the floor vibrating, but strangely, almost like the floor was humming.  “Witches” came out again, when they asked whoever it was to light up the equipment.  Most of what was coming out was mainly “leave” and “Enough”.

We then moved to the Shower Block.  On asking if there was anybody there tonight could they let us know, the Ovilus immediately came out with “No”.  We decided to go with an Estes and sent Kag off down the hallway with the headset.  This is where it got interesting, although we didn’t know it at the time.  Kag came out with “Cameron” which is my son’s name and I commented on how I liked that name and why I gave it to my son.  Kag followed up quickly with “Mum” and then “Stomach”.  The next day I had a phone call from my husband to say that my son, Cameron had been rushed to hospital with appendicitis!  Was somebody giving me a warning of what was happening back home at that time?  Or here is a weirder question, could Cameron somehow have projected this himself while under anaesthetic or asleep? Final thought… coincidental radio?

Our final place was the hospital, where, upon introducing ourselves to the Matron, the flashing ball triggered on one of the beds.  Our EVP session revealed a couple of maybe’s, but not concrete, so we went to Estes and this time put Sharmaine on the headphones.  The first word that came out was “Anne” and this came out several times, remembering that at this stage we didn’t know about Annie Egan, Ross filled us in as we were getting responses.  After a few more relevant responses, it was sadly time to finish and our investigation looking for the Sydney Quarantine Station ghosts was at an end.

We would like to thank the Q Station, for allowing us this opportunity and Ross for being an amazing host.  We would also like to thank the Sydney Quarantine Station ghosts for tolerating us in their space too.

Watch the Highlights from our Investigation Below