The haunted Ragged School Museum sits in the heart of the East End of London.  Ragged Schools, or Free Schools, were charitable institutions that gave children of poverty-stricken families the opportunity for basic education.  This particular ragged school was the largest in London and was founded by Thomas Barnado. 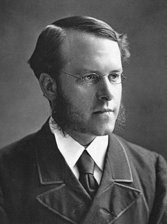 In 1866, Thomas arrived in London from Dublin to train as a doctor, but when he got there, he was greeted by great poverty and disease in the lower classes.  He also watched helplessly as a pandemic of cholera swept through the East End, killing 3,000 people and leaving so many families devastated.  In particular, his heart went out to the children, and he decided to continue with his missionary work and focus on helping these poor urchins.

In 1877 he finally opened his Ragged School in a block of warehouses after paying for a 21-year lease on two of them.  With 370-day children registering and a further 2,500 for his Sunday School, it soon became the biggest in London.  Each floor had a classroom and the basement served as a playground.

There were four paid teachers and six paid monitors to staff the school of children ranging in age.  It didn’t matter from what background, religion or race they came from, they were all welcomed at the Ragged School and had pupils from West India, Africa and America who attended.

The Copperfield Road Ragged School went on to help many children who would otherwise have perished or continued in a life of misery and poverty.  There were many success stories and some can be found here –  Children of the Ragged School

The School operated for around 30 years before closing its doors for good in 1908 as a school.  The Sunday School continued until 1915.  After this, the building had many industrial uses up until 1984.

In 1983, when the buildings were due to be demolished the Ragged School Trust was formed and they stepped in to protect the buildings and preserve them as a museum.  It now is a wonderful place to visit and learn about the history of Ragged Schools and the children that the schools helped. 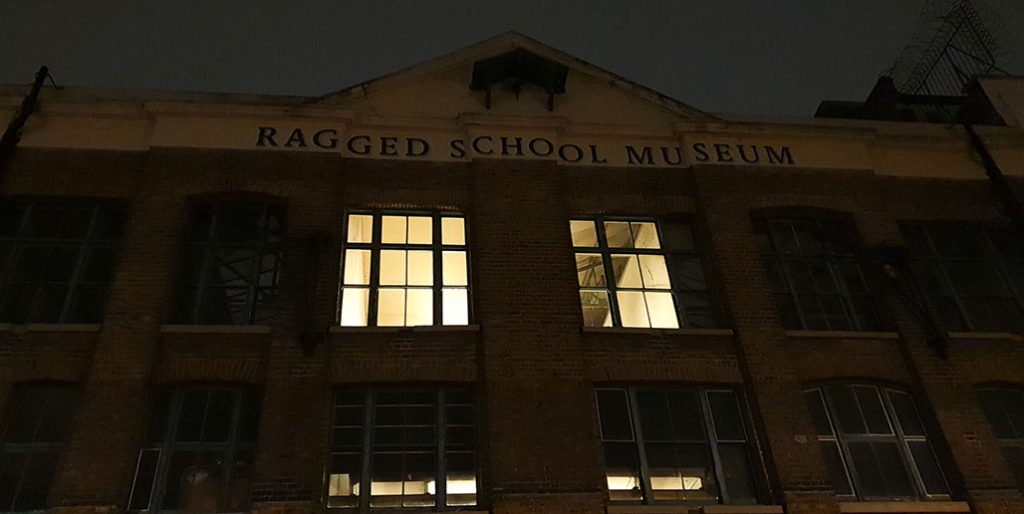 I had always been interested in this venue, ever since talking to Beth Darlington from Access Paranormal about her own strange experience there.  She told of how she watched a table, during a table tipping session, walk down a hallway with the people on it trying desperately to keep up.  As Beth is a very rational person and highly respected, I took great interest in this.  It was many more years before I finally managed to organise a visit to the haunted Ragged School Museum.

In July 2019 Kag, Craig and I managed to secure the Ragged School Museum for a private investigation.  We were greeted by our host for the night, who quickly showed us around and kindly told us some history of the place before leaving us to our own devices.  Strange things happened almost straight away.  As Kag and I were setting up in the basement (basecamp for the night), Craig had gone off exploring.  Soon he returned with a “what did you want?”  Kag and I looked at him blankly, so he continued “you called me”.  Again, we looked at him blankly and shook our heads.  He stated more hesitantly this time, that he clearly heard a female voice calling his name and assumed we wanted him back, so had cut his exploration short.

Excited now, we started in the upstairs area where a Victorian kitchen had been recreated.  We chose this as when walking around earlier while doing a live feed to our followers on Facebook, some of our watchers told us they heard a voice that wasn’t ours.

We laid out the equipment and started our investigation, and after hearing a few strange sounds we started an EVP session.  It was while listening back, the flashing cat ball to the side of me suddenly rolled off the chocolate bar we had placed it on.  These small balls are designed to flash if touched or moved which this certainly did, even causing a little expletive to come out of my mouth! The incident was made more interesting by the fact that the ball had been sitting for quite some time without wobbling or moving until I asked if anybody there could try and move the ball.  I followed that with a promise that if they could, I would leave them some chocolate.  We later asked through the ghost/spirit box if they had enjoyed chocolate in their day to which we had a swift response “Yes we did”.  After we got correct responses to how many of us there were and also to how many of us were male but then also being told that it was time to “turn it off” we moved on to another area of the Ragged School. 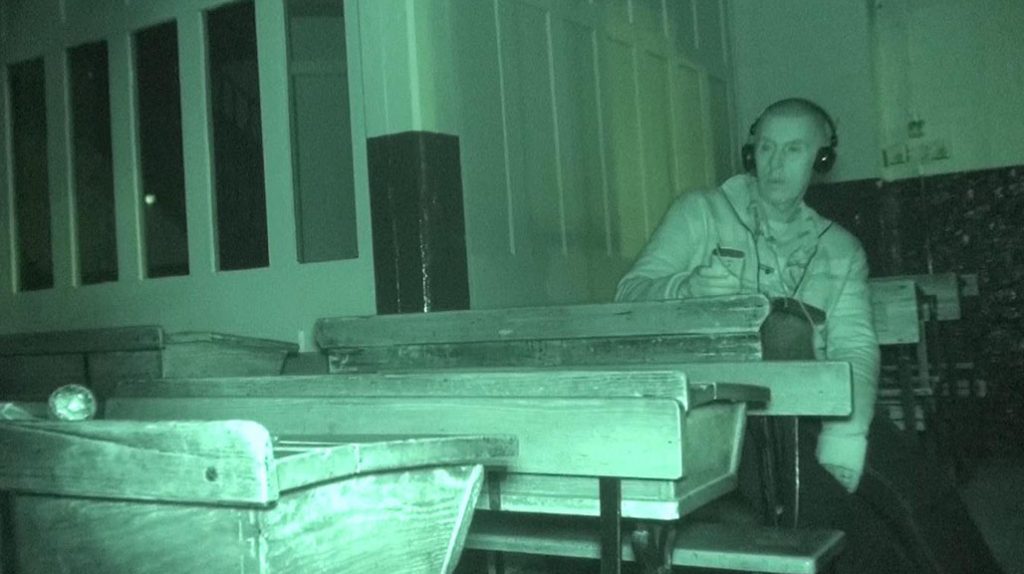 The next area was the recreated schoolroom.  And here the curious happenings and responses continued.

Again we invited anybody there (especially a child) to feel free to play with any of the equipment and let us know they were there.  Interestingly the only light to go off was yet another ball that we had placed on the bar of chocolate again. We were curious how it always seemed to be the ball connected to the chocolate, yet none of the others we had around the room.

We began with some roleplaying which meant Kag got to play a school teacher, with Craig and me being the students.  The teacher was to ask simple math questions while running the ghost/spirit box.  If the correct answer failed to come out, then each student, in turn, is caned.  It was a job I feel Kag enjoyed way too much!

The first sum was answered correctly, however, Kag failed to hear it (or chose not to) and Craig was caned anyway.  Out of the box appeared to be ‘ow ow’.   Upon my turn, no answer was forthcoming but instead “too hard” and then a clear child saying “please miss”.  I too received the cane!

We moved on to the headphone experiment instead.  This is where one member of the team wears noise-cancelling headphones plugged into the ghost/spirit box so they can’t hear what questions are being asked.  The reason for this is that we believe often our brains will search for answers that we think we should be hearing when we know the questions.  This helps to eliminate this problem.  This is where it became a lot more interesting.

Craig wore the headphones first and appeared to give relevant answers to our questions.  He came out with children and ages before stating “They are watching” almost as if whoever the child was that we may have had talking to us, was concerned about others.

I then donned the headphones. We were doing this live on Haunted Horizons Patreon Page for our subscribers, so when I finally took them off I felt extremely guilty.  I assumed I had fallen asleep, as I was by this point exhausted.  The first thing I thought was oh no, I didn’t listen and call out when our guests were watching and waiting. Apparently, this was not the case.

On the video, I shut my eyes so I could focus on the words coming out, and then shortly after, I put my hands around my throat and said ‘strangle’.  Interestingly out of the Ovilus came the words ‘blind and cord’.  My team asked who was strangled and I came out with “let them know”.  The Ovilus also spat out children, starved, several.  Meanwhile, Kag and Craig were discussing my weird behaviour.  Craig asked if I used to sew as he felt we were getting responses from an adult, not a child.  I raised my hands as if I was about to play the piano after giving Craig a strange look.  Craig asked another question and I spat out ‘Amateur’… Craig paused and asked “are you talking to me?” and at this point, I woke up and took off my headphones.  I hesitantly ask if I said anything relevant thinking they were going to chastise me for not saying much at all.  They then told me what happened. 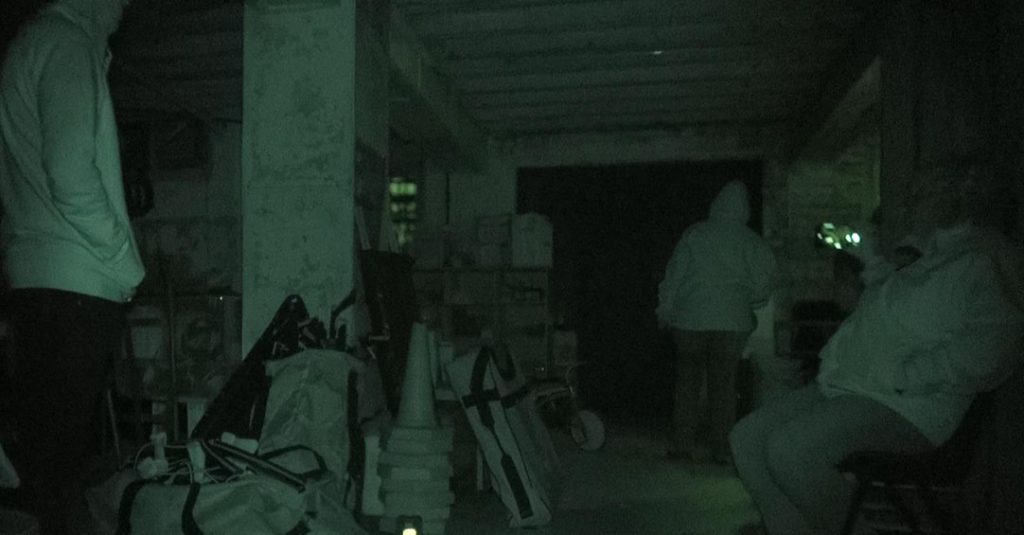 Moving to our last place in the Ragged School we settled in the basement, where we set up once more.  It was here that the responses changed somewhat.  Instead of being playful and innocent, we seemed to get a lot of swearing mainly telling Craig to F#@* Off.  I think he wins my award again this year for the most times a ghost has told a guide where to go!  He appears to win this every year!

We decided to call it a night, but not before I saw the shadow of a person move across the door.  At first, I thought Craig had moved behind me and I was seeing his reflection as that is how it looked, but he was still to the side of me.  It also dawned on me the door wasn’t glass and a reflection was impossible.  However, by this point, we were close to exhaustion and we still had a long drive back through London which is not an easy task and so we said goodbye to a most intriguing piece of London history.

Thank you to the Ragged School Museum for allowing us this time in your amazing museum.

For the full happenings and responses please watch the video below.
Please note:  Because the ghost box/spirit box is controversial due to the nature of where the responses are coming from (it is a broken radio), then it can not be seen as evidence of the dead talking to us.  We put that part forward for your entertainment only and for you to make your own judgement.  The responses were curious nonetheless.

To learn more about them head to their website: Ragged School Museum

Alison has extensively researched the paranormal for over 30 years both in Australia and overseas.  She runs her research team Paranormal Field Investigators and owns Adelaide’s Haunted Horizons.