Charleville Castle Ghosts, are they real?  Who are they and why are they still there?  Kag and I were kindly given permission to visit and see if we could communicate with whoever remains in this beautiful castle.

Charleville Castle is located in County Offaly in Ireland and sits in amongst one of Ireland’s most ancient Oak woods.  Charleville Castle began in 1798 when the first Earl of Charleville, Charles William Bury, drew up some sketches, which were improved upon by his talented wife.  The first foundation stone was laid in 1800 and Charleville was completed 12-14 years later.  It is a wonderful example of neo-gothic architecture.

Throughout its history, Charleville Castle did experience periods of not being lived in, often due to a lack of direct family heirs.  When this happened it passed to the closest family members, one being lady Emily, a niece who inherited it in 1885.  She changed her name to Howard-Bury to comply with certain terms and the Bury name continued although, the title of Earl did not.  The last Charleville Earl was Alfred who passed away in the 1830s.  The final Bury at Charleville was Colonel Charles Kenneth Howard-Bury, who was her son.  He became well known in his own right, being a notable explorer and botanist who was the leader of the first expedition, which in 1920/21, climbed Mount Everest.

After Colonel Charles Howard-Bury passed away in 1963, no more interest was given to the castle and with nobody living there, it deteriorated eventually being classified as a ruin.  Even the roof was removed to avoid the local property taxes.  Finally, in the 1970s a group of people made a move to try and restore and protect the castle and so, in 1994, the Charleville Castle Heritage Trust was set up to continue the work of restoration.  At present, it is managed by Dudley Stewart with a team of volunteers who are doing a fantastic job and the castle is now starting to come back to its former glory.

Charleville castle has been featured in many T.V. shows including ‘Becoming Jane’, ‘Northanger Abbey’ and the ‘Green Knight’.  It is better known among us paranormal investigators for being featured in ‘Most Haunted’ and ‘Scariest Places on Earth’. 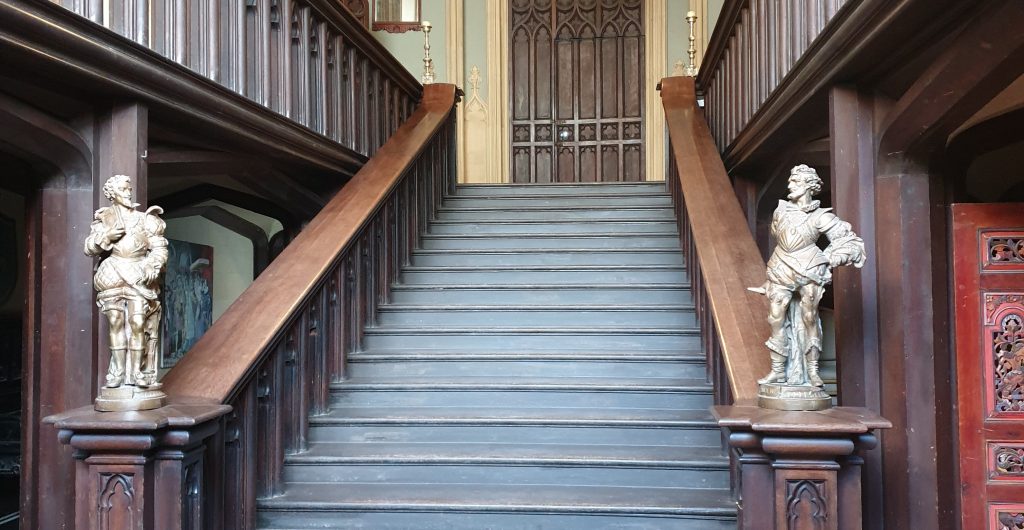 One of the best known Charleville Castle ghosts is Lady Harriot  Bury, 2nd daughter of the 3rd Earl of Charleville. On 3rd April 1861, Lady Harriot then 8 years old, was playing in the library with her younger siblings, John and Emily.  The Governess sent Harriot up to the nursery to wash her hands.  The nursery was located on the top floor.  Harriot this day was unsupervised, and on her way back down the stairs, thought it would be good fun to slide down the bannister.  She sadly overbalanced and fell to her death.  She is has been reported many times with visitors witnessing and talking to her.

The list of the Charleville Castle ghosts also includes Lady Harriot’s Uncle, Henry Walter. Henry died at the young age of 7 from Influenza.  Although he died in London the first Countess brought his body home to Ireland and he is now buried in the family vault. The volunteers at Charleville, describe Henry and Harriet as the terrible twins as these spirits seem to be very mischievous as children often are.  Interestingly our wonderful guide from Darcy’s Paranormal Society – Ireland, Sam, showed us her photograph which was really intriguing as it did seem to show a shadowy little boy in it.

The library seemed to be a big focus too for activity.  This was very much a male domain in its day and has a secret tunnel leading out to the chapel and an underground room.  Sam had her big experience there on her own first investigation.  They witnessed a dark shadowy form on the ground come out of the small door which blew her away, and she signed up to be a volunteer there shortly after.  It was also a reminder to us that it wasn’t only children ghosts that we would be dealing with in Charleville. 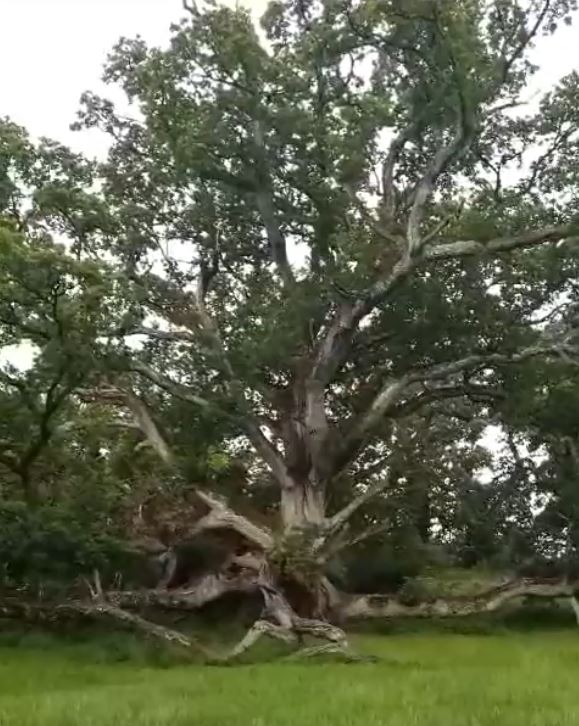 One of the most intriguing stories we were told, was not so much about the Charleville Castle ghosts, but about an Oak Tree in this ancient wood.  Kag and I had already noticed how weird this tree looked as we drove up to the Castle.  We found out when we arrived, that it is known as the ‘King Oak’.  It is believed that this tree is over 900 years old.  The story goes that just before a male member of the Bury family is about to die, the tree either drops a branch or gets struck by lightning, which is why it is such an odd shape today.  Nobody knows why this happens or whether the family is cursed or not.  The first Earl died on 31st October (Halloween) in a slightly unusual way, as he passed out in his soup.  The servants at first thought he was napping until they realised that he had indeed passed away. We were told how other Earls went on to die at a relatively young age. The last time the King Oak was said to have been struck by lightning, was in 1963, just before the last Bury associated with Charleville passed away.

There have been no more Bury’s in residence since 1963.

After our tour around this amazing piece of history, it was time to begin our search for the Charleville Castle ghosts. Kag and I thought we would start the investigation together and invited Sam to join us. We started the investigation, but in the beginning, we were unable to film.  It was a shame as when we tried to connect with Harriet, the Rempod appeared to be answering questions.  We were sitting chatting and at one point we told Harriot that we also had a little boy in one of our own venues called Sydney and gave his age of 3.  In response, the Rempod (a device that sets up its own field and triggers if broken) blipped 3 times.  We asked if they could count and if they could do it just once more to show us they could, and it responded as requested.  So, as promised we left a flashing cat ball behind for Harriot to play with.   We were told later by Sam, that the girls who worked there watched the ball rolling down the stairs on one occasion and even had it thrown at them.  On checking it, the battery was flat so maybe they were being told that Harriot missed the flashy lights!

Next, we all set up at the bottom of the stairs and again the equipment seemed to trigger in response to particular questions.  While focusing on the stairs, Kag and I kept getting drawn down the hallway to the library so I suggested to Kag that maybe she put the Rempod there.  It wasn’t long before the Rempod went off in the doorway, backed up at the same time by a ball flashing on the stairs.  Samantha told us that Harriet although falling to the floor at the bottom of the stairs, was still alive for a short while and had been taken into the library, where she sadly passed away.  I asked if it was Harriet and the Rempod and ball triggered straight away.  We also appeared to get a voice on our recording saying ‘Hello’.

At the same time, all this was happening, I felt the temperature drop quite dramatically around me.  I found I was shivering uncontrollably as I became increasingly cold to the point where I couldn’t hold the camera steady.  Neither Sam nor Kag were feeling this cold.

Another strange occurrence was when we heard, what we thought was a phone ringing.  It turned out not to be a phone, but instead, was the front doorbell.  Nobody was there and the gates had been locked so nobody could get to the front door.  We have been told since that this was a one-off as it has not happened in the 2 years since our visit.

Soon it was time for me to do a lone vigil in the Library.  Sam was concerned and warned me this was not a room to be trifled with, especially after her own experience.  As we stood there, the Ovilus said ‘huge’ ‘safe’.  Apparently, those two words made sense when Sam told us that below where we were standing was a huge, heavy safe in the room below.  And so I was left on my own in the room.  I have to say that it felt very uncomfortable and edgy at first and I found myself standing with my back hard up against the wall.  It certainly didn’t feel childlike in there and I had the feeling that I was intruding and not welcome.  As I chatted to whoever could be in the room and explained who I was and why I was there, the atmosphere noticeably lifted, so much so that I felt myself relaxing and moving away from the wall.

Meanwhile, Kag was in another room, but mainly it was quiet for her apart from the ball flashing a couple of times to her questions, so she decided to join me in the library.  As we were running out of time, we did a quick ghost box session, to which all we got really were words that indicated that our time was up and we should now leave.  To which we thanked them and started to pack up.

The Charleville Castle ghosts are certainly intriguing and we would love to go back to this amazing place one day to explore further.  Until that day comes, we would like to thank Doug, Bonnie and the Charleville Castle Heritage Trust for allowing us this opportunity and for the warm Irish hospitality that we received.  Thank you also to Sam for being the most amazing host, it was such a pleasure to work with a fellow investigator from across the world in Ireland.  Hopefully, it won’t be the last time that we meet!

Charleville Castle will always be one of our favourite places in Ireland to investigate, and we encourage you to support and visit yourself especially as the money does go back to restoring this important piece of history.

Watch the Video on the Paranormal Investigation Below