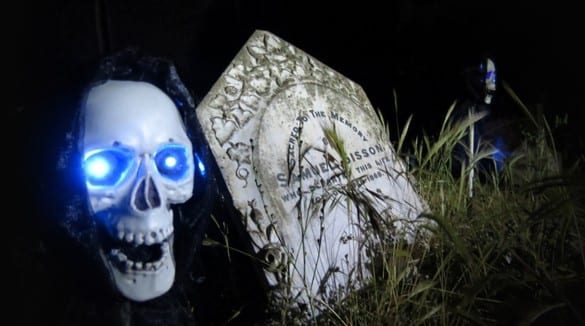 Well, it was a bit of an on again off again effort but I decided last minute to attend the Halloween tour at old Tailem Town run by Alison Oborn and the team at Adelaide Haunted Horizons. Unfortunately, I didn’t get to dress up like the team and other guests due to my wife falling ill and needing to be hospitalised in the preceding week. My costume was 300 km back in Kadina. When I got to Old Tailem Town I felt a bit like Brad from the Rocky Horror Picture Show! Dropped into Tailem bend BP service station for some caffeine to get me through the night (the investigation wasn’t finishing till 2 am in the morning!) Only to be greeted by a smiling ghoul that I immediately recognised as Linley my Facebook friend and her husband Simon. I knew it was her despite the makeup! Must have been the cheesy grin!

I followed them back to Old Tailem Town where we were met by Alison as the gatekeeper. Very Egor like! Well, the team resembled the after-effects of the post-Christmas sales with skin hanging off and blood oozing everywhere… I won’t mention the smell!! But that may have just been Simon…he did look a wee bit bilious! Anyway, If you want to see gruesome stand around a BBQ while the ghoulish Anna slaps raw steak down on the plate…I couldn’t help wondering if this was an unlucky customer that didn’t quite finish the last tour!!

Not long after watching the sacrificial meat ritual the rest of the tour group rocked up in suitably scary attire. With all the blood around a vampire would have been in heaven (if that’s not an oxymoron…..actually I think I saw an oxymoron too!) I digress..as the sun slowly sank casting suitably eerie shadows across the streets of Old Tailem Town we set off on our tour….that is, after waiting for the girls (who looked scarier than anything ethereal they may have encountered but wouldn’t go to the loo on their own) to catch up! The first stop was some old railway carriages and in particular, three windows where a figure has been seen passing along the carriage. A haunting story told by the ever-entertaining Alison and suitably eyes wide teenagers with the usual antics and screams and then it was time for some pics. I got nothing on my camera but one of the kids had trouble with “Static” lines on his and then when one lad stood by the train he got a blue streak through his picture.

We moved onto the House converted into a Pub which was the town owner’s idea of a joke as the previous owner of the house was known to be very anti-drink. This turned out to be the most active location of the night. Perhaps the previous owner was a little peeved off at the joke! Immediately I stood at the bar I heard in my right ear a whisper that sounded pretty much like “Get out!” now I’m fully aware I have a very vivid imagination but it was quite distinct and there was no one on that side of me. Alison had purposely not told anyone of the things that happened in the house so we couldn’t be swayed. I then walked into the front lounge room which was empty at the time and as soon as I stepped through the double door I felt a cold tingling down my back and what felt like a clammy cold hand on the right side of the back of my neck in a stroking sensation. Perhaps a cold breeze? Not sure. When I told Alison she smiled and said this happens often to men who walk into that room. The next interesting thing that happened here was when I tried to take a picture looking down the hall a saw a white figure flit past on the viewfinder just as I pressed the button but nothing came up in the picture. A similar thing was to happen later on the tour.

Moving on Alison told us the tale of the dark shadow figure often seen around the town (She had seen it personally a number of times. Often he was found in the church but seemed free to wander the whole town. They had nicknamed him Ted after a violent swaggy that died in the vicinity. We went on to look at other sites and I must admit I phased out a bit on all the tales which seemed to be keeping the teenagers mesmerised as I was more interested in taking photos in dark places to see if anything popped up. Another interesting experience was at the old “Peake” railway siding that is haunted by a dead ticket master. The whole group was together listening to Alison when noises were heard around the side of the building. Then there was a metallic thump like someone had thrown a rock hard against the side of the little shed next door. No one in our party had moved so it couldn’t have been any of them. I can’t rule out however that one of the other staff wasn’t playing a Halloween trick but they were nowhere nearby at the time. I took an interesting picture here down the side of an old freight carriage with a couple of anomalies that seemed to fit with stories being told.

Moving on I took a couple of photos at the old mechanic shop which showed some less convincing anomalies, one possibility of a shadow person but could also have been just the form of an old plough and other shadows as it was right at the edge of the limit of the flash. Remember I talked about The white figure on my viewfinder screen, well this time I was taking a picture of some old cars and for some reason, I got the brief picture on my screen of what looked like Alison or a figure in black walking in front of the cars on a completely different angle to where I was pointing the camera. It wasn’t a reflection because it was really on the screen and almost like a daylight picture. As soon as it was there it was gone again and I blinked and thought it was just a trick of the light or something. We moved on to a couple of little houses with haunting attached but I got no real feelings apart from a couple of cold spots. 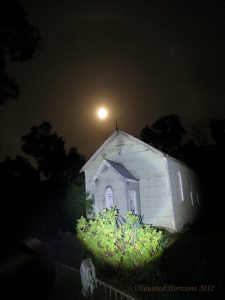 After heart rates settled we headed over to the old Wolseley church That is usually a hot spot for activity but tonight it was remarkably quiet. The stories, however, were suitably chilling and the Halloween trimmings including the freaky punk-like dummy of a girl gave a spooky atmosphere. One young fella complained of becoming really cold despite the warmer temperature of the church.

After the church, those of us staying on for the investigation went and had a cuppa while the others listened to some Electronic Voice Phenomena recorded in the church. Now it was time for a bit of hardcore ghost research…the bit I had most been looking forward to. I was keen to see what equipment was used and how it worked.

We started in the Old church but it was particularly quiet and if anything had quite a nice peaceful feel to it. After a half-hour or so we decided to move back to the pub. Well immediately I sat in the armchair in the front room I felt light-headed and tingly. I believe you should feel the fear and do it anyway so I relaxed into it and the sensation started to subside. (I have this little trick of imagining white light around myself as protection and love energy…. don’t know if it works but it certainly comforts me!) As we sat in the quiet I heard footsteps come up the passage. All of the team were in the front room. Linley must have heard it too and because she was in a position to see down the passage she asked if we could swap places. It was the same passage I tried to photograph and saw the white form on my viewfinder. For a brief moment as I sat in Linley’s chair the KT (?) meter I was holding (designed to pick up electromagnetic energy and light up) spiked with a bright green light. It must have picked up on something! It went quiet for a while and then we decided to wander through to the back bathroom where supposedly a guy had suicided in the bath. We asked questions and the light meter seemed to respond with random flashes. We seem to pick up on something. On returning to the front lounge where the “Ghost Box” had been set up (The ghost box is a kind of transistor radio that cycles through stations like a constantly moving scanner to pick up spirit responses to questions) We all introduced ourselves to any possible spirit hanging around and got the response that sounded like “F….Off” Anna told us that they always get abusive language in this house and that the spirit it quite arrogant and rude. Remembering this is the house/pub that I was told to “Get Out”. Questions were asked and seemingly responses were heard …often sounding abusive. And some names were given including my own. This continued until it was time to pack up and Alison and will join us after packing up all the Halloween props.

It was a great night and a nice distraction for me after what had been a difficult week. It was great to finally meet Alison, Linley, Simon, Will and Anna after seeing their work on the net for so long. They are a great bunch and nice genuine people who take a realistic approach to their investigations. Question everything and look hard for alternative answers because most “events” can be debunked….but there are just enough of the “undebunkable” ones to keep them researching which is great for all of us with an interest in understanding the paranormal!

Thanks, Guys for a great night!

For other Tours and Dates – Book Now