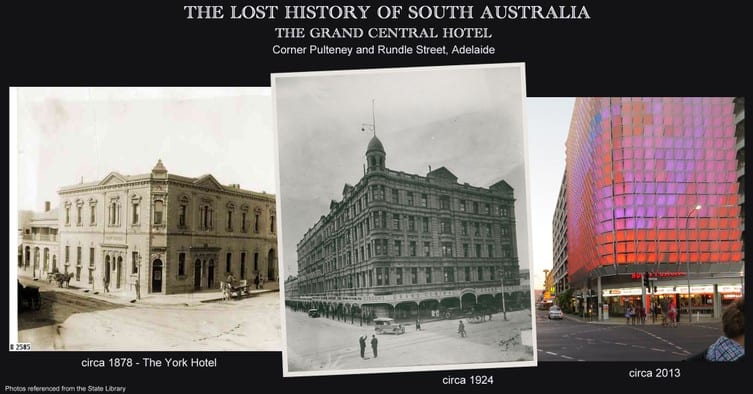 The Grand Central Hotel: Its beginnings 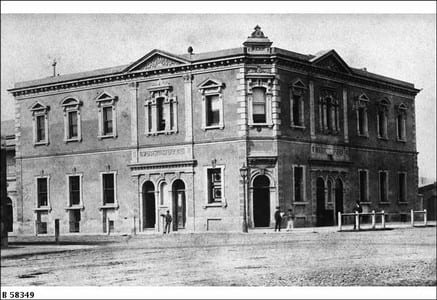 As people stand in line at Hungry Jacks waiting for their burger or as they lock their cars just having parked in the multi-storey car park above, they would probably be surprised to learn of what stood there before, as prior to 1976 there stood a magnificent 5 storey building called The Grand Central Hotel… a Hotel that was hailed to have once been one of the best Hotels in the Commonwealth.

However, it should also be remembered that this wasn’t the first Hotel that stood on this busy corner, for there was another Hotel long before the Grand Central.
Its name was the York Hotel and it had been erected on this site within one year of the founding of Adelaide. Over the years following changes were made to it but it quickly established a reputation of being one of the more high-class establishments in Adelaide. It attracted many well to do patrons who not only stayed in the Hotel temporarily, but some actually made this Hotel their home. The hotel prospered until 1909 when the lease ran out and the lease was quickly picked up by William Gibson of drapers Foy and Gibson. With the lease safely in his hands, William Gibson set to work on their new plan… the demolition of the York Hotel to make way for a grander five-storey structure. The height was carefully chosen to correspond with the height of their store on the opposite corner known as Foy and Gibson. The two buildings certainly were similar and complimented each other as they stood adjacent on each corner.

In 1911 The Grand Central Hotel was completed and immediately gained the same high reputation as the York Hotel before it. The Grand Central Hotel boasted many luxuries that the former did not and it certainly continued to appeal to the well to do patrons. It even had a winter garden room where you could relax with a pot of tea while sitting amid exotic ferns and listening to a live string orchestra playing. The dining room was said to be able to fit 600 people which again would indicate the popularity of the Hotel.

It even boasted having a couple of famous people stay in its rooms both as The York Hotel and The Grand Central. Names such as Arthur Conan-Doyle who stayed in 1920 when he paid a visit to Adelaide was one well-known identity. Mark Twain and the Prince of Wales were two others. As the York Hotel, it accommodated another famous guest, Dame Nellie Melba, Australia’s first celebrity who became one of the most famous singers of the time. She was also the first Australian singer to achieve international recognition.

These Hotels also saw their fair share of tragedy starting with the York Hotel. At least two men, one only 22 years old decided to kill themselves whilst staying there. One of the saddest was Dr Griffith Jones who had been the medical practitioner in charge of the Magill orphanage. He was found one night in 1884 having asphyxiated himself in bed with the use of chloroform. He had been fearful of being disgraced after Ophthalmia had broken out in the orphanage and it was feared that 4 children would lose their sight. At the inquest, it was stated that no blame had ever been laid on Dr Jones they felt he had done all he could and still had a bright future ahead of him. However, depression can be a terrible thing and it took the life of what was a fine doctor. This tragedy was followed 9 years later by 22-year-old Joseph Durrell who shot himself in the head whilst staying in one of the Hotel’s rooms.

The Grand Central once built was also not immune to tragedy and just 6 years after opening, another guest… a young man of 23 shot himself in the head in his hotel room. Tragedy, however, did not just befall the guests it also dogged the staff too with the shooting being preceded by the death of a 24-year-old cook who got his head stuck in the elevator after he had, what no doubt seemed like a bright idea at the time, put his head through an opening in the partition supposedly to watch the lift coming up. Sadly for Otto, the lift was actually descending and he paid the consequence for his mistake. Just five years later a porter hanged himself in the parklands on the eve of his own wedding. In fact, even William Gibson JR, the younger partner of Foy and Gibson died mysteriously and suddenly in 1918. He died in the flat of an actress and when questioned, his wife admitted that Gibson did frequently take opium tablets and this was thought to have been what killed him.

THE END OF AN ERA

For such a new and well respected Hotel which had attracted such well-known identities of the time, it did not prosper as well as the owners would have liked and a decision was made by the directors of Foy and Gibson to close the hotel down only 13 years after it was built. It was said by Foy and Gibson that they now needed the extra room for the expansion of the business. Although the bar was kept for a short time after and the residents moved out gradually, the Hotel was officially closed in 1924.

The Grand Central Hotel continued to trade under the name of Cox-Foys (mainly known as Foys) until it’s closure and demolition in 1975/76 to make way for a multi-storey car park. One can’t imagine what was going through the minds of the people who made this decision. Adelaide certainly lost a fabulous part of her history and now gone can never be replaced.

Do you love history?  Check out our Dark History Tours