The Golden Fleece Hotel ghost is one of the most intriguing pub ghost stories in South Australia.  Many would remember the Golden Fleece Hotel in Gawler by its previous name, The Old Spot Hotel.  I remember it well due to a current affair show in the late 1980s running a segment on the ghost that was reported to still reside there.  It had even featured on my Gawler Dark History Tour for many years both for history and the haunting there.

Some could not understand why the Hotel would want to change its name to the Golden Fleece, but in fact, this was its original name when it was first built.  The present owners were merely restoring the original title.

The first proprietor, David Scheibener, built the Golden Fleece in the fledgling days of the Town of Gawler, the oldest country town in South Australia.  In 1839, it was the first building to go up on what is now the main road through the town, Murray Street. However, the name Golden Fleece was only short-lived and by 1848 it had already changed its name to the Old Spot Hotel, which it remained as until 2014 when the Hotel went through renovations.

Gawler had prospered as a town and was especially important once copper had been discovered in Kapunda and Burra.  Gawler became a crucial resting stop for the bullockies that were transporting the copper back to Adelaide.  The Golden Fleece was a place they could find food, drink and accommodation. 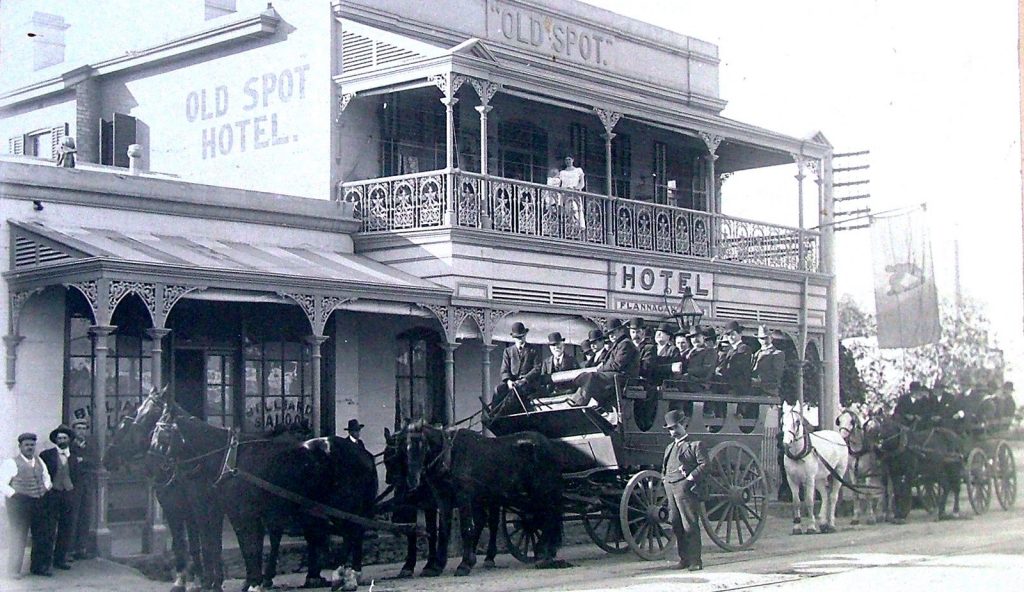 In the late 1980’s a current affair show ran a story about the then Old Spot Hotel in Gawler (Video available below).  It interviewed Scott Pearson who had taken an unusual photograph on his 35mm camera.  Once I started researching for the Gawler Dark History tours, I tracked Scott down and was lucky to get an interview with him.  Scott described how his brother had bought the Hotel and everything was fine until he started to do some renovations.  His brother opened up to him about strange things that were happening which got Scott’s attention as he knew his brother was a sceptic. His brother told how the kids, who were under 10, were starting to wake up suddenly only to find somebody in their room.  Other witnesses reported seeing an old man and a young girl.  About the same time, some of the cleaning staff didn’t want to work there anymore, especially as one of them had just had a sighting in the laundry she was working in. 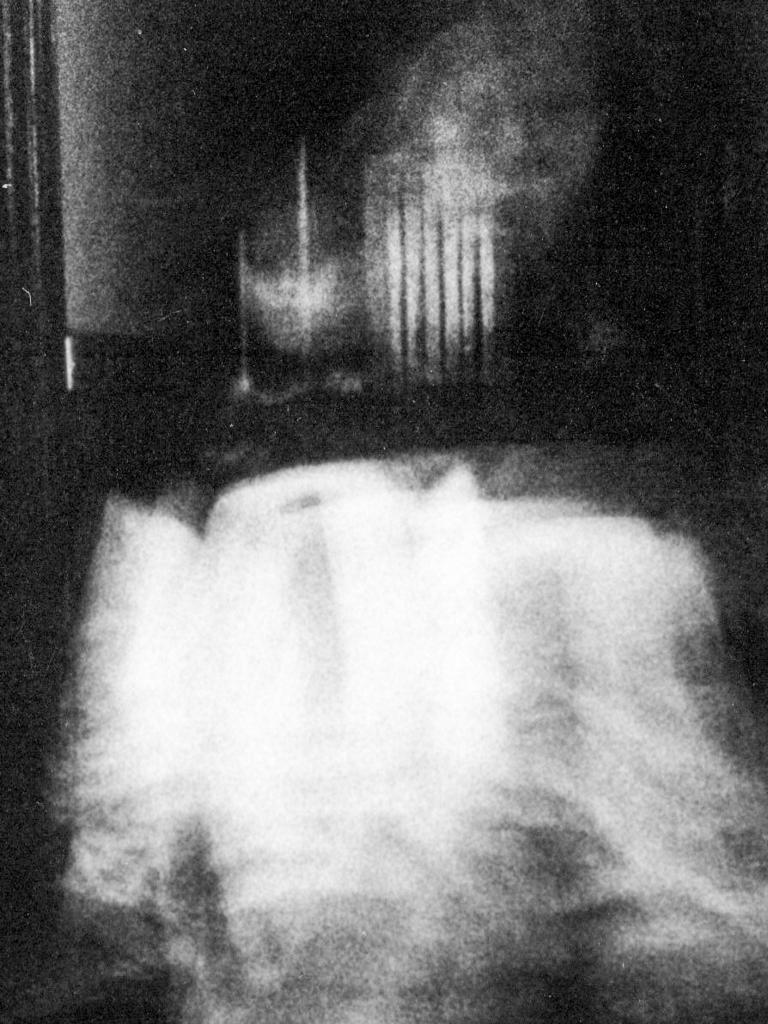 The fact that his brother had been a sceptic, intrigued Scott so, being a keen photographer, offered to come in one evening to take some photographs.  His belief was, that if people are seeing ghosts with the naked eye, then surely the camera could capture them too.  Scott experimented with speeds and many types of film including infrared but got nothing.  It wasn’t until he used a high-speed black and white roll of film, that something strange was captured.  He wasn’t aware of it at the time but it would appear he had caught the Golden Fleece Hotel Ghost.

He had been up all night taking shots down the hallway towards the kitchen and returned home putting the rolls to one side to check later as he assumed like before he would have nothing on them.  It wasn’t until he was checking through the negatives that he noticed what looked like strange marks on one of them.  He quickly enlarged it and started to freak out as there on the photo was what looked like two faces, a man and a young girl.

In the interview, Scott goes into more detail on the type of film used, speed etc.  He said he certainly didn’t expect to find anything on the film, especially as the other rolls had proved useless.

But it didn’t stop with Scott and his brother.  On interviewing the present staff there, it became apparent that strange things were still happening, especially upstairs where renovations haven’t taken place.  Again reports were coming in of clear sightings of a young girl and a man.  One room, in particular, was unnerving to some of the staff.

So it was we were invited in to do an ‘On the Road’ live stream investigation for our Facebook page.  For those unaware, these particular investigations are not only to try and capture any paranormal activity in these places but to help promote tourism/hospitality venues in our unique way.  After all, tourism needs all the help it can get at the moment!

And so it was we set up in search of the Golden Fleece Hotel Ghost.  We started on the top floor in the front left room.  The upstairs still maintains its old original look which was very different to the modern feel downstairs.  We placed various bits of equipment around the room with alcohol, toys and cigarettes as trigger objects but the equipment did not measure any unusual readings or activity.  We tried an E.V.P (Electronic Voice Phenomena – voices on recordings not heard at the time) burst which also left us with nothing.  With the ghost box/portal we appeared to get a name out when we asked for one, which was “Anna”.  We did get a couple of relevant answers on the Estes Experiment (ghost box with headphones), including somebody telling me personally to get out!

I then moved to the small front room upstairs where people had reported feeling uncomfortable and settled myself facing the large mirror.  I requested that if anybody was in the room with me if they could let me know by triggering the equipment around me but the equipment remained quiet.  It was only when I was about to say “if you would like a drink could you light the ball up on the beer” that the flashing ball I had on a bottle of beer started to flash wildly.  Strange as I had thought the question but it hadn’t left my lips at that point.  The question would be… coincidence or do spirits/ghosts hear thoughts too?  No other equipment went off after this curious happening, not even the ball again.

With nothing much else happening in the room, I rejoined Kag and the ladies where it was decided that we could go down into the cellar to do a short session.  Struggling our way down (Kag and I are not getting any younger!), we found ourselves looking at the original foundations with what looked like tunnels leading off that had been blocked up now.  Again E.V.P. produced nothing, but the Estes gave a few curious answers including from a child and a man telling us “My wife is dead”.

It should be remembered that the ghost box is a broken radio, so extremely controversial.  Many people believe that it is just random radio that we see as answers to our questions.  The Estes experiment is a little more interesting as the headphone wearer can’t hear the questions thus taking away any bias.  But at the end of the day, it should be remembered that these words are coming out of a broken radio, so we can’t prove it was a ghost.  Although some of the responses were extremely well-timed!

Although we had nothing earthshaking happen, it was certainly a curious night and such an honour to be spending time in the oldest Hotel in Gawler, something I have been wanting to do for many years now.

I would like to thank Julie and James for trusting us to visit and Sami for approaching the Golden Fleece and helping it to happen.  Don’t forget to call into the Golden Fleece Hotel yourself, as the meals are amazing as are the staff.  You will even find Scott Pearson’s photo on the wall and I am sure they will tell you a few stories.

For more articles like this go to Our Paranormal Blogs