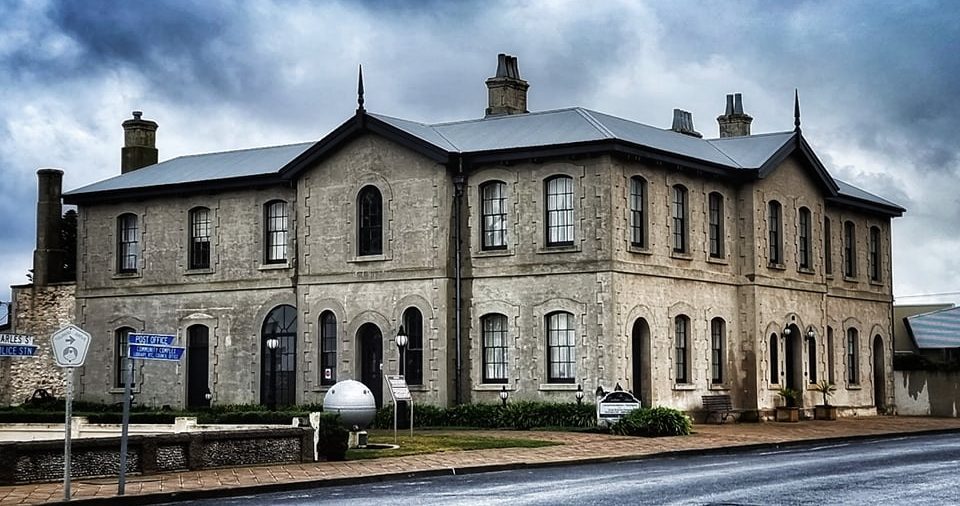 Customs House Ghosts, in Port MacDonnell, are there any?  It certainly has that look about it, but just because the building is historic and looks like it could be haunted doesn’t always mean that it has ghosts.  We were given the unique opportunity of being the first to find out!

As the interior of South Australia, such as Mount Gambier grew, there was also a need for a port as transporting goods overland was slow and expensive.  The area of Port MacDonnell was chosen and officially declared a port in 1860.  It also grew to become the States second-busiest port on what was by far the most dangerous stretch of coast.  A number of wrecks attested to this and by 1858 the Cape Northumberland lighthouse was built to try and guide them and in 1863 they had their own lifeboat shed, which went on to save many lives.

As the Port became busier and the revenue from customs became second only to Port Adelaide, a Customs House was needed, so in 1862/63 this grand building was completed.  Not only did it house the offices but sections were also used as the Court House, Post Office and even a school teachers residence.  It also held the Police Station and residence until 1958, and the old prison cells can still be seen today.

Slowly, over time, the port became less busy and more recently, tourism has started to grow.  The Customs House has had many different owners since shutting in 1958 with several different uses from private residences to restaurants.  Today it is a luxury Bed and Breakfast accommodation where you can stay in unique apartments either in the Police Residence or the old Post Office section.  Both, although renovated, still hold on to the unique feel of this building where the perfect blend of modern-day comfort meets the historic which is meticulously maintained throughout.

Customs House Ghosts – Are There Any?

When we arrived, we really had no idea if it was haunted or not, as we hadn’t heard any stories.  The owner, Emma and her husband were very honest and admitted that they had no idea either, as they had not personally experienced anything in the 10 years they had been living there.  The only stories they knew of were from guests, one of which had been packing to leave, up in the bedroom.  She couldn’t find a couple of her personal items so went downstairs to see if her friend had seen them.  When her friend said she hadn’t, the girl returned upstairs only to find those belongings lying neatly on her case.  People also report that in the Post Office Apartment, the figure of a young girl is seen at the window.

Another story is from guests who reported that they had woken up in a different part of the apartment.  They found themselves downstairs when they knew they had been upstairs in bed.  As Emma says, she can’t say whether it is something, or if they were maybe sleepwalking.

We did have a quick search through the old newspapers, but we were unable to find any obvious deaths in this building.  However, maybe a longer search might reveal one or two.

In Search of the Ghosts

Since we had booked in to stay the night anyway, we thought we would go ‘fishing’ for any of the Customs House ghosts, if any.  We were curious and so was Emma to see if we would get a bite from anything paranormal.

We started in the living room and placed all our equipment out.  We thought we would start with an E.V.P. burst (Electronic Voice Phenomena) and then listen back to see if we captured anything.  All was quiet with no extra voices heard.  There was even less from the ghost box/portal which was very noisy and hard to listen to this night.  We decided to move on to the Estes experiment (ghost box with headphones), and we did seem to get a couple of curious responses.  The words “Rose”, “4th” “boat”, “deep”, “float”, “Crystal”, “both dead”, “people, connect” came out in quick succession.  Could it be connected with one of the wrecks or was it just a random coincidence?

Next, I moved to one of the outside prison cells to do a lone vigil.  There was nothing on the E.V.P. burst, so I moved on to the portal.  It repeated the word ‘Deep’ which had come out in the previous session, but then the following words were mainly “leave” and “back off”, with the clearest being “I told you to leave!”.

The Customs House ghosts… are there any there?  An honest answer would be that we don’t know.  There were certainly some curious answers, and the messages of “leave” out in the prison cell were very definite and repeated numerous times.  All we can say is we had a wonderful stay in the Police Residence apartment.  The owners are so friendly, the place is spotless and the beds were some of the most comfortable that I have slept in (I even asked for the mattress make from Emma).  We had a blissful night sleep totally undisturbed by any ghostly activity.  We look forward to returning in the future, and next time staying in the Post Office Apartment.

Watch the Video of our Paranormal Investigation

Customs House B&B can be found at 3 Charles St, Port Macdonnell.
Website – The Customs House
Check out their Facebook Page