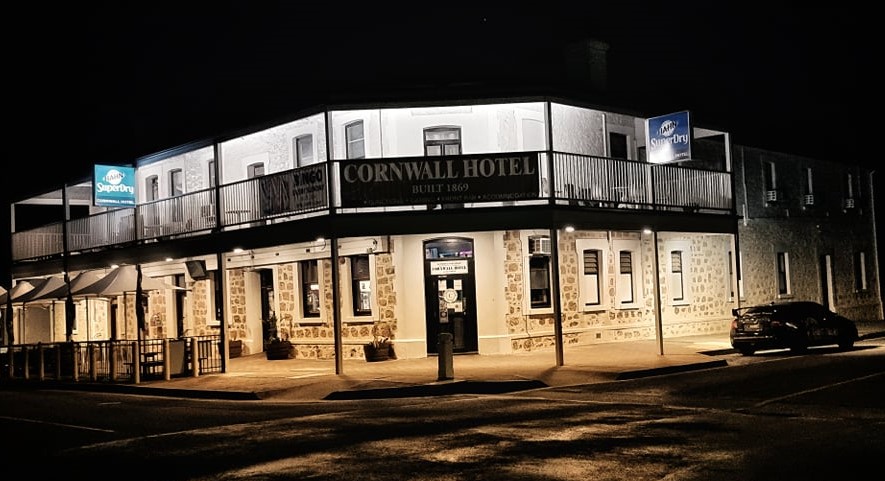 The Cornwall Hotel ghosts have long been spoken of, but what is the history behind this haunted pub and are the stories just tales told at the bar?  We looked into the history and went to find out for ourselves

The Cornwall Hotel sits in the heart of Moonta, which was once an important copper mining town.  The town is now a beautiful seaside tourist destination, full of history and friendly locals.  However, if you were to visit the cemetery, you would see that this town did see its fair share of tragedy.  Black markers sit on various graves to indicate those lost in mining accidents, but even sadder is a whole section devoid of headstones, but instead, there are rows of small mounds of dirt.  These are the graves of well over 300 children who were lost through epidemics of typhoid, diphtheria, cholera and even measles, that swept through the community and it was the Cornwall Hotel’s cool cellar that became important to store some of those little bodies.

Moonta was also famous (or infamous) for being the home of the only woman we ever hanged in South Australia, Elizabeth Woolcock.  She lived in a small cottage with her husband Thomas and his son. However, due to abuse that she suffered before and during her marriage, Elizabeth was accused of poisoning her husband, found guilty and hanged at the Adelaide Gaol.

The Cornwall Hotel was originally built in 1862 as the Globe Hotel and is now one of the three remaining pubs in Moonta.  It was a popular drinking place in town.  In March 1889, the Globe Hotel burned down, fortunately with no loss of life.  All that remained was the original foundations and the kitchen.  It was quickly rebuilt and continues to be popular today.  In more recent times, it changed its name to the Cornwall Hotel.

The Cornwall Hotel Ghosts and Deaths

Many stories of the Cornwall Hotel ghosts centre around the basement and Room 6.5.  In the basement, which was used as a morgue for the children who passed away from disease, it is reported that children have been heard and even a young girl has been witnessed.  For this reason, toys are left with the intention of making them feel comfortable and welcome.  These toys have been reported to move and we were told how a young girl, who was related to the licensee, had gone down into the basement only to see one of these toys levitate.  A male presence is also experienced down there, who is said to be grumpy, but they believe he is only there to look after the children.  Often investigators are told to leave the basement.

Upstairs, the Cornwall Hotel ghosts are just as active, with staff hearing children running up and down the hallway.  The main focus, however, is room 6.5 which we were staying in for 2 nights.  A young man, Leslie Ferguson had sadly passed away in this room in 1928.  He was a soldier who had returned from WWI but after his return, he became very sick, so he left his wife and children to stay with his parents who owned the Cornwall Hotel.  It was thought that the fresh sea air would help him through his sickness. Sadly, he had cancer and his condition deteriorated until he finally passed away his room.

The television in room 6.5, is said to commonly turn on by itself and although we never witnessed this happening during our stay, our friends, Amy and Jarrad from Amy’s Crypt, had it happen to them twice.  David told us how plugs suddenly became unplugged when there was nobody there to do this, and things were frequently moved in the room.

There was another death that could account for the Cornwall Hotel ghosts and that was Thomas Senior who was an Ostler at the Hotel in 1888.  He had been attending to the horses, as usual, and afterwards retired to his room in the Hotel.  He was found to be deceased a short time later.  It was thought that he had overstrained himself and his heart had given out.  We did indeed get the name Thomas at one point out of our equipment. 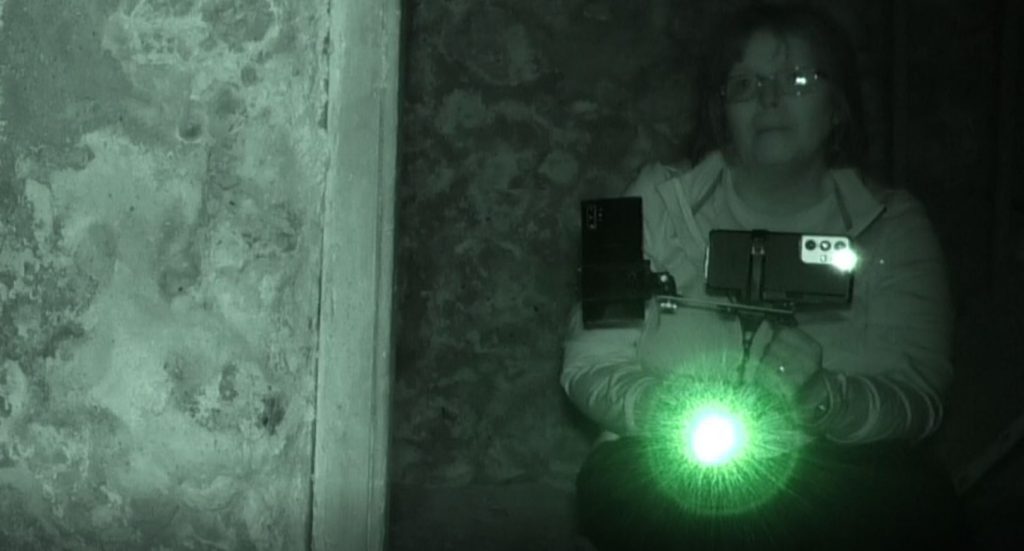 In Search of the Cornwall Hotel Ghosts

Kag and I were lucky to be invited to investigate several locations in Moonta, and the Cornwall Hotel was on that list.  After the lovely Sandy, a local paranormal investigator, had taken us on a tour around the Hotel, I settled myself down in the basement on my own for a lone vigil.  Trying E.V.P. (electronic voice phenomena) first, I got nothing that would indicate anybody was talking.  It was the same with the ghost box/portal so I called Kag down to do an Estes experiment (ghost box with headphones so that questions can’t be heard).  The main responses from this session were the classic “out” and “leave” which is consistent with what other investigators have been told to do.  Apart from the words ‘soldier’ and ‘Kelly’ (who worked at the Hotel), there was nothing seemingly wanting to talk to us in the basement.

We moved up to Room 6.5 and while I was setting up the equipment on my own, it sounded like something was thrown in the room.  I searched for what it was but couldn’t find the source of anything obvious.  Naturally, there was no camera recording when this happened.

Once we started the session, within minutes we had the static meter and ball go off.  So we tried for E.V.P. to see if anybody wanted to talk without any results.  Again we tried to portal, but interference was great and all we appeared to get was one word, ‘Leave’.  I pointed out we couldn’t as we were staying there the night and no more words were heard.  Finally, we put Kag back on the headphones and again there were a couple of curious words but nothing mind-blowing.

It was after we finished filming, and were about to relax, that Kag and I watched a pen fly off the table… frustratingly after all the cameras had been turned off!

As we always remind people, just because we had nothing startling happen, it doesn’t mean a location isn’t haunted.  Any haunted location can be quiet on any given night and it would appear that we just hit one of these nights.  The Cornwall Hotel ghosts weren’t overly communicative, although the two incidents of objects being thrown were very curious indeed.

We can say though, that we had a comfortable two nights stay at this hotel, with undisturbed sleep.  Whatever is at the Cornwall Hotel certainly isn’t threatening but from the reports appears often playful.  We thank Sandy Hilbert for inviting us to investigate in Moonta, David the Manager for allowing us this opportunity and the Cornwall Hotel ghosts for giving us just enough to keep it interesting, but not enough to keep us awake!

Watch the Highlights from our Paranormal Investigation here