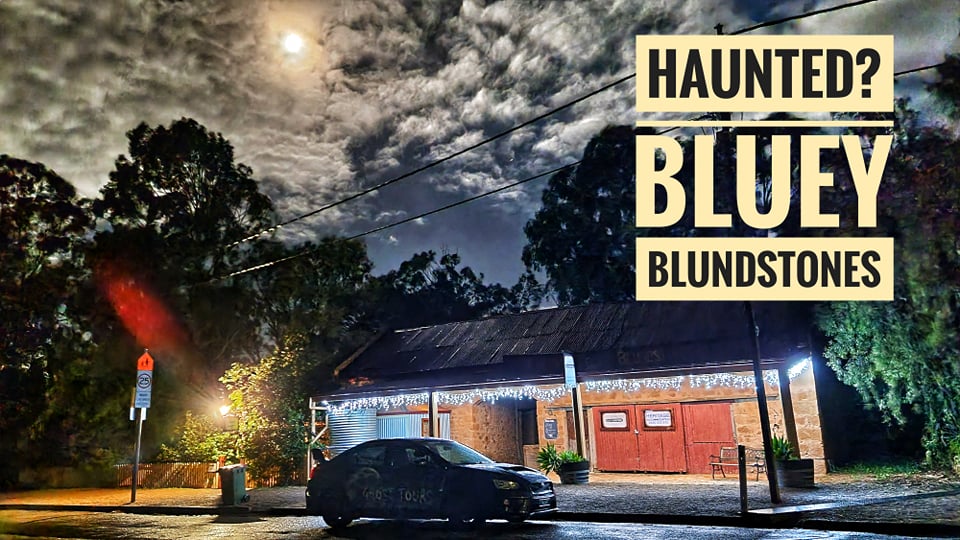 I have been very aware of the Bluey Blundstones ghosts for many years, since I paid my first visit there when travelling back to Adelaide from the Flinders Ranges.  I had stopped in Melrose for a leg stretch and an afternoon tea at what looked to be a curious piece of history. While there, I got talking to the then owners, about some of the strange things they had experienced.   It has recently been sold and Bluey’s new owners, Luke Bayley and Lydia Owen, contacted me to see if Kag and I would like to explore the ghost stories there.  Luke and Lydia bought Blueys only 4-5 months ago (to date of writing this) and they strongly believe that Blueys chose them.

Bluey Blundstones Heritage Accommodation sits in the heart of Melrose, which is the oldest town in the Southern Flinders and is approximately 3hrs from Adelaide.  The town sits at the foot of Mount Remarkable giving it a very scenic background. 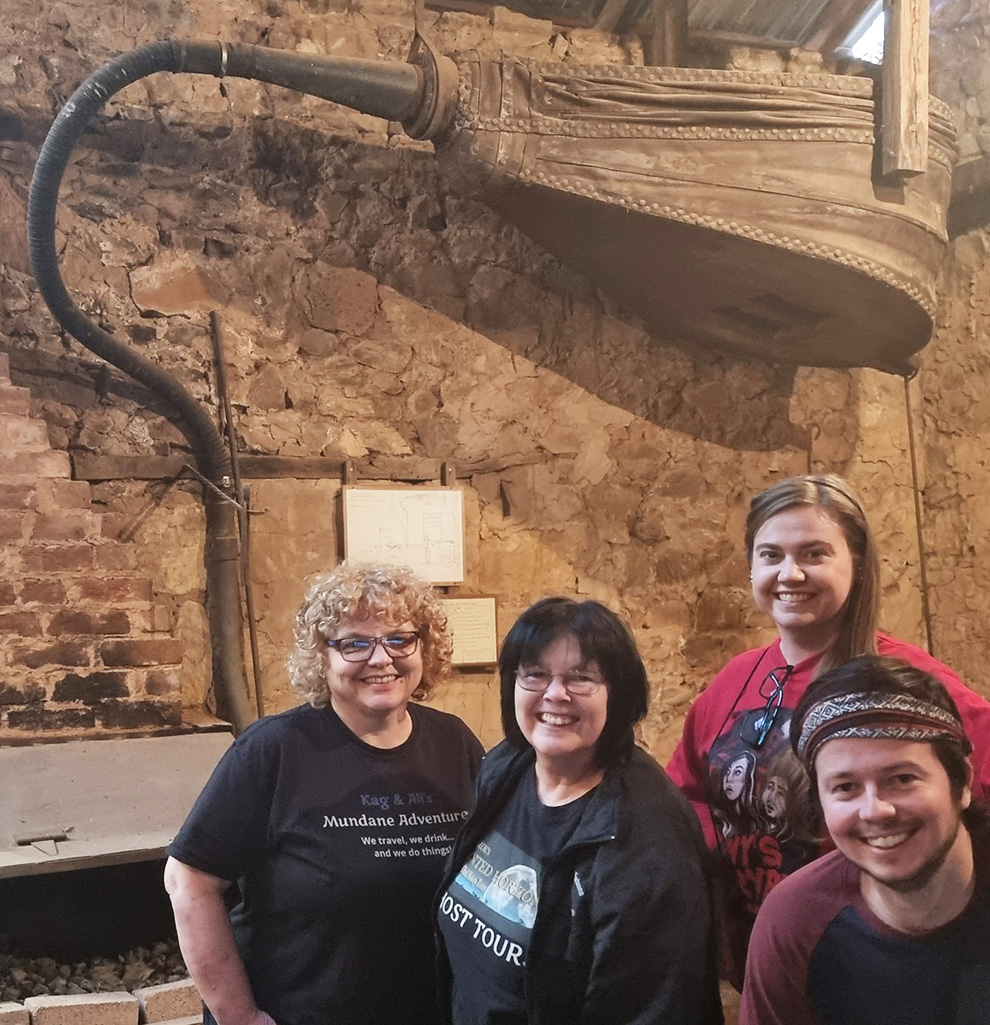 It was originally built in 1864 by William ‘Bluey’ Blundstone and his wife Martha, as a Blacksmiths shop and home.  Built out of pug and pine, the walls are still original and add to the amazing historical atmosphere of the place. Pug is a mixture of grasses, hay and lime which acts like putty between the pine posts.

The original blacksmith shop is still as it was, complete with the giant bellows, thought to be made out of elephant skin, which is still in its original position near the ceiling.  The floor is made from redwood timber blocks, designed to be softer for the horses’ hooves.  Bluey Blundstone shod a lot of the police horses from the police station across the road, which is now the Melrose Heritage Museum and we were lucky to be invited to investigate there too.  Although the large bellows don’t work anymore the forge is still operational.

Bluey Blundstones now offers quality and unique heritage accommodation.  Details of where to find them are posted at the bottom of this blog.

Who are the Bluey Blundstones ghosts and why are they still there?  I was staying in the oldest part of the building named the Loft.  Luke told me how they had a psychic stay in there one night, and she told of how she was woken up by a young girl aged around 12-13 yrs old.  She was sitting in a chair in the corner of the room and was very distressed, as she wanted to know why people were in her house and why they weren’t talking to her. The psychic also picked up on a young toddler around 3 years old. Luke and Lydia went on to tell of how they were sleeping up in the loft themselves one night when they first moved in.  Lydia woke up to pressure on her feet, like a cat moving around on the bed, but when she looked there was nothing there.  Lydia now wonders if it was this toddler.

Bluey and his wife Martha, who built the blacksmiths shop, had come from Derby in England and sadly lost a 6-month-old child on the journey over.  They also lost two more children once they had settled in Melrose.  Times were tough for children back then, and Julia-Anne passed away at 6 months old, while young Frederick passed at 3 years.  They are buried next door in the old cemetery.  The cemetery has since been moved out of town, but some of the bodies were left behind, Julie-Anne and Frederick being two of those.  There are no markers now to show where they now lie.  The cemetery is now a lovely, peaceful space for the public to sit or play, and is now named Paradise Park.

They went on to tell us about the previous owner who had used the adjoining little bedroom for his office.  One day he felt somebody move past him and despite being rather sceptical himself, still quickly told it to go away.  Another lady rented the same little room and said she felt that there was a female that was warm and welcoming in there.  Lydia and Luke are convinced that it is Blueys wife Martha, who is still around.  When they first stayed there, both of them were sitting on the lounge in the Loft, which meant they could see through the little bedroom and the door beyond that.  While they were watching, under the gap in the door, they noticed somebody moving around in the kitchen when nobody was there.  They invited them to come in and talk to them, and they suddenly felt the energy strongly with them.  Through their own equipment, they confirmed it was Martha and she was more than happy for them to be there.

One of the Bluey Blundstones ghosts does appear to be male.  One night Luke was cooking steak in the communal kitchen and it was getting smokey so the fire alarm triggered and he heard a man shouting “Oy, oy, what are you doing!” but when he looked around there was nobody to be seen.  Luke said it was so clear and in his face, that he even went outside to see who it was, thinking somebody was yelling at him from out there, but again there was nobody to be seen.  Maybe Bluey is still keeping an eye on the place too.

It was now time to search for the Bluey Blundstones ghosts.  As we were being taken around by Luke, Kag joined us and mentioned that when she was setting up, she could hear the music box going off from the blacksmith’s shop area. She had placed it here earlier and interestingly it was around the same time that I was live-streaming outside and was hearing banging noises coming from behind the door. We decided the Blacksmiths shop was probably a good place to start our investigation.

After introducing ourselves, and explaining what the lights around the room were for, we began.  However, with nothing responding on the equipment, we decided to do an E.V.P. burst (voices on recordings you don’t hear at the time).  We may have captured a small whisper but inconclusive, so we moved over to the Estes experiment (ghost box with headphones).  Luke went on the headphones and one of the first words out was “Blueys”.  Although mostly there were random words after this, occasionally one would be more curious, like when we asked who the child was and it came out straight away with ‘Mary’.  When we asked if they were happy there, Luke came out with “yep”.   He also came out with “Rope” to which Amy from Amy’s Crypt (she dropped in to say hello), pointed out that there was a rope next to her which she had been watching swaying for the last few minutes.  We seemed to have a little more success when we put Lydia on the headphones, especially when we said goodnight and Lydia followed up with a very well timed “Night Night”.

We then moved over to where I was staying in the Loft. We appeared to have a little more equipment action here, including on the E.D.I. (Environmental Detection Instrument), which has a range of sensors in it that were alerting us to a change in temperature and air pressure.  Strangely, as we began an E.V.P. session, I asked whoever was there to “talk into the box with the orange light”.  I meant the voice recorder, but suddenly the portal which was sitting close by started to emanate a strange interference noise, something we have never heard this do before.  We did discuss afterwards whether whoever was there may have thought we meant this box, as it too has a small red/orange light on it.

The Ghost Box/Portal came out with a couple of curious responses, including mummy twice which was the same time a flashing ball triggered next to Lydia.  We wondered if the child saw Lydia as a mother figure and was drawn to her. We then moved to the Estes where we were given the classic ‘leave’ and ‘get out’.  When we asked who it was, coincidentally, GhostTube spat out ‘Blacksmith’.  Very fitting for where we were!  For us personally, what was most interesting, was when we turned the cameras off and started packing up.  A flashing catball that had been sitting all this time on a cupboard suddenly flew off and sailed across the room, but always the way!

During our stay there, we never felt or experienced anything bad.  It seemed very homely and whoever may still be around, was friendly.  We cannot recommend this place enough for your accommodation needs if you are ever in Melrose.  You will not find friendlier hosts and the place is just stunning.

We would like to thank Lydia and Luke, once more, for inviting us and giving us this opportunity to reach out to the Bluey Blundstone Ghosts.

In Search of the Blueys Blundstones Ghosts

The video below is a tour around Bluey Blundstones, with the history, ghost stories and our investigation.  It gives you a great insight into this amazing place to stay.