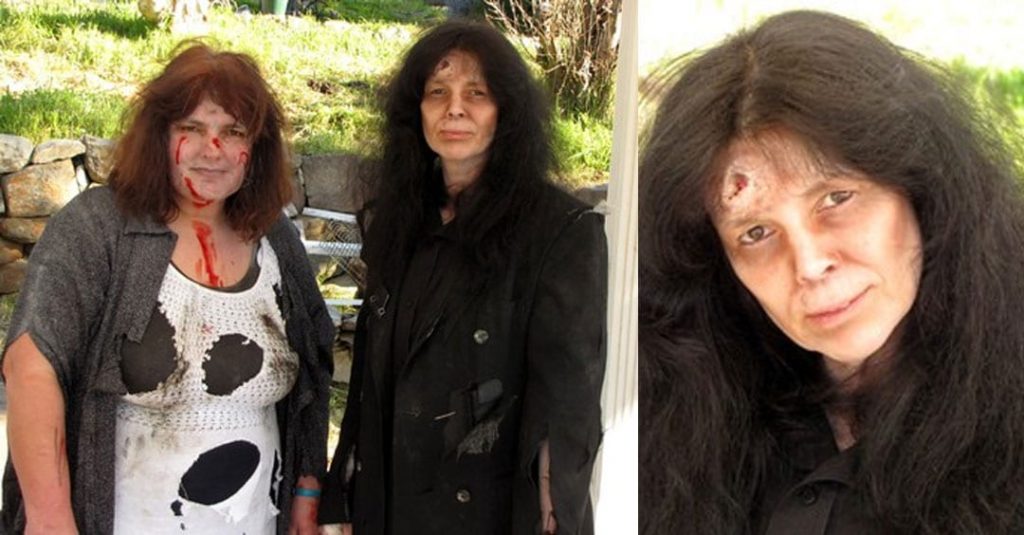 “Wow, have you done something with your hair?” Was one witty comment from a team member on the photograph I recently put up on Facebook. As I was made up like a corpse, it is reassuring to see my team members can’t tell the difference!! It had been decided that this year I would wander down to the Adelaide Zombie walk, a charity event held here each year, and even make that extra effort and try and dress myself up as a Zombie. And what better to go then as a Zombie Ghost Tour Guide! This I felt was especially appropriate seeing that the after-party was being held at the Old Adelaide Gaol where I both volunteer as a Ghost Tour Guide as well as use it as a venue for my Investigation Tours.

It was touch and go for a while! As usual, I had left all my planning till the 11th hour and suddenly found that Liquid Latex and false blood was now more like Liquid Gold! But fortunately, help was at hand with Krazy Kapers at Hillcrest, who seemed to be one of the few places that had the good foresight to order in plenty. Thank you Krazy Kapers! So after a visit and with my little carry bag of goodies, home I went and started my transformation.

First came the problem most women would sympathize with… what to wear! Apparently being a Zombie makes no difference to this common dilemma. I had already decided on a black coat, after all, it is my tour guide uniform. Hmm, but which one of the hundreds that I seem to have collected, was going to be the lucky one?!! I was certainly spoilt for choice. But yes, there it was… the expensive ‘Country Road’ one… after all, even a Zombie has to have some fashion sense. Ok, so I do have to admit that there WAS a touch of guilt when taking to such an expensive coat with a very sharp knife… but at the end of the day it was the least favourite of my coats… and hey.. it was all in a good cause!

Then, of course, the make-up was next. Before I used the facepaint I had purchased, however, I did wonder whether eyeshadow would give a better effect and of course there was only one place to find that in our house and it certainly wasn’t in my non-existent makeup bag… and so it was I sneaked into my teenage daughter’s bedroom. As it happens I personally think the eyeshadows did a more subtle job than the paints would have.

Meanwhile… back in the kitchen…. my husband and young son were hard at work on my entrails… a job that they didn’t look too keen on at first! But with a winning smile and lots of threats of starvation if they didn’t… I soon had them working feverishly away with my wonderful smelling recipe of weetbix soaked in fake blood. My neighbour had kindly offered to kill a sheep for me… but I thought that the taxi driver might be a bit touchy with that one, so I politely declined.

Anna arrived and we were soon set to go. “oops… I need to get some headache tablets” I remembered, then glanced at myself in the mirror. This should be good! So there I stood in the chemist, nobody saying a word about how I looked… but there was an air of sympathy for the poor afflicted person standing before them, that is until I broke the ice and apologised for my rather strange appearance but I was heading down to the Zombie Walk. After that, they were very chatty, once their discomfort at what had just walked in their shop was over. Even the customers suddenly became chatty finally realising that I wasn’t a dangerously deluded person. And then there was the lovely guy who pulled up alongside Anna, wound down his window and in a really concerned voice asked if she was alright. I guess other drivers aren’t used to people driving around with blood all over their faces! It is also good to know that there are still people out there that would do this.

Finally, we made it to the City and quickly located the start of the Zombie Walk and joined a very large crowd of the Undead, who were waiting to shuffle off on their journey through the streets of Adelaide. The police were also waiting… just to make sure that no zombies got too much out of control and decided to eat the rather nervous-looking people in their cars that had accidentally got caught up in the parade. The Zombies streamed past, including mini Zombies, the Zombie Jesus, the Zombie brides even the Zombie dog. Most scary of all would have to be the blue Zombie Smurfs! Most entertaining… well the prize would definitely have to be shared by the Zombie mime-artist and the band of escaped convicts who had their own dance routine. The police needn’t have worried though, the Zombies had obviously fed well before their take-over and so didn’t harass the onlookers too much.

This is the first Zombie Walk that I have been on and I have to say… it definitely won’t be my last. It was a great event with an even greater atmosphere and a lot of fun. If you haven’t done one before, it is worth making the effort to dress up and get down there for next time! You may even get as lucky as I did, and on your drive home get pulled over for the first time in years at a breathalyzer station and have to explain to a very concerned police officer that no… you hadn’t been beaten up and the blood pouring out of the bandages wasn’t real… honest! He laughed and said, “sorry… even Zombies have to be breathalysed”. As you can see here I sit laughing too… I was